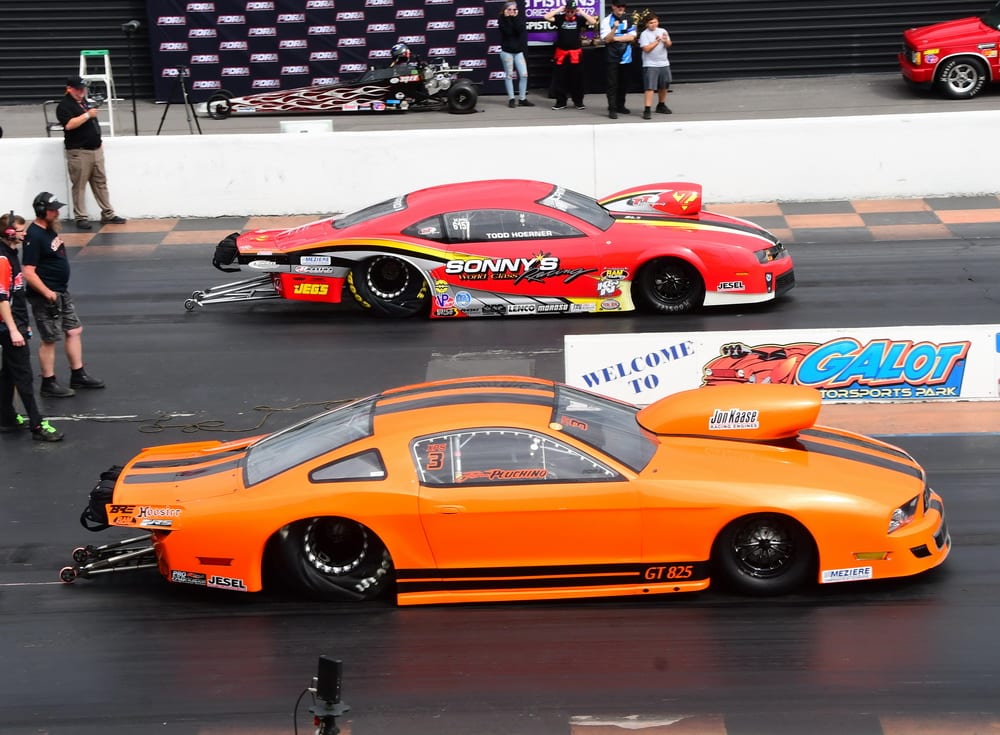 In Coolshirt Pro Jr. Dragster presented by Knoxtown Products, Grove City, Ohio’s Chris Ruzicka left the starting line first and went 7.970 to defeat local racer Thomas Davis’ 7.955, both a 7.90 dial-in. Christopher Suppers scored the Gilbert Motorsports Top Jr. Dragster win when he ran 8.910 on an 8.90 dial-in next to Bryce Pittman’s 8.010 on a 7.94 dial-in. 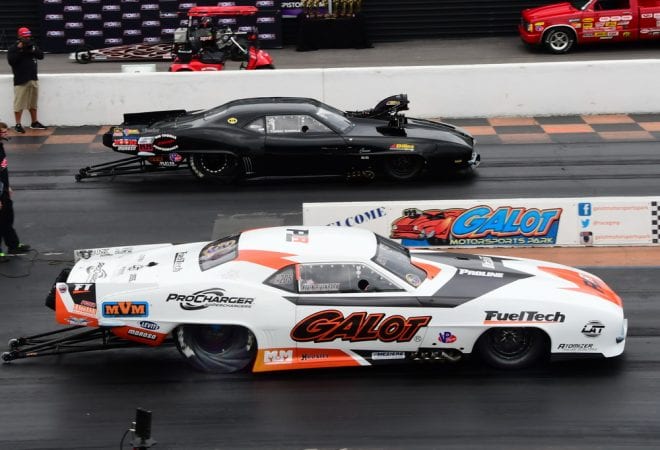 GALOT Motorsports’ own Kevin Rivenbark delivered a hometown win for team owner and track owner Earl Wells in the team’s Steve Petty-tuned, ProCharger-boosted ’69 Camaro. Rivenbark turned on the final-round win light with a 3.688-second pass at 203.37 mph to defeat reigning world champion Tommy D’Aprile and his 3.73 at 200.92.

“For my second win here at GALOT, it feels really good to win for Mr. Wells and all the GALOT family,” Rivenbark said. “It’s icing on the cake to be able to win (at GALOT Motorsports Park). I just hope we can continue this all year long, me and John (Strickland). We were hoping for an all-GALOT final, but it just didn’t happen that way today.”

Rivenbark qualified No. 1 and continued to set the pace for the Pro Boost field through eliminations, recording low ET of the first two rounds with a 3.661 over Chuck Ulsch and a 3.678 over Marc Caruso. He eased off the throttle in the semifinals after opponent Eric Gustafson went red, slowing to a 4.837 and giving up lane choice to D’Aprile.

For his spot in the final round, D’Aprile used a holeshot advantage and 3.712 to overcome Larry Higginbotham’s 3.709, then dodged a bullet when GALOT Motorsports driver John Strickland was .001 red on a 3.685 next to D’Aprile’s 3.752. Another strong starting-line advantage and 3.723 narrowly defeated Melanie Salemi’s 3.729 in the semifinals. 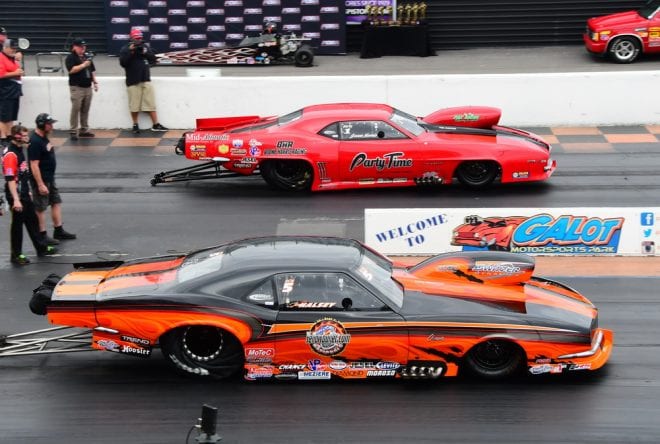 After posting a pair of runner-up finishes in 2018, nitrous Pro Modified veteran Jim Halsey scored his first-ever PDRA Pro Nitrous victory in his Fulton-powered, Switzer Dynamics-equipped ’68 Camaro. Halsey recorded a 3.693 at 206.70 in the final to take down defending world champion Jason Harris, who crossed the finish line with a 3.839 at 162.84 after a dramatic nitrous backfire.

“We struggled a little bit Thursday in qualifying, but once we made this morning’s run, we were pretty confident,” Halsey said. “I just had to do my job on the tree, especially with Jason because he’s probably one of the best at leaving. He showed that there, too.”

Halsey opened eliminations from the No. 7 spot, using a 3.793 to defeat Dane Wood before lowering the boom with a 3.671 at 207.46, one of the fastest runs in class history, to beat two-time world champion Tommy Franklin. A 3.702 victory over Randy Weatherford in the semifinals secured Halsey’s final-round berth. 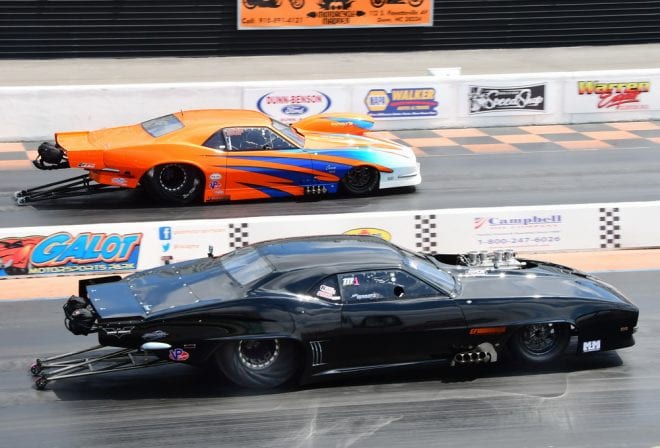 New Jersey racer Todd Fontana missed the 16-car Pro Nitrous field, but his weekend didn’t end there. Fontana and his Sonny’s-powered ’68 Camaro were placed in the new Pro Mod Challenge, a second-chance race for non-qualifiers in Pro Boost and Pro Nitrous. He used a 4.131 to defeat Bubba Turner in the opening round and stepped up to a strong 3.731 over Kurt Steding in the semifinals. He ran 4.095 at 187.68 to beat fellow Pro Nitrous racer John Vergotz and his 4.505 at 123.96 in the final round.

Past Extreme Pro Stock world champion John Pluchino and son Johnny both have numerous PDRA event victories to their name, but they hadn’t won together at the same race until the East Coast Nationals. Racing in his new-look ’13 Ford Mustang, John Pluchino left the starting line first in the final round and held the advantage through the finish line, posting a 4.085 at 177.04 to defeat Todd Hoerner’s 4.171 at 175.41. The younger Pluchino also turned on his win light around 10 minutes later.

“We talked on the way down here and our biggest thing was to always try and win together – double-up,” Pluchino explained. “We’ve been trying – I would win a race and he would go out, he would win a race and I would go out. So winning like this is a really big deal for me. We won Best Appearing Car, (Johnny) was the No. 1 qualifier – it was just a storybook weekend for us.”

Pluchino qualified No. 4 in his Kaase-powered Mustang and used quick, consistent reaction times and elapsed times to move through eliminations. He ran 4.055 to defeat JR Carr’s 4.086 in the opening round and 4.051 to take down No. 1 qualifier Jeff Dobbins’ 4.085.

Hoerner, making his return to Extreme Pro Stock after a four-year hiatus, qualified No. 3 in the Zarella family’s Sonny’s-powered ‘12 Camaro and cracked off a holeshot-win 4.102 over Dillon Voss’ 4.094 in the first round. Hoerner and John Montecalvo left the line together in the semis, but Hoerner powered ahead with a 4.131 over Montecalvo’s 4.264. 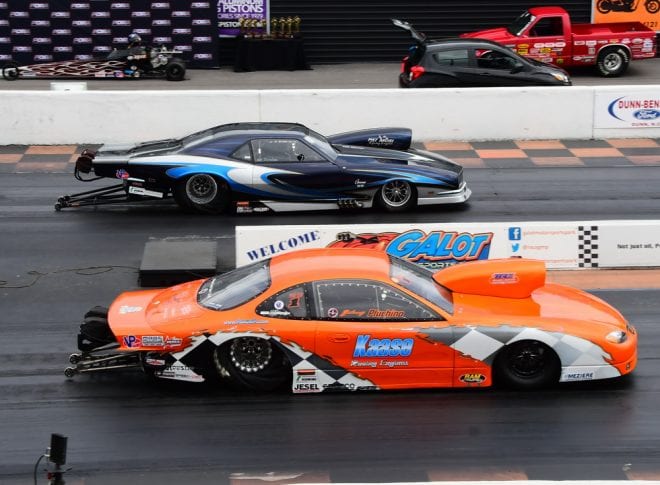 Just minutes after watching his father pick up the Extreme Pro Stock win, Johnny Pluchino held up to the pressure and notched his own event victory in Pro Outlaw 632. He drove Dominic Addeo’s Kaase-powered ‘06 Ford Escort to a 4.223 at 168.43 to defeat first-time finalist Wes Distefano and his 4.247 at 171.58.

“We’re still here – we’re not going away right now,” Pluchino said. “Everyone (in Pro Outlaw 632) picked up their stuff over the winter, so it’s going to be a tough year. It makes the racing more exciting and makes me yell in the car a little bit louder when the win light comes on. We’re excited, but at the same time we can’t stand still. In this sport, if you’re not improving your stuff every race, every day, every session, you’re going to get passed by. We’ll leave here, celebrate a little bit and we’ll go back to work.”

Distefano in his Musi-powered ‘68 Camaro set low ET of the weekend with his opening-round 4.195 over Bobby Starr. His 4.27 defeated Jeff Ensslin in the second round, then a 4.244 was enough to beat Walter Lannigan’s 4.247 by just three ten-thousandths of a second in the semis. 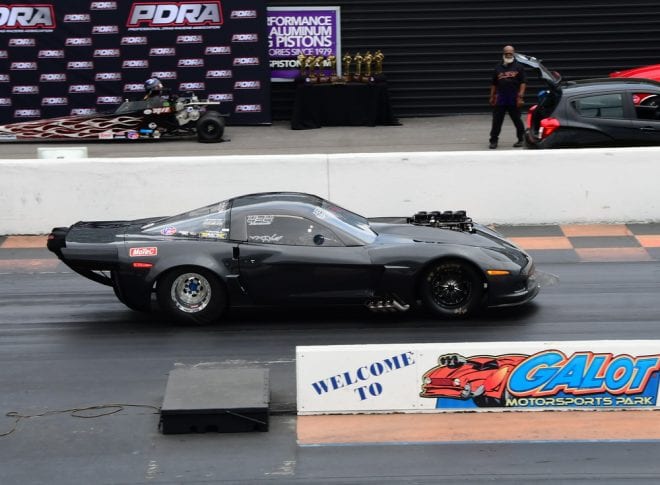 Mo Hall and his Fulton-powered ‘07 Corvette stole the show in Outlaw 10.5, as the nitrous-assisted entry qualified No. 1, set low ET of the weekend and won the event. Unopposed in the final round, Hall ran a 4.173 at 141.71 to finish the weekend.

Hall’s trip to the finals began with a weekend-best 3.853 over Joel Wensley followed by a 3.894 on a single to the semifinals. His 3.964 in the semis defeated Rich Bruder, who was driving Marty Robertson’s twin-turbocharged ‘68 Barracuda.

Hall was set to face No. 2 qualifier Tim Essick in the final, but Essick’s ProCharger-boosted “Brown Sugar” ‘18 Mustang was wounded after 4.0-second round wins over Tommy Mauro and Paul Major. He took the tree on a single in the semis before loading up for the weekend. 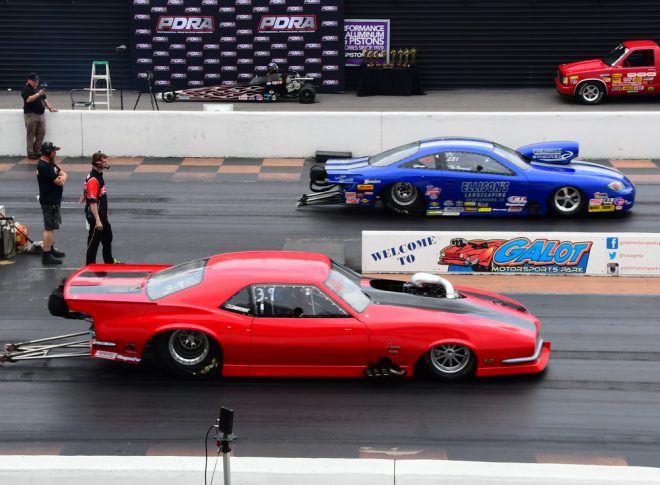 Ken “the Hammer” Ellison capitalized on a No. 16 qualifying spot in the Elite Top Sportsman field by moving past Steve Drongowski, Jamie Fowler and Travis “the Carolina Kid” Harvey to reach the final round in his Nesbitt-powered ‘06 Chevy Cobalt. Ellison then ran a 4.156 on a 4.19 dial-in to beat Jeremy Creasman’s 3.991 on a 3.96 dial-in to earn the event victory. 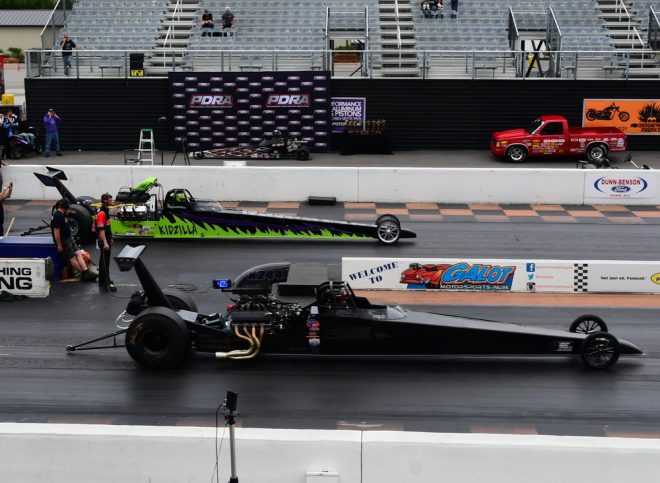 Second-generation drag racer and chassis builder Kellan Farmer earned his first Elite Top Dragster victory in the seat of his ‘19 Race Tech dragster. Farmer dispatched reigning world champion Chaz Silance in the opening round before defeating John Creasman and Kathy Fisher. Final-round opponent Robert Pickens went .016 red, but Farmer was ready with a 4.079 on a 4.05 dial-in.

The PDRA will return to action in May for the first of two stops at Virginia Motorsports Park, the Mid-Atlantic Showdown presented by Modern Racing, May 2-4 in Petersburg, Va.