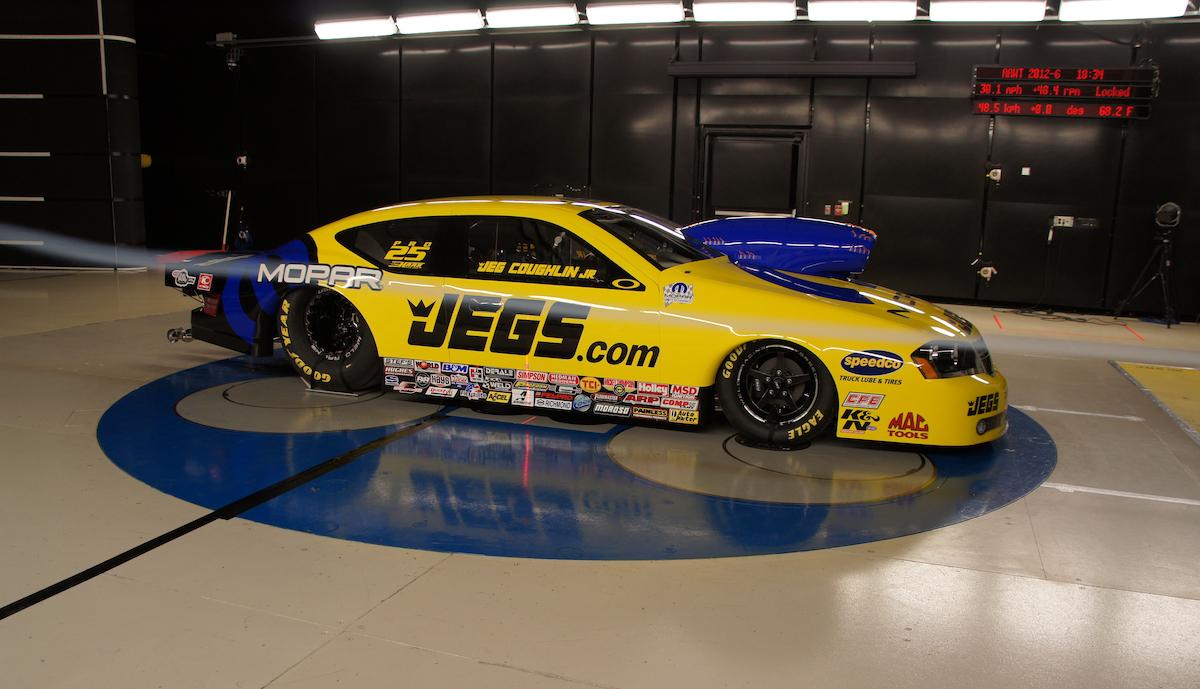 As important as wind tunnels have been to auto racing through the years, a surprisingly small percentage of racecar drivers have actually been to one in person. Jeg Coughlin Jr., the five-time NHRA Pro Stock world champion, can count himself among the lucky ones after a memorable trip to the Chrysler Technical Center, which houses one of only four full-size wind tunnels in the country.

“We got a little peek behind the magic curtain at CTC,” Coughlin said. “Throughout my career I’ve been fortunate enough to align with great partners, including the fine folks at Chrysler and Mopar, and they were kind enough to invite us to Ann Arbor (Mich.) to tour a facility that is so immense you need a GPS locator to get around.

“It was an incredible day with lots of really neat things to see, including some double, top-secret areas and assets. I think we walked several miles getting from one end to the other but it was all worth it, for sure.”

Coughlin isn’t exaggerating. The Chrysler Technical Center, which also serves as FCA’s corporate headquarters, boasts more than 5.4 million square feet of floor space, making it the second largest building in America. Only the Pentagon is bigger at 6.5 million square feet. The CTC facility sits on 465 acres of land just north of Detroit.

A file photo of Jeg Coughlin Jr.’s HEMI-powered JEGS.com Dodge Avenger, which he drove to the 2013 Pro Stock title, in the wind tunnel.

“As you walk from place to place you’re rewarded with the rich history of the company,” Coughlin said. “It was like being a kid on a school field trip to a massive museum, only it was all about cars. My kind of place.

“The wind tunnel is down below in a basement-type area and like everything else there it was massive. I’ve seen videos of my racecars in wind tunnels over the years but I’d never been to one before.

“When we arrived in that section of the building we passed a bunch of cars that were being prepped for their turn in the tunnel and many of them were covered in drapes because the stuff they were working on was secret. I saw a Viper with different rear wings and ground effects they wanted to test. It was like being in a James Bond movie.”

The research team had a passenger car in the tunnel when Coughlin’s group arrived. They were prepped to turn on the massive fan and allowed the visiting VIPs to stand in the tunnel for a few minutes as it ramped up.

“We walked down this long, bending ramp, which is all part of the design to put the air into the tunnel the way they want it,” Coughlin said. “They had a car tied down and were putting it through its paces at lower rates of wind speed. They even had the little vapor stream deal you see on TV shows that shows how the air flows over the car. We stayed in there for a bit but when they increased the gusts of wind they pulled us to safety.

“The science behind utilizing a wind tunnel is overwhelming. Just the way they generate the wind with this giant fan, the way they control the temperature inside the chamber, the tiny corrections they can make to the speed of the air, the positioning of the car on all these different axises, it’s so impressive. As a driver, you really start to understand how tiny little changes to the car can make a huge difference.”

The end result of the trip left Coughlin, who plans to retire from full-time racing at the end of 2020, feeling extremely confident about the design of both his racecars and his street cars.

“All of what they do there is about making cars safer, even in the wind tunnel,” Coughlin said. “Of course, with racecars there is a bigger emphasis on making them as slick and aerodynamic as possible to increase speed, but there is still a large focus on safety, just like with the street cars.

“The people there were special also. It’s always a treat to see American workers making iconic American cars with so much pride.”