Photo by Marc Gewertz/NHRA
In what was one of the most thrilling moments of the NHRA Mello Yello Drag Racing Series season, Clay Millican captured his first career Top Fuel victory a year ago with his win at Bristol Dragway. Headed back to his first race as defending champ, Millican is full of excitement approaching this weekend’s Fitzgerald USA NHRA Thunder Valley Nationals.
Millican has since made the quickest run in Top Fuel history and also won two races in the past month in his 10,000-horsepower Parts Plus/Great Clips dragster. Sitting second in Top Fuel points headed to Thunder Valley, Millican knows a lot of emotions from the memorable weekend are going to come flooding back when he arrives at Bristol Dragway.
“It’s going to be pretty awesome and pretty neat to go back where we got such a huge victory,” Millican said. “It was such a fun event and an emotional event, and I’m excited to go back and try to do it again. It’s an event that I will never forget and was a huge day in my career. To be driving back up the return road and seeing the drivers and fans congratulating me, it was just amazing and definitely something I’ll always remember. This is my home-state event and those fans let me know they were there and are going to be there again, and I’m definitely looking forward to it.” 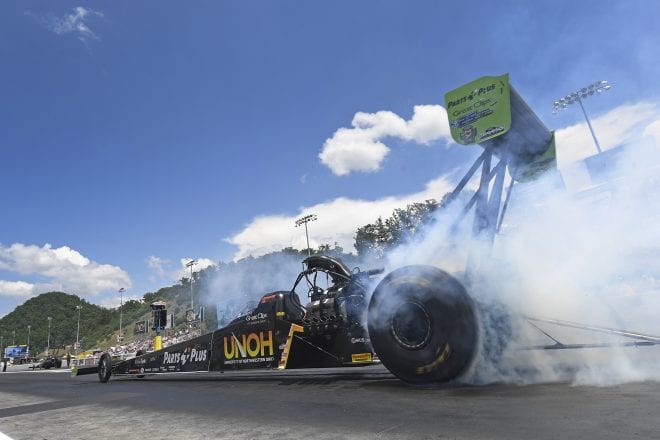 Millican (Top Fuel), Ron Capps (Funny Car), and Alex Laughlin (Pro Stock) were last year’s winners of an event that will be televised on FOX Sports 1, including final eliminations coverage starting at 7:30 p.m. (ET) on Sunday, June 17. It marks the 11th of 24 events during a 2018 season where even more things have come together for Millican and his standout team.
Millican has credited the work of talented crew chief David Grubnic, but getting that confidence after the Bristol win was a big deal as well. The team has been impressive throughout the 2018 campaign, posting back-to-back wins in Topeka and Chicago, and grabbing four No. 1 qualifiers this year. He only trails points leader Steve Torrence, who grabbed his fourth win of 2018 on Sunday in Richmond, and Millican believes his team can continue to be great this season.
“We thought we could win and we knew we could win, but to do it raises your confidence level,” Millican said. “Now, we’re not a one-hit wonder, we’re very high up in the points and our confidence level with this team is at an all-time high. More than anything now, we have to get a grip on a hot racetrack tune-up. But we’re happy to get back on the horse this weekend at a place we feel comfortable and have raced at many, many times. Going back there is a really comforting feeling.”
That could spell another win at Bristol Dragway for Millican, though he’ll also have to get past the likes of Richmond runner-up Doug Kalitta, Tony Schumacher, defending world champ Brittany Force, Antron Brown, and Terry McMillen to do it. But racing in Thunder Valley has always been special for Millican and a race the Drummonds, Tenn., native has circled on his calendar.
“It’s really a special place and one of the most picturesque places we go,” Millican said. “The place is just gorgeous. It’s an amazing facility in just a beautiful part of the country. I’m a Tennessee boy and I might be a little biased, but the place is just gorgeous. It’s just a great place to be and there’s nothing like hearing nitro cars in Thunder Valley. The sound is just tremendous.”

Funny Car points leader Courtney Force now has four wins in 2018 and will be after her first in Bristol. She will try to hold off the likes of defending world champ Robert Hight, Jack Beckman, 2016 world champ Ron Capps, J.R. Todd, who has two wins in 2018, and Matt Hagan.
Alex Laughlin won in Pro Stock last year and will try to become the ninth different winner in 2018. Points leader Greg Anderson is also looking for his first win, hoping to join a list that includes Jeg Coughlin, Bo Butner, Vincent Nobile, Erica Enders, Tanner Gray, Chris McGaha, and Deric Kramer.
The E3 Spark Plugs NHRA Pro Mod Drag Racing Series presented by J&A Service makes the sixth of 12 stops during its 2018 season in Bristol. The event also features thrilling competition in the NHRA Lucas Oil Drag Racing Series, showcasing the future stars of the sport, as well as the Mickey Thompson Tires NHRA Top Fuel Harley Drag Racing Series.
Those in attendance will have the once-in-a-lifetime opportunity to interact with some of the biggest names in drag racing during the NHRA Legends Tour. This will feature meet-and-greets, autograph sessions, and a variety of other activities. Legends scheduled to attend the Fitzgerald USA NHRA Thunder Valley Nationals include Shirley Muldowney, Roy Johnson, and Allen Johnson.
As always, fans can interact with their favorite drivers as they’re granted an exclusive pit pass to the most powerful and sensory-filled motorsports attraction on the planet. This unique opportunity gives fans direct access to the teams, allowing them to see firsthand the highly-skilled mechanics service their hot rods between rounds, and get autographs from their favorite NHRA drivers.
Fans also will want to visit NHRA’s popular Nitro Alley and Manufacturers Midway, where sponsors and race vendors create a carnival atmosphere, with interactive displays, simulated competitions, merchandise, food and fun for the entire family.
Mello Yello Drag Racing Series qualifying will feature two rounds at 4:30 and 7:30 p.m. on Friday, June 15 and the final two rounds of qualifying on Saturday, June 16, at 1 and 3:30 p.m. Final eliminations are scheduled for noon on Sunday, June 17.