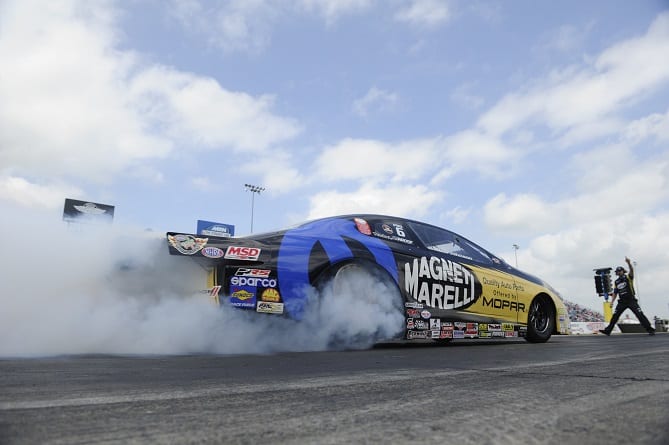 NHRA has announced a series of changes for the Pro Stock category designed to increase spectator appeal, make the class more relevant from a technology standpoint, and to enhance the overall pit experience for fans of the 200-mph factory hot rod class.

The changes will be mandated in two waves. Three changes will take effect at the NHRA Sonoma Nationals, July 31, 2015, while several others will not take effect until the 2016 NHRA Mello Yello Drag Racing Series season.

The three changes that are effective at Sonoma are designed to increase spectator appeal and enhance the overall pit experience for fans.

NHRA will require teams to back their racecars into the pits and leave engines uncovered so that spectators have better accessibility to see the racecars and interact with the drivers and crew members. A new rule also will discontinue the practice of crew members standing beside the cars to hold them in place as they begin their burnouts. Finally, NHRA will make it mandatory for teams to create automobile manufacturer identification headers visible on the racecars’ windshields up to a maximum of 4.5-inches high, but not smaller than 4.25-inches.

Starting on Jan. 1, 2016, NHRA will require all Pro Stock teams to equip their cars with electronically-controlled throttle body fuel injection systems, making engines more relevant from a technology standpoint. In order to reduce and control costs for the race teams, an NHRA-controlled 10,500 Rev Limiter will be added to the fuel injection systems.

NHRA also will require Pro Stock teams to remove all hood scoops and reduce the length of the wheelie bars to a length specified by the NHRA Tech Department. Those changes are designed to make the racecar designs more relevant and to boost spectator appeal by increasing the unpredictability of the class through more “wheels up” launches from the starting line.

In addition, NHRA will work with new television partner FOX Sports to improve coverage and maximize exposure of the Pro Stock category through increased driver and team profiles and technical features, in addition to expanded on-track racing coverage.

“Pro Stock racing has a tremendous history with NHRA and proves each weekend by the close side-by-side finishes that it is one of the most competitive forms of racing in all of motorsports,” said Peter Clifford, NHRA president. “Through these changes we hope to provide a platform so the Pro Stock class can evolve from a technological standpoint, yet reconnect with its roots by generating more interest and appeal among spectators.”