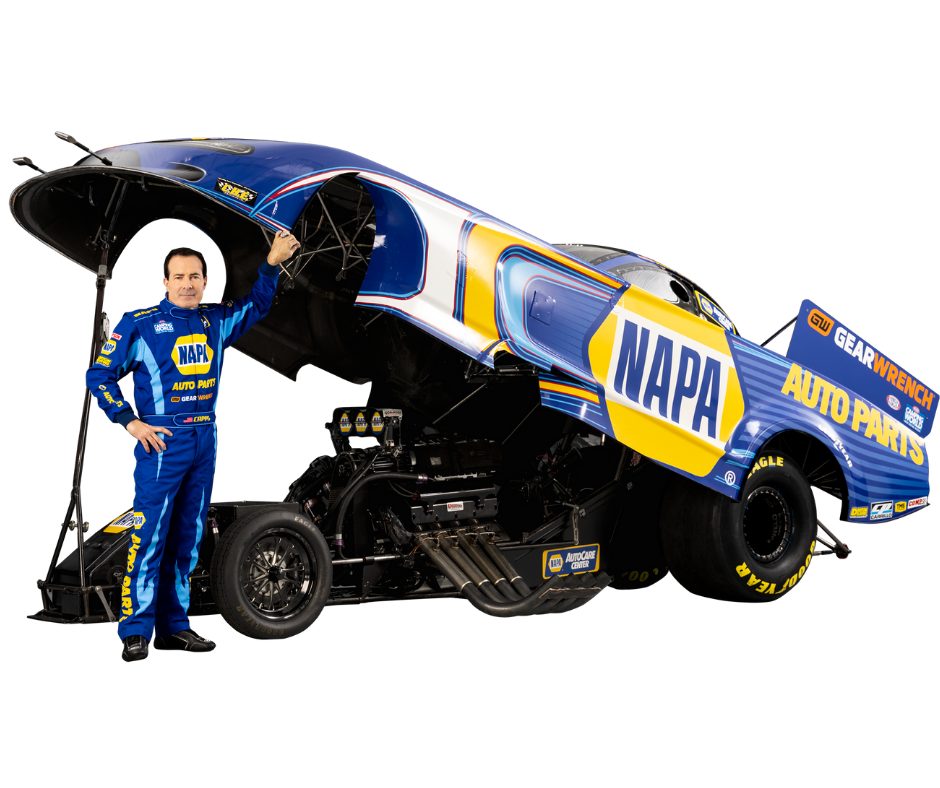 When two-time and defending NHRA world champion Ron Capps straps into his NAPA AUTO PARTS Funny Car during the PRO Nitro Spring Training test session this week, it will mark the first time he hits the track as both a team owner and driver.

For the past 27 years, Capps has enjoyed the perks of being a ‘hired driver.’ Shortly after having been crowned the 2021 Funny Car champ, Capps announced that he was departing his longtime home at Don Schumacher Racing to launch his own team, Ron Capps Motorsports, and has been tirelessly working around the clock to ensure he and his team are prepared to begin their title defense when the 2022 NHRA season kicks off in Pomona, Calif. next weekend.

While his two roles will intertwine in an official capacity for the first time during this week’s test session at Wild Horse Pass Motorsports Park in Chandler, Ariz., it certainly won’t be his first taste of juggling both his driving duties with his new team ownership responsibilities.

“It was last year at the U.S. Nationals race when I had the talk with Don Schumacher that I was going to branch off and do my own thing,” explained Capps, a 68-time race winner. “So, I had all of these different sponsors and options that we were pursuing throughout the Countdown and a lot of the behind-the-scenes things that go with starting a new team; that was all happening during the playoffs. A lot of people don’t realize that on top of trying to win a world championship, I also had all of that going on in my head.

“Obviously, this year will be quite different as now that it’s all come to fruition, it’s added a whole other level of responsibility, but at least I have some experience juggling both. Thankfully, it worked out well last year, and we got through it and won the championship, but I’m excited to find out exactly how it will be this year. I’m not sure yet if it’ll be something where it’s hard to take the ‘owner’ hat off and then switch fully into ‘driver’ mode. I’ve heard other driver-owners talk about that part of it, and I’m looking forward to seeing how I handle and adapt to all of that.”

While Capps is fortunate to have not only his entire championship-winning team, led by crew chiefs Dean ‘Guido’ Antonelli and John Medlen, and longtime partner NAPA AUTO PARTS seamlessly transitioning with him into this new chapter in his career, he is first to admit it’s been quite the tall order working to get everything ready in time to start the season. 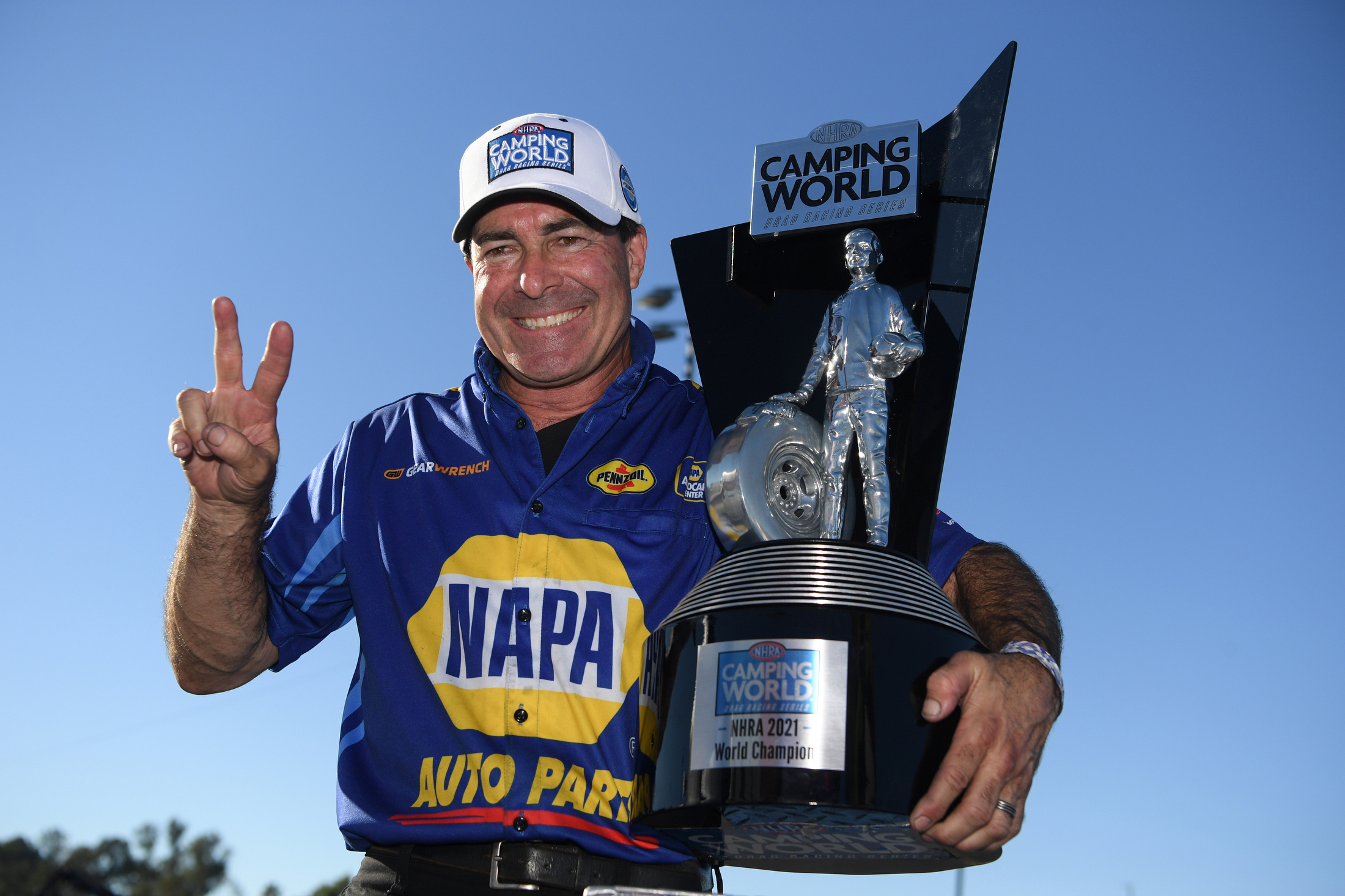 “I would say the biggest adjustment so far has been having to get a lot done in a very short period of time. Usually, for us drivers, you get a little time off after the NHRA Finals, and then you’ll fly out for a photoshoot here and there, PRI, and you’ll do all of the sponsor activation stuff in the off-season to get ready for the following season, but this year, with assembling a new operation, it’s a whole different ballgame. You’ve got to get the team set up with payroll, insurance, things like that.

“Trying to get all of the small details taken care of in such a short amount of time is so crucial, because not only do decisions need to be made and approvals need to be had, but you’ve got to make sure things such as crew uniforms, team merchandise for the midway, and all of those sorts of things are ordered in time to be ready by your Pomona deadline. Thankfully, I have a lot of people around me that have helped me a lot, but that was probably the biggest eye-opener in this whole process.”

As the second-winningest driver in the Funny Car class and one of the most tenured racers in the sport, Capps has been able to check many items off of his personal career bucket list, and has achieved a lot of ‘firsts.’ He is candid about the fact that the team ownership goal has been on his mind for quite some time, and when the opportunity presented itself during the 2021 season, he knew it was the right time to push forward and take that leap. But, he is not naïve to think there won’t be some growing pains.

“I know that it won’t be without its challenges. There will be those moments or those weekends where something will go wrong. I’m not looking forward to that. Having to put fires out here and there, things you hear about from other team owners, those are things I’m not looking forward to, but obviously no matter what happens, the good and the bad, at the end of the day, I know I’ll be able to look back and say ‘it’s ours.’ And, I’ve got to give so much credit to my wife, Shelley, and all that she’s taken on with all of the employees.

“I know that by far, all of the good will outweigh the bad, and it’s just nice to know that I have a little more control over my own destiny. Obviously, I’m taking on a lot more responsibility, but with that, I’m sure there will be more gratification. Antron (Brown) and I were talking about the craziness with all of the off-season things you never think about with the payroll, taxes, insurance, and just things like that, and we laughed about how at the end of the year, we’ll look back and say ‘man, it was so worth it.’

“The gratification from winning that first race as a team owner, and knowing Dean Antonelli and John Medlen and all of the crew, and all of the hard work during the off-season that we’ve all done will all be worth it when those big moments happen. Our NAPA team is on their way to testing now, and I’m proud that we pulled it all together in time, and now we get to do the fun part: race to defend our championship.”

When the 2022 season commences with the NHRA Winternationals in Pomona, Calif., Feb. 18 – 20, Capps and the NAPA AUTO PARTS team will begin their campaign for a third series title, and the first for Ron Capps Motorsports.