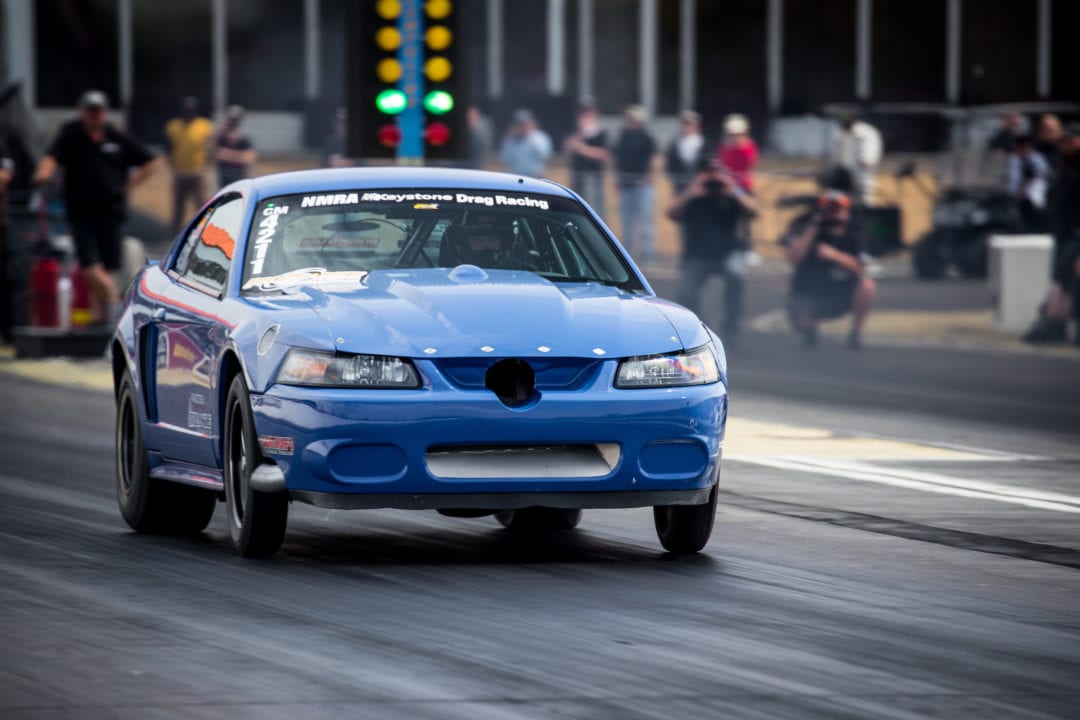 What was originally expected to be a disappointingly wet weekend wound up being unexpectedly epic. The 10th Annual NMRA/NMCA All-Star Nationals presented by MAHLE Motorsport kicked off the second stop on the NMRA Keystone Automotive Drag Racing tour for 2018 at Atlanta Dragway in Commerce, Georgia, and had a few good surprises in store for racers and fans. The rain stayed minimal, and the race – which included plenty of new records – was able to be run to completion. 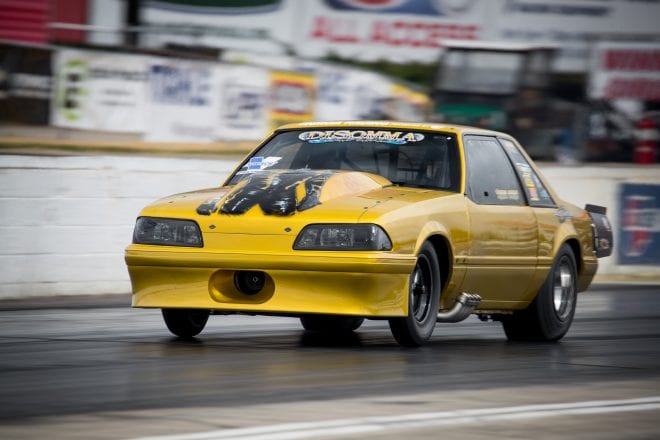 Racing Fuels Street Outlaw class, leading the way with a 4.285 at 170.39 mph pass out of his ProCharged ’96 Mustang but the final was all about Shawn Ayers and Andy Manson. Manson struggled and left the door wide open for Ayers to take the win on behalf of car owner and NFL Super Bowl winner, Fletcher Cox, with his 4.246 at 164.93 mph success story.

Behind the wheel of Adam Arndt’s ProCharger-enhanced ’90 Fox body, it was Brian Mitchell at the top of the qualifying list with a 7.392 at 184.12 mph hit in Edelbrock Renegade. When it came time to contest the all-turbo finals, though, it was the ’89 Mustang of Frank Varela up against Tony Hobson and his ’14 Mustang. Hobson made a valiant effort, but his 7.41 at 185.77 mph trip couldn’t hold off Hellion Turbo “B-Team” racer Frank Varela’s winning 7.35 at 185.43 mph pass.

In ProCharger Coyote Modified, it was Triangle Speed Shop’s Daniel Pachar and his ’04 Mustang leading the way after qualifying had been finalized thanks to a 7.643 at 171.10 mph blast. Pachar continued through to the finals where he met up with John Kauderer, who himself made a great comeback after popping the engine in his turbocharged ’14 Cobra Jet at the previous race in Florida. Unfortunately for Kauderer, he spun shortly after the hit and Pachar cruised into the Aerospace Components Winner’s Circle on his 7.58 at 172.32 mph run.

Qualifying in Steeda Limited Street saw a dozen capable entries in contention, but number one honors were claimed by Kelly Shotwell in his ’95 Cobra on an 8.860 at 154.62 mph run. Shotwell shook up eliminations and went home the big winner when his 8.747-second at 157.17 mph elapsed time out-paced Mike Washington who went 9.120 at 147.36 mph.

Bart Welte was the big man on campus in Richmond Gear Factory Stock when his ’89 Mustang stopped the clocks in 10.451-seconds at 126.59 mph and qualified in the top spot. Welte continued his domination of the class through eliminations and wound up in the finals where he dispatched Dan Ryntz with a winning 10.332 at 127.61 mph blast.

Meanwhile, in G-Force Racing Transmissions Coyote Stock, Darin Hendricks drove his ’93 Mustang Cobra to lead the way in qualifying with a 10.252 at 129.57 mph trip. Hendricks was on point and cruised through eliminations easily, taking down Clair Stewart II in the finals when Stewart had a -0.107-second reaction time and Hendricks made it official with a 10.207 at 130.14 mph run down the 1320.

Nearly two dozen drivers were on the property for Exedy Racing Clutch Modular Muscle, but it was Peter Blosser who had the quickest reaction time with a perfect 0.000-second light while driving his ’02 Mustang. When eliminations wrapped up, Jason Henson was named the winner as he ran 11.99 at 107.22 mph in his ’03 Mach 1 and Shane Williams took home the runner-up title.

The 2017 Roush Performance Super Stang champion, Marvin Knack, showed why his ’11 Mustang wears the “1” competition on its side as he drilled the tree with a 0.009-second reaction time and wound up at the top of the qualifying order for the class. Russell Haskins, however, finished out the weekend on a high note when his 12.74 at 102.58 mph effort on his ’18 Mustang’s 12.60 dial in earned him the victory over Bobby Barrick.

The large, twenty-seven car ARP Open Comp field was a tough one, but Kenny Thomas didn’t let the pressure get to him and produced a 0.002-second reaction time with his ’70 Mustang to start eliminations in the number one position. It was Gordon Harlow, however, who took the overall win when he ran a 10.14-second elapsed time at the end of the night while Woody Pack red lighted at the start.

Robert Saner’s quick 0.003-second reaction time in his ’03 Lightning during Detroit Locker Truck & Lightning qualifying ranked him number one. When the field was whittled away, it was Fred Wade who turned the win light on in his lane behind the wheel of his ’04 Lightning when he went 10.45 at 131.29 mph on his 10.40 index and Wade Trammell was close but not close enough.

In the Race Star Wheels Ford Muscle index class, Stephanie Davies ran nearly dead-on to her 9.75-second index when she coaxed a cool 9.752-second run from her ’92 Mustang but it was hometown hero Danny Towe who bested them all in his ’70 Mustang when he inched through to success with the lesser of two evils in a double-breakout final round against Brian Parker. 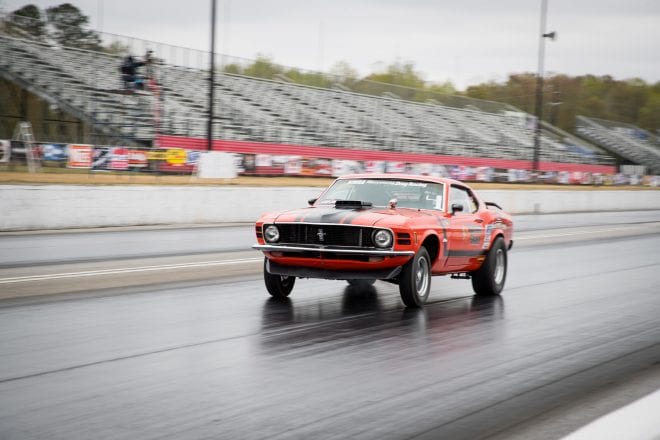 The special Street Outlaw All-Star Shootout class paired the 2017 NMRA and NMCA Street Outlaw champions along with wildcard and blocker drivers in a field of eight, but Andy Manson and Daniel Pharris were the last men standing when the final round rolled around. The two racers left the line side-by-side and Pharris was coming in hot in the right lane as they approached the finish line, but Manson made his move and took the win in an incredibly close drag race, going 4.301 at 163 mph to defeat Pharris’s 4.309 at 172 mph effort.

In the NMRA vs NMCA Sealed Stock Shootout, it was an all-NMCA final as Haley Rounsavall and Jesse Wilson faced each other in the finals. Ultimately it was Wilson who took the win and the honors for the National Muscle Car Association team.

Finally, in the Open Comp shootout, it was a real barn burner that pitted 2017 LME Street King champion Kurt Anderson against the NMCA’s 2017 Open Comp and Stock/Super Stock champion Ricky Pennington, the latter of which secured the victory.

Tons of QA1 True Street hopefuls brought their street legal rides out to test their mettle, but it was Ben Calimer and his ’16 Mustang that won the class outright with a 9.912-second average. Behind him was John Baum who earned the runner-up honors with a 10.111-second average. Winning the 10-second group was Jason Wagoner and his ’14 Mustang clocking an average time of 10.219-seconds, while Scott Boda scored the 11-second win with an 11.041-second average. Topping the 12-second section with a 12.092 average was Mike Baker behind the wheel of his ’91 Mustang, Scott Ray picked up a win in his ’12 Ford averaging 13.684-seconds, Gaston Brown was the quickest for the 14-second cars with a 14.039 average from his ’05 Mustang GT, Melanie Myers’s 15.058 average won the 15-second group in her ’98 Mustang, and James Rowell rounded things out earning the 10-second win with a 10.079-second average in his ’14 Mustang GT.