Dixon, the three-time NHRA Mello Yello Top Fuel champion, and veteran engine tuner Lee Beard, the director of operations, have been in the Houston winner’s circle many times in the past and they look forward to putting Escopeta Oil and Gas in victory lane this weekend.

“I am very excited about racing in Houston,” said Beard, a three-time winner at Houston.  “Over the years I have had success in Houston.  Giving a crossover driver from motorcycle racing, rookie then and now world champion,  Antron Brown, his first win was certainly one of the highlights. This is the first time that the Rapisarda Racing Team has had a corporate sponsor on its car since Santo Rapisarda started racing here in the USA. Escopeta Oil and Gas is certainly a great company that represents the industry that has made Houston–the oil industry.”

Escopeta Oil and Gas Company, led by company president Danny Davis, is a Houston-based independent oil and gas company and has almost 40 years of experience in all aspects of leasing, drilling and operating in the energy arena.  Escopeta currently owns a major lease position in the panhandle of Texas which is beginning to develop approximately one billion barrels of oil from the most emerging resource play in the state of Texas. 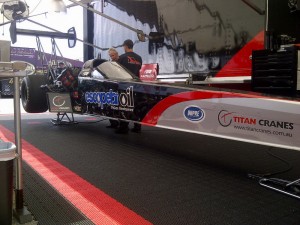 “We are very pleased to be involved in the Houston event with Lee, Larry and the Rapisarda team,” said Davis.  “What is more American than drag racing? And a lot of the fuel used at the track comes from right here in Texas.  There is nothing more exciting that watching two Top Fuel cars run side-by-side.

“We have been running the older cylinder heads so far this year,” said Dixon.  “We just got the new 2013 heads and I think we can get back to running with the top contenders.  We got into the 3.70s with the old equipment, so I think everyone with the Rapisarda squad is excited about the Houston race.  Adding the Houston Oil companies is big for our team too.”

In addition to the Escopeta Oil sponsorship, Rapisardo Autosport International will have another Houston-based corporation involved with the team this weekend at Houston with Dupre Energy Services participating in the Spring Nationals.

“Dupre Energy is a leader in its category and we are happy to have the company involved with us this weekend as well,” said Beard.  “The Houston race has always been a good one and we want these companies to see the excitement surrounding the NHRA Mello Yello Series.”