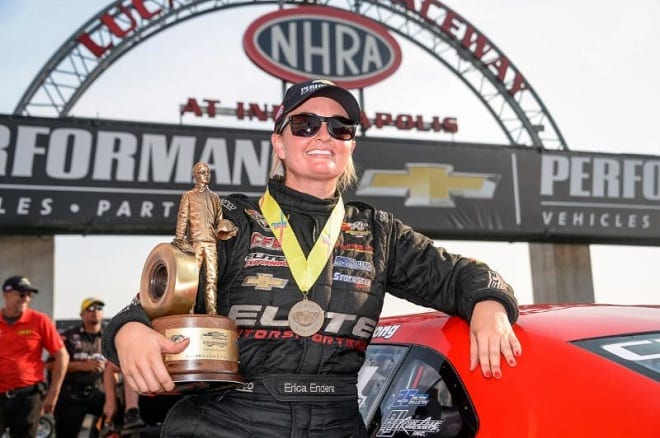 Racing in Red, the film documenting Erica Enders’ charge to the 2014 Pro Stock world championship, will premiere in southern California before the start of the 2016 NHRA Mello Yello Drag Racing Series.

A few lucky fans can win tickets to the invitation-only event, as well as meet Enders, through a special Twitter contest to be held Feb. 4. On that day, fans should use the hashtag #racinginred and tweet why they should win the contest, and Enders will choose her favorite entry.

To purchase a copy of the film, visit RacingInRed.com. The film should be available in mid-February.

Before the 2014 season, Elite team owner Richard Freeman partnered with Danielson Entertainment Group, LLC, and Design con Carne, Inc., to capture on film the ins and outs of what turned out to be an historic season.

The filmmaking team traveled with Enders and her Elite team through most of the triumphant 2014 season, capturing behind-the-scenes moments that most fans don’t get to see. They were able to document the highs and lows of Enders’ season, getting portraits of Enders and her team members, from owner Freeman and his family to crew chiefs Rick and Rickie Jones.

“For them to have been there and captured our dream season is pretty surreal,” Enders said. “I can’t wait to see the finished product, and I know it will give the fans a behind-the-scenes look at exactly what we went through to accomplish what we did.”