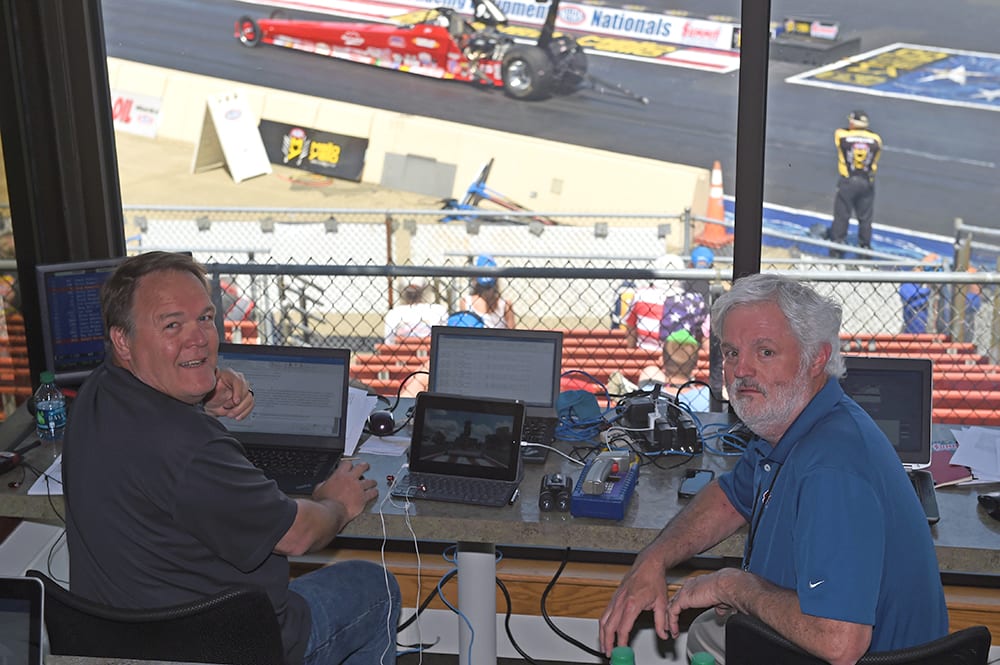 From his spot in the media center, Rick Green has witnessed thousands upon thousands of passes down quarter-mile and eighth-mile dragstrips across the country. Green began reporting the sport’s all-important numbers for the drag racing section of a forum on CompuServe in 1996. He later partnered with fellow forum members Ed Dykes and Larry Sullivan to start FastNews Network, which is contracted by Summit Racing Equipment to provide the content for their drag racing news website, DragRaceCentral.com. The site’s comprehensive, round-by-round results postings are a necessity for anyone who has more than a casual interest in drag racing: drivers, race team members, media members and fans.

Green, currently the president of FastNews Network, maintains a full schedule of NHRA national events and the occasional PDRA race, where he and other FastNews Network reporters use the software programs developed by Sullivan to extract data from the Compulink timing system and transmit it to the world through Drag Race Central. He rarely leaves his seat for more than a few minutes, from the time the first pair of cars goes down the track until the last pair makes the turnoff at the end of the night.

This wealth of experience has led Green to form a variety of opinions about the state of the sport – opinions he rarely shares with anyone other than his colleagues in the media center. Speaking to us during a brief oildown at the NHRA U.S. Nationals in Indianapolis, Green shared his thoughts on the sport and how it’s changed during his time as a reporter.

The growth of the internet, especially the social media boom, has brought out new ways of reporting drag racing news and results, but FastNews and Drag Race Central have stood by their tried-and-true methods. Why is that?

This is what we do, and we’re good at it. That’s why we’ve stayed doing this the way we have. I don’t know if we should’ve tried to be more proactive when the social media stuff started coming out, but we just haven’t.

The one thing about social media is there’s no continuity to it in that there’s piecemeal. If you like Super Stock, you’ll post about Super Stock. If you like John Force, you’ll post about John Force, but you won’t post about the whole Funny Car category. One thing that we do have is the results are there and they’re there forever to go back and look at. They might not be as quick as tweeting out right after the run, but we’re still pretty damn quick in getting our results out – and accurately. I think that’s what we can stand by.

You’ve experienced so many incredible moments in the sport’s recent history. What are some of the most memorable events you witnessed?

I think it was actually at the first event I reported on. It was a Friday-night session at Topeka and it was like one national record right after another. Joe Amato recorded the first sub-4.6-second run in Top Fuel, then Blaine Johnson went out and beat that record. They had run their backups in the afternoon, then that night it was just one record right after another.

Here recently, the explosion of the Funny Car class has been fun to watch. To see a Funny Car run almost 340 mph is pretty incredible. I’m more of an et guy normally, but I don’t know that that speed isn’t just jaw-dropping.

In the negative notes, you have the year of Indy when Elmer Trett and Blaine Johnson were killed. Those are memorable because those was such tragic moments on back-to-back days – it was just sad.

We’re seeing a lot of discussions lately that center on NHRA Pro Stock. People say the class is dying. Is that something you believe to be true?

I’ve seen this sport ebb and flow. When one of the fuel classes was a stronger category than the other, everybody was talking, ‘Ah, we just need to go to one or the other, but not have both,’ yet both of them came back. The latest rage for the last few years is how Pro Stock is dying. I don’t believe that. I believe it needs some help, but I don’t have the answers to help it. It’s the same across the pro categories – it’s just expensive to race. I don’t know that 16-car fields are the way to go. You’re not going to have the large showings anymore, but look at this race. You have 21 Pro Stock cars, 22 Pro Stock Motorcycles, 18 Top Fuelers and 18 Funny Cars. I guess I don’t know that the nail in the coffin is there for Pro Stock.

Some people say Pro Stock should be replaced by one of the classes growing in popularity, like Pro Mod or Factory Stock. Do you think that could be the answer?

It’s all about what you like. Pro Mod is a different animal compared to Pro Stock, so I don’t know that it’s going to be a replacement for the Pro Stock fan. There’s a lot of fans of the Factory Stock class, and they say that’s the replacement for Pro Stock. Well, it’s a cool category, but unless you do something to make them really fast, I don’t see it replacing Pro Stock – unless you do all kinds of modifications where they’re not factory-stock, then you’re almost back to what you’ve got now. You don’t want to see slow Pro Stockers. You already saw the slowing down of the Pro Stockers (with the introduction of EFI).

You get to see a wide variety of classes and forms of drag racing through your reporting. How would you rate the overall health of the sport?