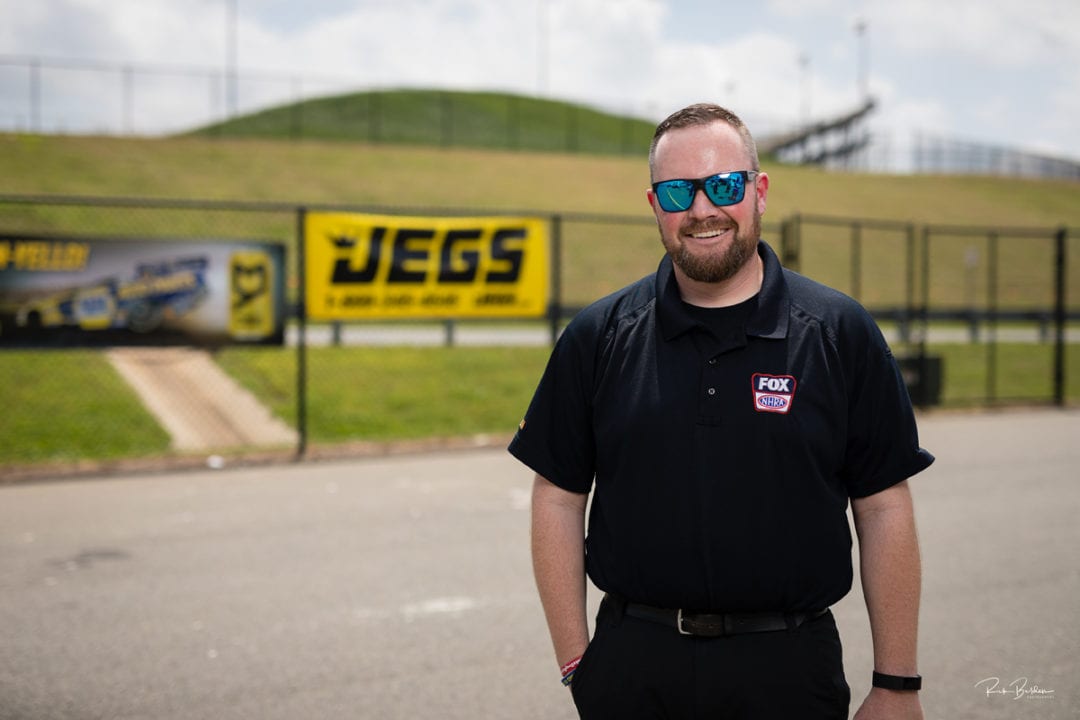 Anyone who consumes any sort of drag racing content this year is bound to see or hear the words of Brian Lohnes. That’s not necessarily his intention, just a consequence of the passionate New Englander’s quest to spend his days doing “race car stuff”. As a writer, he’s the co-founder and Editor-in-Chief at Bangshift.com and a contributing columnist for National Dragster, Chevy High Performance, Diesel Power, and Mopar Muscle magazines. He’s one of the key members of NHRA’s national event announcing team, also stepping behind the mic to announce at select NMCA/NMRA races and Donald “Duck” Long’s Lights Out and No Mercy races. If that wasn’t enough, Lohnes is also a co-host on Motorhead Garage, an automotive how-to show airing on Velocity and MAVTV. “If anybody waves three dollars in front of my face, I’ll figure out a way to snatch it,” Lohnes laughs.

Another project Lohnes has signed on for is a new reality show concept for Motor Trend On Demand, available across a variety of streaming platforms like Apple TV, Google Chromecast and Amazon Fire TV. It’s called Put Up or Shut Up, and it will feature fast cars and outspoken drivers competing match-race-style for $10,000. The show is predominately based around drag racing, though a variety of motorsports will be featured.

DRAG ILLUSTRATED caught up with Lohnes between sportsman qualifying sessions at the NHRA Route 66 Nationals in Joliet, Illinois, to talk about announcing races, traveling the country and finding the next generation of fans and announcers.

Of all the various job titles you have, is there one role that really stands out as your favorite?

You know, it’s tough to say. I’ve loved cars since I was a kid, so all of this is my favorite thing. For instance, with Bangshift, on a day-to-day basis I get to write content that I think is interesting. I get to learn a lot of stuff, whether it’s history or something that I flat-out didn’t know about that people tip me off to. In terms of the NHRA announcing gig, as a kid who grew up around drag racing and loving the sport, this is pretty much a dream job. I don’t think there’s anyone who’s grabbed a microphone in an announcing situation and didn’t think to themselves, Maybe I can announce national events someday. I really enjoying doing every one of these things. If I didn’t enjoy doing them, I wouldn’t do it. If this stuff wasn’t appealing to me on an intellectual level or an entertainment level, I just wouldn’t do it. There are bits and pieces of all of it that are my favorite.

Your racing travels are well-documented online, be it checking out deserted drag strips while on family vacations or visiting local landmarks on the way to an NHRA race. When it comes to the traveling, how important to you is the journey, not just the destination?

It’s a huge part of it. Since I was a kid, I’ve loved going places and seeing stuff. I’ve always been fascinated by our country, and then to be able to see it in conjunction with being paid to do race car stuff makes it even better.

I’ll tell you a story. When I got out of college, I was doing these different jobs on the side. I graduated college with a journalism degree and a commercial driver’s license from working on busses and trucks at a diesel service shop. A CDL was worth way more than a journalism degree, so I actually took a job as a truck driver. I delivered 5-gallon bottles of water to offices. I had T.F. Green Airport in Rhode Island as one of my customers and I’d have to go in there once or twice a week to make deliveries. It used to kill me – it used to literally make me want to jump out a window – because all these people were going somewhere. Whether it was for business or entertainment, they were all getting on a plane and going somewhere.

Probably more than I should, I really enjoy the travel aspect of all the stuff I do. I know some people hate it and they don’t like getting on planes or being at the airport, but I think airports are cool. I think an airport is like a perpetual motion machine – everybody is going somewhere, and I find that fascinating. I honestly love the travel aspect. Like last night, I went to JC’s Pub with (Alan) Reinhart to have dinner and see the shrine of Chris Karamesines; it’s freakin’ great.

You’re one of the younger, open-minded individuals involved in the drag racing media. How important is it to you to create new, exciting content to keep people interested?

It’s super important. I think the sport, in a lot of ways, goes through these reinvention cycles and different things change. Obviously, there are some constants in there that stay the same. But I think a show like Put Up or Shut Up is going to appeal to a way broader audience than just the typical drag racing fan. When the opportunity came up to do this show and we were talking about it, one of my concerns was I didn’t want it to be some over-the-top, stupid reality TV thing. If we’re going to do this, I really want it to be authentic. If there is some drama between the guys, great, but I don’t want to manufacture it. People, especially racing fans, can see through the fake stuff immediately. To me, we’re trying to create something in the sport that is legitimate, that is going to expose people to new things. Maybe people have no idea that there are guys who run 20,000-pound big rigs that run twelves. Or maybe there are people who want to see some crazy match-up that we can put together.

As an announcer, what are some things you see that racers can do to get more exposure for themselves and their sponsors?

What racers need to do is put a little work into it. We (announcers) can’t talk to everybody. I love going to the pits; I try to go to the pits every day, but I can’t talk to everybody. You need to come find me. You know where the announcers are; we’re going to be in the tower. What can the racer do? Go to the one place he knows where he can find us, and leave us something about him to talk about over the course of the weekend. It’s a little bit of extra effort and extra humility, and that’s a weird thing to say, but there are guys who are embarrassed or they’re shy to come up. These guys get in a race car and they’re a freakin’ beast, but they’re very hesitant to come talk to us. I think what people need to understand is that our job is as much for them as it is for the fans. We want to help these guys out as much as possible, but we also need a little bit of help to do it.

Is there anything else that most people don’t know about announcing?

We, as a sport, need more voices. We need more guys out there putting the effort in to be serious about doing this announcing thing. And it’s not just NHRA races, it’s across the sport. I have more opportunity than I could ever possibly engage in because no one knows who to pick up the phone and call. If you’ve got it in your head that this announcing thing might be fun, call your local track and put in the work and do it. We need the help.