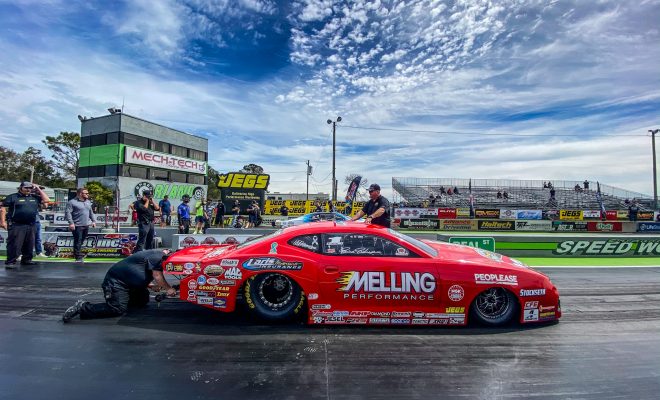 Pro Stock stars of the NHRA have officially been added to the lineup of the JEGS- SFG Million at US 131 Motorsports Park in Martin, Michigan, June 29- July 5. This event will be the highest paying drag race in history, awarding $1,100,000 to a single winner on Saturday, July 4th.

If history wasn’t enough to attract Michigan race fans to this event, Kyle Riley, CEO of SFG Promotions has made the race even more exciting by coordinating runs on Friday and Saturday (July 3-4) by Erica Enders, Jeg Coughlin, Alex Laughlin, and Aaron Stanfield in their 200+ mph Elite Motorsports Pro Stock cars. This exhibition is part of a larger scheme to entertain fans at the JEGS-SFG Million, called the Million Dollar Freedom Fair. 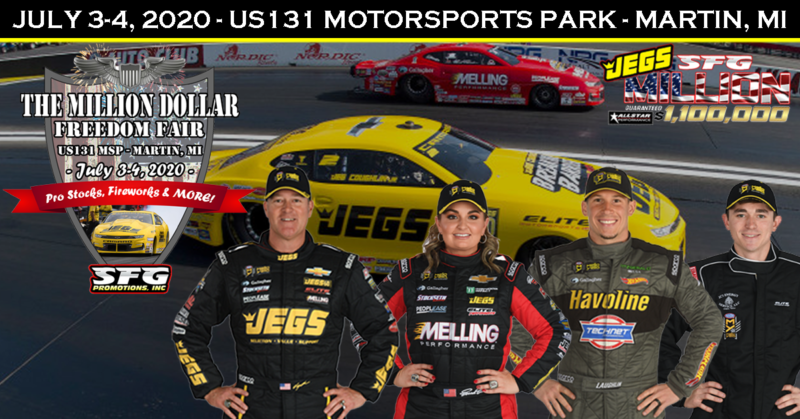 “This is a great deal that’ll make this historic race that much more exciting,” says Riley. “I’m working to get spectators in the stands to grow the awareness of bracket racing and hopefully make some fans of it. I also want to bring a national event feel to this race. On top of the money, having fans in the stands will make this race really special for our racers. The health of the Pro Stock class is on the rise, and to have four of the best Pro Stockers in the country at this race is just going to be awesome. To have one of them be an SFG partner [Jeg Coughlin] makes it even cooler. It’s going to be a great show in Michigan.”

The new will be meeting the old at US 131 Motorsports Park, as four Nostalgia Pro Stock cars will also be a part of the show. John Dembrock in the Grumpy Vega, Mike Ruth in the Bob Glidden Fairmont, Ted Peters in the Wayne County Daytona, and Mark Pappas in the Reher-Morrison Camaro will each be in attendance.

Additionally, fair attractions and traditional carnival food will be staples of this historic million dollar weekend, with attractions to be operated behind both grandstands. Michigan race fans are in for great fun, great food, and great racing for just $20 when you pre-purchase tickets (purchase link available soon), or $30 at the gate of the Million Dollar Freedom Fair, July 3-4 at US 131 Motorsports Park.