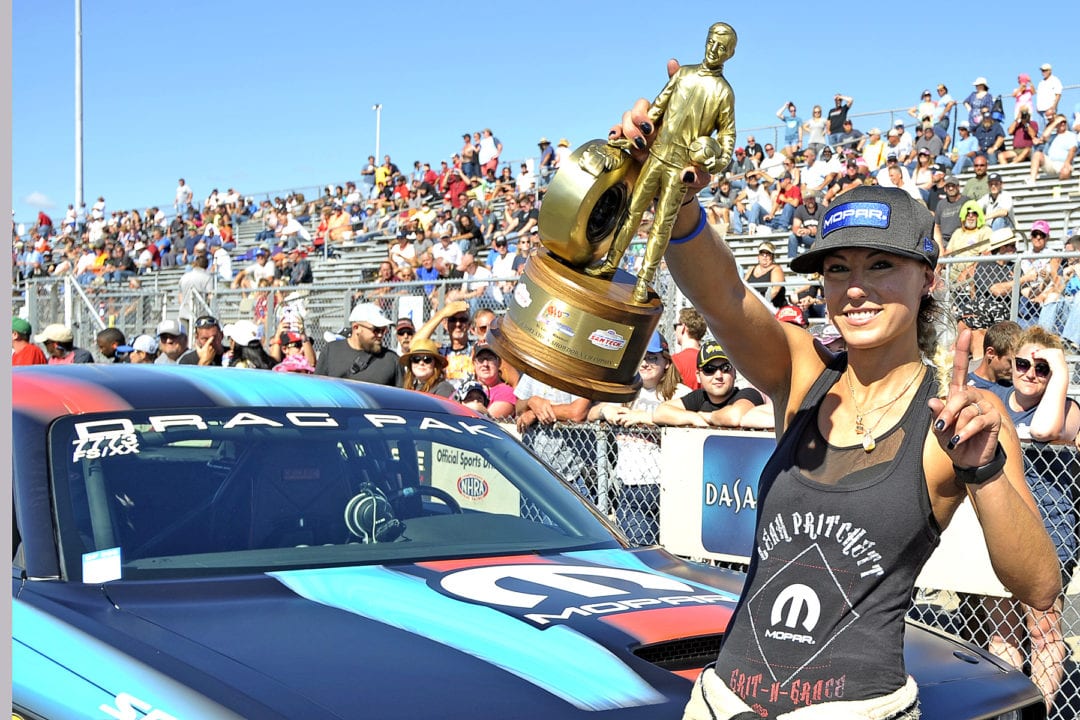 Mopar Dodge Challenger Drag Pak driver Leah Pritchett continued to own the Factory Stock Showdown class, celebrating her second consecutive event win one day after becoming first in the class to run in the seven-second range during the AAA Insurance NHRA Midwest Nationals at Gateway Motorsports Park near St. Louis.

The double-duty driver made history during Factory Stock Showdown qualifying on Saturday, shrugging off a recent decision by the NHRA to effectively slap a 50-lb. weight handicap on all Mopar Dodge Challenger Drag Pak vehicles to post a 7.936-second E.T. and become the first NHRA driver in the class to make a hit in the seven-second range.

Despite owning a new entry in the NHRA record books, Pritchett would wrap up qualifying No. 2 after her teammate Mark Pawuk ran even lower with a 7.929 E.T. to earn the pole.

Pritchett, winner and No. 1 qualifier at the most recent NHRA Factory Stock Showdown event at the NHRA U.S. Nationals earlier this month, kept the seven-second train rolling with a 7.948 pass at 172.70-mph to defeat former NHRA Pro Stock racer Allen Johnson in the opening round. She used an 8.031-second pass to send home Pete Gasko Jr. in the quarterfinals and then knocked out Arthur Kohn in the semifinals with an 8.011 E.T.

In the final, Pritchett nudged up near the seven-second range in an easy defeat of Stephen Bell, who knocked out her teammate Pawuk in round two, unleashing her Kevin Helms-tuned Drag Pak with a blistering 8.001 E.T. to claim victory after Bell experienced problems early. 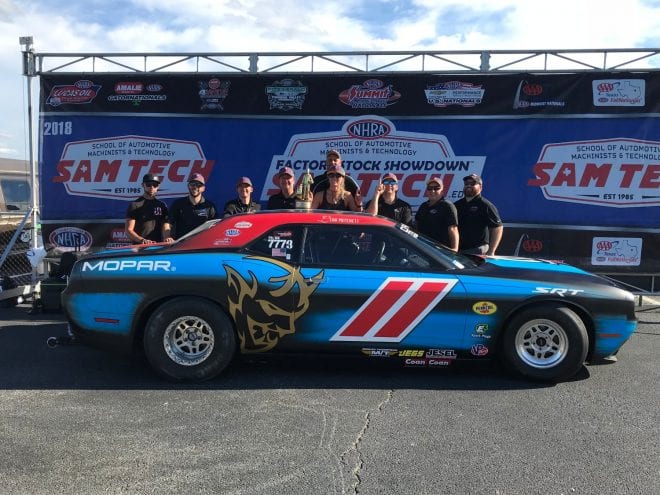 “Incredible weekend by the ‘el Bandito’ team with Mopar,” said Pritchett who moved up to the No. 2 spot in the FSXX standings. “We carried that momentum from the U.S. Nationals without a hiccup. That extra 25-pounds didn’t seem to faze this Mopar power. I’m not saying it was easy by any means. We put it to it every single round and that’s extremely impressive and a testament to the durability of the race cars, the powerplant and the people that Schumacher has put in place to run this program.

“We are in a fantastic spot, second place in the points. It’s like Christmas Eve going into these last races. I really wouldn’t want a different perspective. We have a little bit of freshening up to do but overall this has been an incredible weekend of just straight teamwork all the way around, and the Mopar power just continues to show through and we continue to want to show up.”