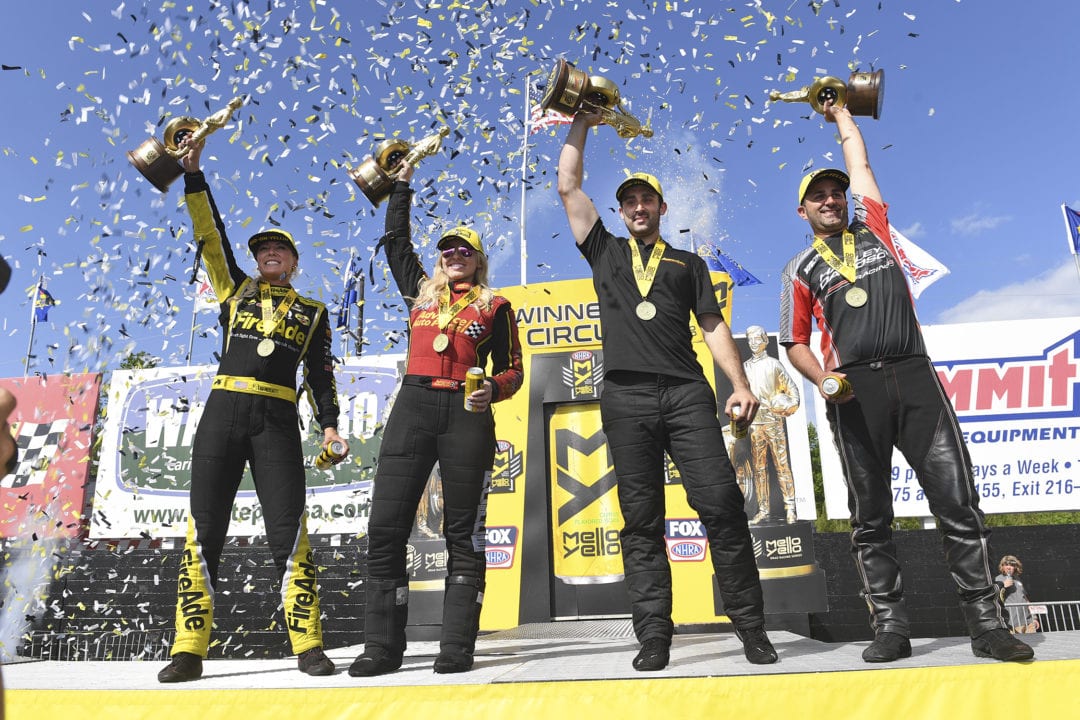 Pritchett locked in her first Top Fuel win of the season as she piloted her FireAde dragster to a pass of 3.874-seconds at 322.42 mph during the final round of eliminations to defeat Blake Alexander. This is her first Wally since Brainerd 2017, first event victory at Atlanta Raceway, and sixth overall. Pritchett is the first of Don Schumacher Racing’s Top Fuel drivers to go to the winner’s circle this season. 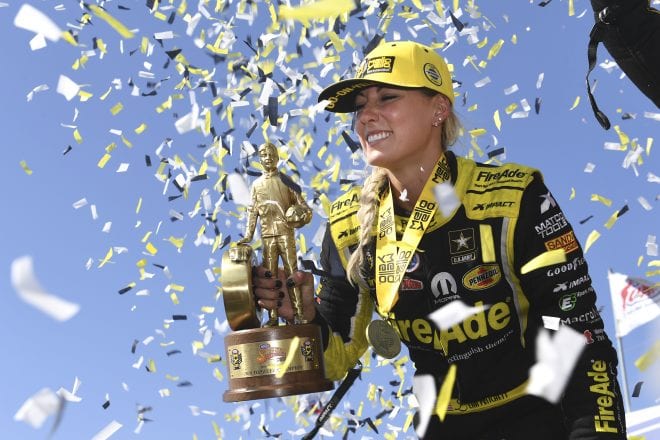 “We were racing one round at a time,” Prichett stated. “The conditions out there were varying all weekend long and that’s why my hats and kudos go off to Todd Okuhara [crew chief] for finding what was right and wrong and adjusting to it. Yeah, you want to win every race, but this one was very special in a lot of ways.”

Alexander, who raced to his first career final round, started from the No. 10 position and defeated Antron Brown, defending world champion Brittany Force, and points leader Steve Torrence before the final round.

C. Force claimed her second Funny Car victory this season with a pass of 4.046 at 313.73 in her Advance Auto Parts Chevrolet Camaro against Matt Hagan. After earning the No. 1 qualifier on Saturday, Force secured her 10th career victory making her the most victorious female Funny Car driver in the history of NHRA. 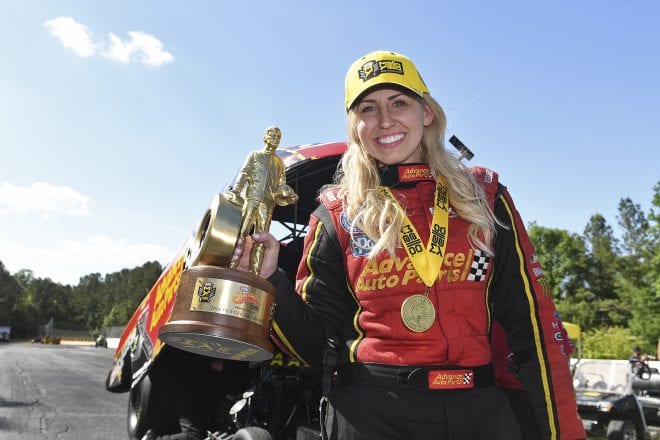 “We had a great race car all day long,” Force said. “Every single guy on my crew has done just a phenomenal job all day long. From getting the No. 1 qualifying spot yesterday in our final qualifying run and to go out there and have some consistent runs. It’s great to be able to get a win at the track my sister [Ashley Force-Hood] got her first win at. It’s a pretty good day and we’re excited.”

In Pro Stock, Vincent Nobile powered his Mountain View Tire Chevrolet Camaro to a victory run of 6.599 at 209.72 to defeat Tanner Gray in his Valvoline Chevrolet Camaro in the final round. This is his first career victory at Atlanta and second Wally of the season.

“I had the car to beat this weekend,” Nobile stated. “I know we didn’t qualify No. 1 but going back after each run and looking at the computer we know we could’ve been the fastest car each session. On race day we got it together and was the fastest car every session. All in all, it was a great day.”

Nobile is now the points leaders for Pro Stock after defeating Alan Prusiensky, Chris McGaha and No. 1 qualifier Greg Anderson prior to the final round.

Defending world champion Eddie Krawiec rode his motorcycle to winner’s circle with a pass of 6.922 at 194.91 on his Screamin’ Eagles Vance & Hines Harley-Davidson. This is his fourth event victory at the NHRA Southern Nationals and 45th of his career. 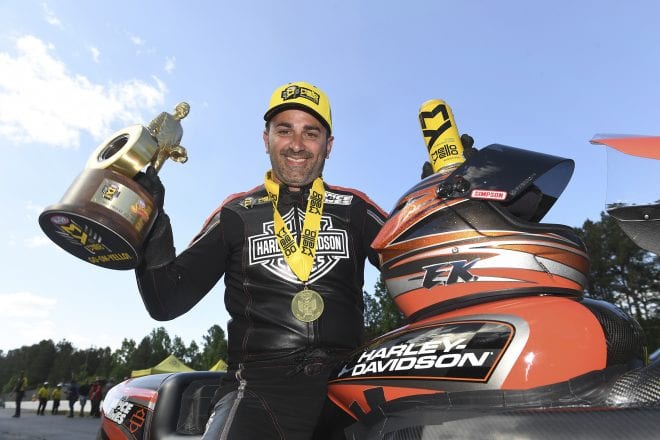 “This track has been very challenging for us this weekend,” Krawiec said. “I really had a better bike than what I showed Friday and Saturday because I was not making the proper chassis adjustments to get the bike down the track. We’re going to learn and continue to get better. That’s what we need to do.”

Krawiec was the No. 5 qualifier and was victorious against Angie Smith, LE Tonglet, the No. 1 qualifier Hector Arana Jr., and Scotty Pollacheck in the final round.