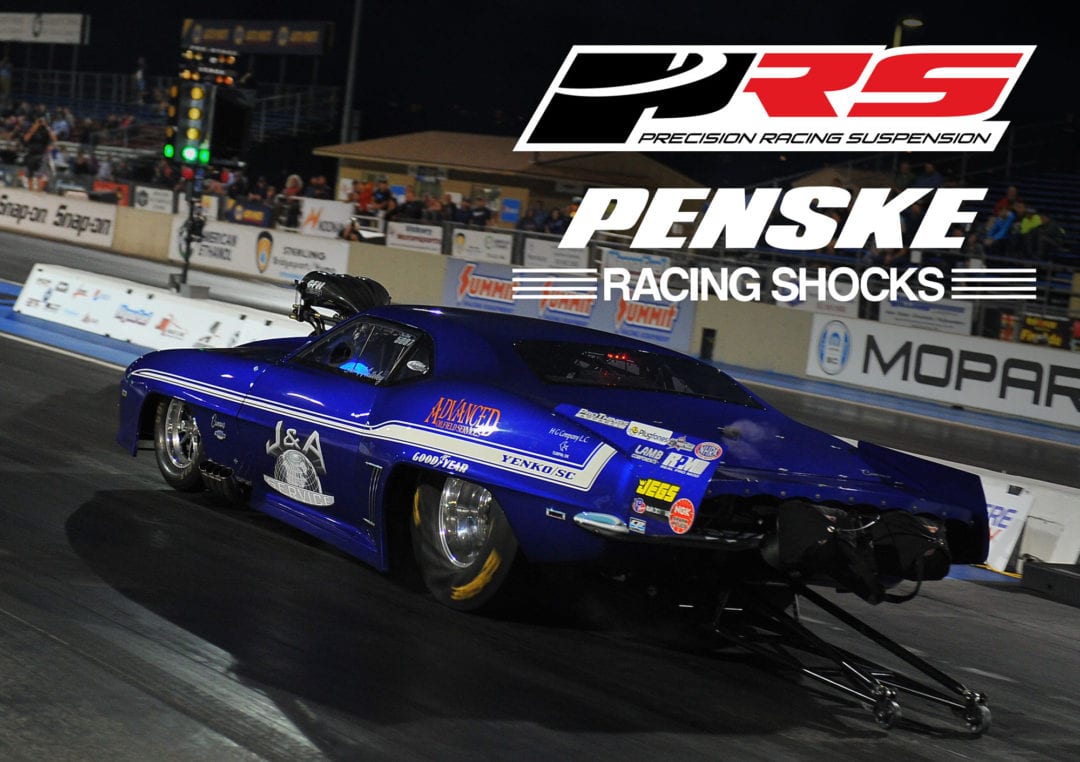 Precision Racing Suspension and Penske Shocks have returned as title sponsors for the DRAG ILLUSTRATED World Series of Pro Mod it was announced today, as one of the most respected names in racing shocks and suspension will again sponsor the test sessions leading up to the event, which takes place Aug. 10-11 at Bandimere Speedway.

The Precision Racing Suspension/Penske Shocks World Series of Pro Mod Private Test will take place Tuesday, Wednesday and Thursday, giving the all-star competitors of the $100,000 winner-take-all race ample opportunity to have their cars ready for the biggest and richest Pro Mod race in the history of the known universe.

“We loved being part of the World Series of Pro Mod last year and we know this year is going to be even better,” Penske Shocks and Precision Racing Suspension’s Adam Lambert said. “It’s a great event. When Wes (Buck, Drag Illustrated Founder and Editorial Director) first told me his plans for the event, I told him we wanted to be part of it. Most of our work is done in testing, so it’s fitting we can help with testing and let the racers compete at their best. It’s the biggest show of the year and you want to make sure you have all your ducks in a row before you try to show out and win $100,000.”

The test session a year ago proved to be a pivotal part of the World Series of Pro Mod delivering a thrilling show on Thunder Mountain, as the talented competitors used the two days to get accustomed to competing at an altitude of nearly 6,000 feet. With a larger and even more talented field in 2018, the Precision Racing Suspension/Penske Shocks World Series of Pro Mod Private Test is now three days, setting the stage for what will be another unbelievable weekend.

“This is what the fans deserve. Fans deserve to see the best Pro Mod racers in the world at their absolute best,” Buck said. “When the World Series of Pro Mod arrives on Thunder Mountain, we want to see them come into Friday and Saturday poised, polished and ready to roll. It’s what the fans and racers deserve, and by giving them time to practice and get everything ready, they’re heading into race day with a full head of steam. We are thankful to our friends at Precision Racing Suspension and Penske Shocks for this private test, ensuring everyone who is entered at the World Series of Pro Mod will be racing on Friday and Saturday with as much momentum as possible.”

Penske Shocks and Precision Racing Suspension will have a noticeable presence at the race, as the companies provide the products of choice for nearly the entire World Series of Pro Mod field. The companies have continued to be an industry force in all of doorslammer racing, providing quality parts and service for standout competitors in Pro Mod, Pro Stock and Top Sportsman.

The scoreboards will be off during the three-day test sessions and during the shakedown runs on Friday, but will be turned on for eliminations on Saturday. When that happens, Lambert predicts it will reveal a number of spectacular passes en route to the $100,000 winner being crowned.

“It’s going to make for a great show,” Lambert said. “The Bandimere family has such a strong following and the fans are unbelievable out there. Once those clocks turn on, it’s going to be absolutely wild and I can’t wait. I wouldn’t be surprised to see a bunch of 5.80s, which at that altitude, is unbelievable. I love all the different classes, but Pro Mod is the most exciting form of racing.”