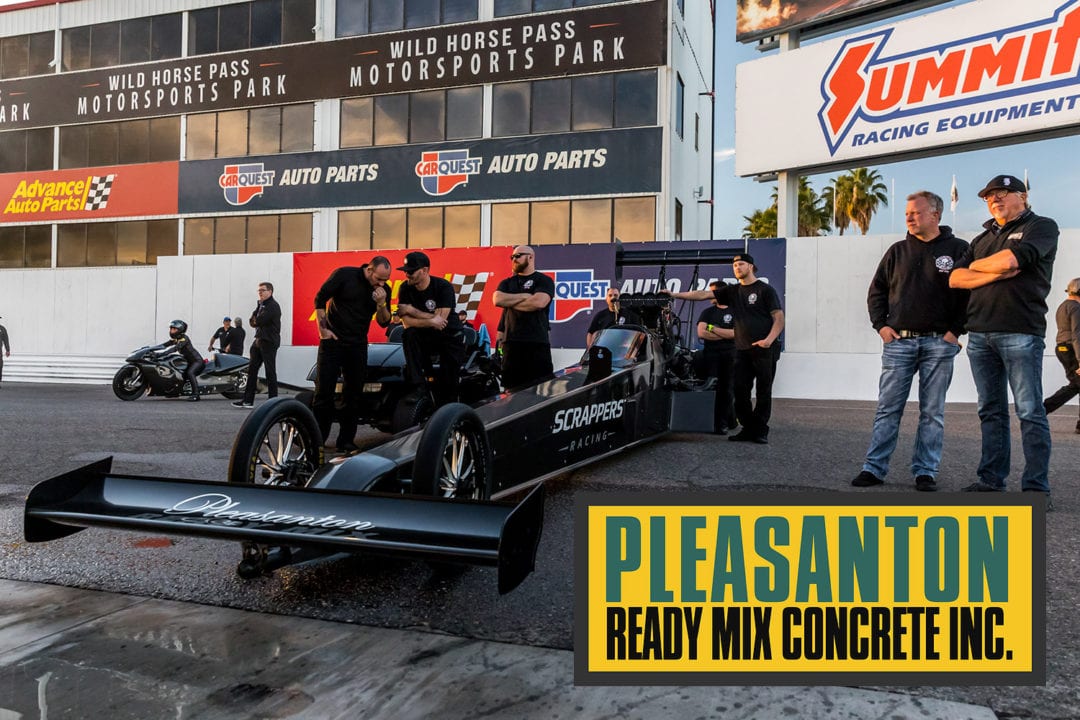 Mike Salinas and his Scrappers Racing team are on the verge of a breakout season in the NHRA’s Top Fuel ranks 2019. One of his first customers will be there to enjoy the ride.

Salinas announced today that Pleasanton Ready Mix Concrete has signed as an associate sponsorship for the 2019 season with Salinas’ Top Fuel team, continuing a steady momentum the team has been building heading into this weekend’s season-opening race, the NHRA Winternationals at Pomona.

Pleasanton Ready Mix was Salinas’ second customer at his business 36 years ago and he has maintained a strong relationship with owner John Santos, who is also a major drag racing fan. With Salinas looking to take the next step as a team in 2019, it was a natural fit for the sponsorship.

“This is really exciting for us to add Pleasanton as a sponsor for 2019. It’s a great family with great people and they love racing,” Salinas said. “They’re going to be able to meet with the top people in their industry at the races to help them and it’s really a perfect opportunity for everyone involved. We’re aggressively going after sponsors and we want to be around like-minded people such as John who want to be a part of this team and be involved in this sport. It’s very exciting to have this come together before the start of the year.”

It’s another big step in the right direction for Salinas and his Scrappers Racing team, which added Brian Husen as tuner and Alan Johnson as tuning advisor in the off-season. Adding a close-knit sponsor is another boost of momentum, while Pleasanton Ready Mix is just as excited with the partnership.

Santos bought the company in 1983 and now has 12 concrete trucks for the successful business based in Pleasanton, Calif., which is less than an hour from San Francisco, Oakland and San Jose. Santos believes working with Salinas and traveling to a number of races will be a great benefit for his company, furthering a relationship that is nearly four decades old.

“I’ve known Mike for 36 years now,” said Santos, who owns Pleasanton Ready Mix along with his son, Rob. “He came through the door of our shop looking to buy scrap metal, back when he was first getting started with his business. I told him I had three old mixer trucks out back that he could have. The first thing he asked was, ‘How much do you want for them?’ I told him he could have them, just to take them, but he was determined to buy them. I wouldn’t let him.”

Nearly forty years later, Salinas hasn’t forgotten that act of kindness, and neither has John Santos.

“We couldn’t be happier for Mike and the world-class team he’s assembled with Scrappers Racing,” Santos added. “We’re excited to go along for the ride with them on the Mello Yello NHRA Drag Racing Series tour. Mike’s a great man, and we’re proud to be associated with him.”