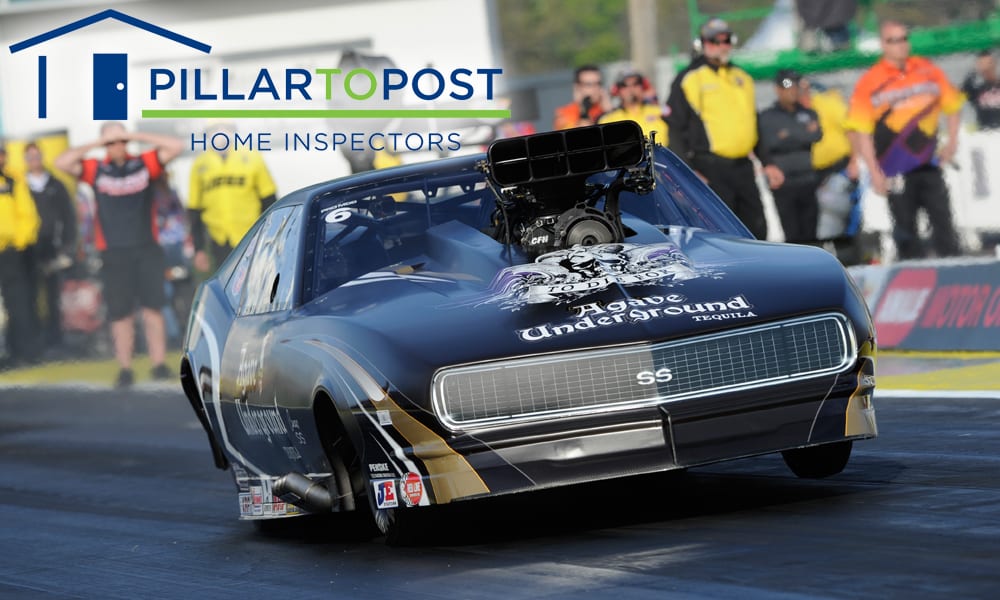 The racing season hasn’t even started and the excitement is reaching a fever pitch amongst the Danny Rowe Racing team, particularly in light of the marketing partnership between Pillar To Post Home Inspectors the team will debut at the upcoming 46th annual Amalie Motor Oil NHRA Gatornationals in Gainesville, Florida.

“We’re always proud to roll into the first race of the season with a new company looking to make a mark in the sport of drag racing, and even more so when it’s with Danny Rowe Racing,” says Danny Rowe, team owner and driver of one of the team’s two supercharged Agave Underground Tequila ’68 Camaro Pro Mods. “I first met Bill and Cody Lewis of Pillar To Post in St. Louis a couple of years ago, and we hit it off right away. To have them join our team with their Pillar To Post Home Inspectors franchise two years later is incredible. We’re excited to get them back out to the drag race, to have some fun and put these hot rods in the winner circle for them and the rest of our great partners.”

Named the leading home inspection company in North America by Entrepreneur Magazines annual franchise rankings, Pillar To Post is active across the United States and Canada and is in more than 400 locations in 8 provinces and 44 states.

“While my son, Cody, and I are located in Northern Minnesota, the reach of Pillar To Post spans nationwide,” says William Lewis. “So we’re very excited to be a part of Danny Rowe Racing and make some noise in all the markets the J&A Services NHRA Pro Mod Drag Racing Series ventures to in 2015.”

Cody Lewis echoed his father’s excitement, adding, “We’ve been fans of Danny Rowe ever since we met him, and it’s a big moment for us to be involved in any way with his race team. We’re also fans of Pro Mod, specifically, and we couldn’t be happier to get involved with a class that is so exciting and has so much momentum right now. We’re very much looking forward to the NHRA Gatornationals and can’t wait to get to know the rest of the Danny Rowe Racing team.”

Danny Rowe and Steve Matusek, drivers of the Agave Underground Tequila Pro Mods, will take to the Auto-Plus Raceway at Gainesville for the 46th annual Amalie Motor Oil NHRA Gatornationals Friday, March 13, 2015 at 12:00PM EST for the opening round of qualifying. The second round of qualifying will begin at 3:00PM EST. QuaDRRlifying will continue on Saturday, March 14, 2015, with a third and final session of qualifying at 2:00PM EST with the opening round of eliminations slated for 5:00PM EST. Final eliminations will continue on Sunday, March 15, 2015 at 12:45PM EST.

Named the leading home inspection company in North America for 2012 by Entrepreneur Magazines annual franchise rankings, Pillar To Post is active across the United States and Canada and is in more than 400 locations in 8 provinces and 44 states. Every one of Pillar To Post’s nearly 700 home inspectors is rigorously trained, both in the classroom and on site, and required to continually upgrade his or her skills to keep current with new technologies and professional standards. Furthermore, all Pillar To Post inspectors must carry Errors and Omissions (E&O) insurance, which protects referring agents from liability.