With over 250 team entries, great crowds and a superbly prepped racetrack, the table was set for three great days of racing action at the German Hockenheimring round four of the FIA European Drag Racing Championship Series.

Already the early qualifying runs on Friday showed how well the “Rico Anthes quarter mile” had been prepared for the 2019 edition of the NitrOlympX. The fans saw plenty of great races in all categories. Top Fuel dragsters were able to run in the 3.8-second zone and no less than four Pro Mod cars ran in the 5-second zone right out of the trailer.

Saturday morning started with rain, which lasted until noon. After the track had been dried only one round of the FIA categories could be run before the persistent rain showers returned and forced the officials to call the remaining race rounds. 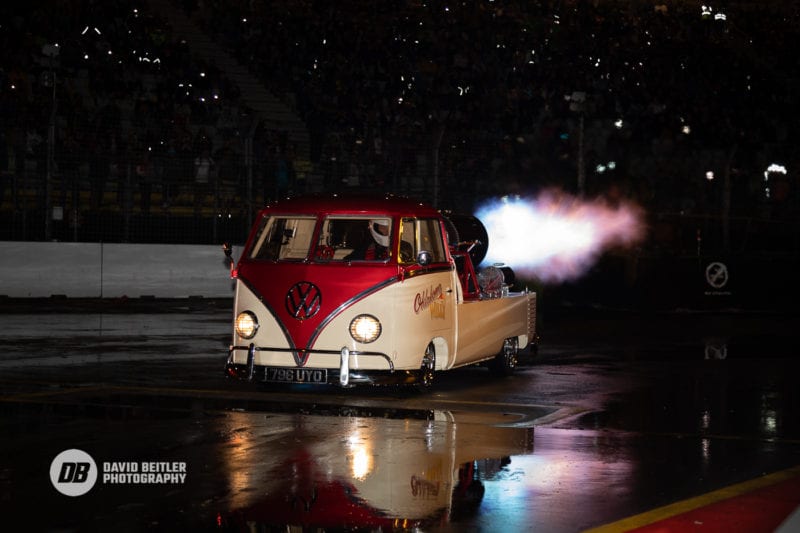 Due to the rain, the program of the famous Nitrolympx Night Show had to be rearranged and shortened. World class stunt driver and record holder Terry Grant thrilled the fans, who sat in the stands through the rain, with an extraordinary drift show and several drivers performed some huge burnouts at the starting line. No less than four jet cars pulled up to the start and performed some fiery “pops” at the line. One of which was Perry Winkles’ one-of-a-kind turbine VW Pick Up called “Oklahoma Willy.” Another highlight was French David Pertué in his turbine-powered “Green Monster” slingshot. Several fuel teams pulled their cars on the track to fire their engines and gave the fans something as a substitute instead of their originally planned flame-throwing runs. A great fireworks show ended the day and started the party night in the Motodrom. All in all, everyone from the officials to the racers to the fans did their best to make the most of the day under the given circumstances.

Weatherwise Sunday was a whole other story as blue skies and sunshine for the most part of the day awaited the racers and fans alike. Great on track action was provided by all car and bike classes. 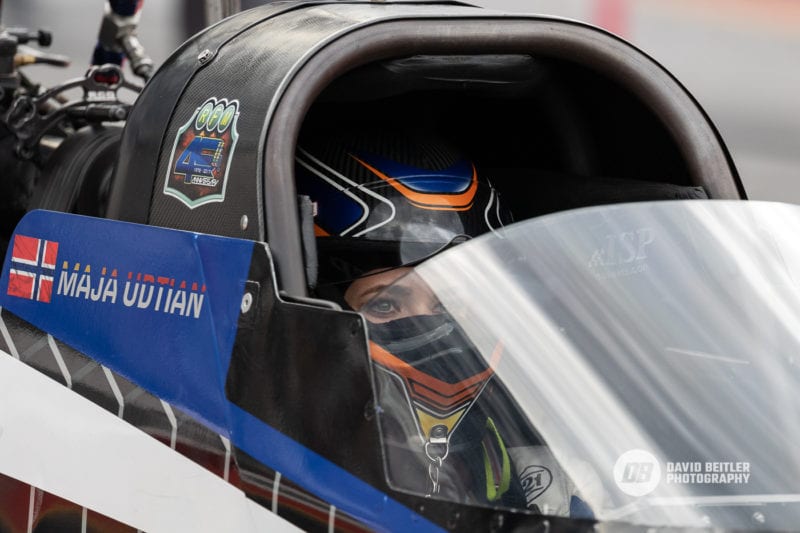 Anita Mäkelä had a bye run in the first round and only needed to break the beams under her own power. But she dropped everybody’s jaws when she kept the throttle down and posted a 3.932 run on the board, which earned her lane choice in the semifinals, where she met Swiss Jndia Erbacher in her Monster Energy Top Fuel dragster. Anita took the win over Jndia with a 3.928 at 295.46 mph to Erbacher’s slower 4.391 at 188.51mph and met Maja Udtian from Norway in another all-female final.

On her very own way to the finals, Maja defeated Urs Erbacher in the first round with a tire-spinning 4.368 at 190.81mph and her RFM teammate Liam Jones in the semifinals with a 3.945 at 278.97 mph, while Jones spun the tires. Maja was given another chance to grab her eagerly awaited first Top Fuel win.

But Anita’s performance didn’t faint and she denied the young Norwegian her first trophy once again by beating her 4.027 at 275.39 mph run with a slightly quicker and faster 3.999 at 282.95 mph run.

Even more impressive were the efforts of Swedish Jimmy Ålund who went to the finals in FIA Pro Stock and in FIA Pro Mod. Ålund defeated Simon Gustafsson in the first round of FIA Pro Stock and had a bye run in the semifinals, which put him next to defending event champion Robin Norén in the final round. Norén with problems during the burnout still staged the car and ran a 6.735 at 204.97 mph, but it wasn’t enough to beat Ålund’s 6.651 at 208.42 mph.

Jimmy then had to rush to get into his “Old ’51” to race No. 1 qualifier Jan Ericsson in the final of Pro Modified. Ericsson actually was quicker, posting another storming 5.887 at 244.16 mph at the board, but since he left too early he handed the win over to Ålund, who recorded a slower 5.957 at 224.70 mph. Ålund is still aiming for the championship crown in both categories this year. The two remaining races of the European schedule will show if he’ll be able to achieve his ambitious goal.

The small Top Methanol field was filled with upsets when No. 1 qualifier Johnny Lagg went out in round number one against bump spot qualifier Jürgen Nagel on a holeshot. Nagel even went on to an all-German final against Timo Habermann after his bye run in the semis. Habermann, who had to race his brother Dennis in the first round and went on to beat current points leader Sandro Bellio in the semis, continued to run strong in the finals, posting a 5.406 at 264.90 mph. Timo already had won before he even finished his run, because Nagel showed some nerves and pulled a red light at the tree.

Other winners in their respective categories include: 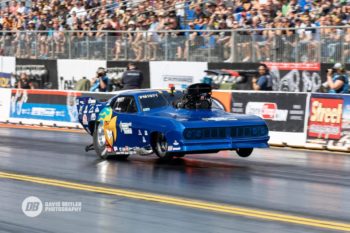