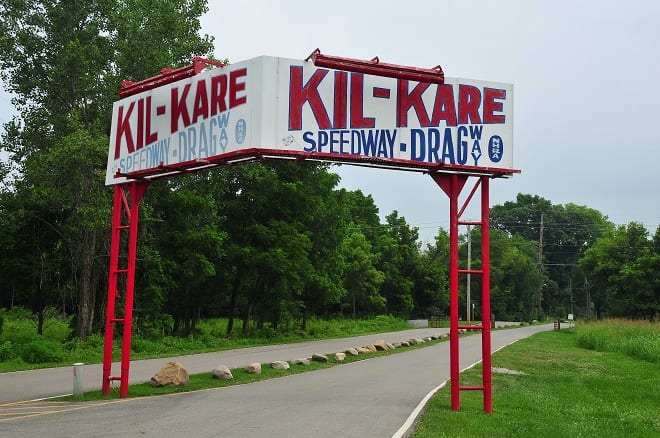 If there’s just one message that Kil-Kare Dragway would like to shout from the roof tops these days, it would be the simple announcement: “We Are Open!”

Years ago it wouldn’t ever have been in question, as Kil-Kare was the happening place to be if you lived in Xenia, Ohio, or the surrounding Dayton area. The turning point came when longtime track owner Dick Chrysler fell ill and eventually passed away in March 2011, following the death of his wife, Barbara, 10 years earlier. Following Dick’s illness, the fabled drag strip built in 1959 became in real danger of shutting down.

“There was a power struggle going on within the family as to who owned the drag strip and it was a chaotic situation for awhile,” recalls William Tharpe, who in 2014 took over as Kil-Kare’s general manager.

Tharpe’s story is a classic tale of a wide-eyed youngster who grew up at his local strip and eventually was promoted to running the place. Of course, you’d expect anyone to have to pay their dues before being promoted to such a position, but in the case of Will Tharpe, the poor kid even had to pay a gate fee for a year and a half after landing his first job at the track!

As a youngster Tharpe was hired to do odd jobs and even had a great talent for announcing the race under the tutelage of the regular track announcer. Trouble was, Barb Chrysler didn’t realize Will was in her employment! “Week after week I’d have to sit in line with cars backed all the way to the road and when I’d get up to the gate and try to explain to Barb who I was, she’d just look at me suspiciously and say, ‘I know everybody that works for me; and YOU don’t work for me!’” laughs Will, as he recalls his admission-paying “on-the-job training.” Despite Barb running a tight ship, he says Kil-Kare was a fun place to be as a kid.

It most certainly was a money-making machine that truly had some great years of operation, but after the passing of both Chryslers, it truly went into a downward spiral that almost plummeted all the way to the ground. Pretty soon, loyal Kil-Kare racers even started packing push mowers in their trailers just so they could mow a place in the pits to park! Thankfully, the story of Kil-Kare Dragway took a major turn upward when local businessman David Coterel took an interest in the track, purchasing it in 2011, along with many acres of surrounding land. The acquisition was much more significant than simply renovating an aging drag strip.

“Honestly, I don’t know if this track would even be open right now if David hadn’t bought it,” Tharpe says. Just like Will, Coterel also grew up in southwest Ohio and he and Tharpe both remember watching veterans like Don Garlits, Bob Glidden, Pat Dakin, Chris Karamesines, Billy Stepp, “Ohio George” Montgomery and many others race at their local drag strip. But while they both share great memories of decades past, David and Will aren’t content to just sit around and talk about the good ol’ days. Instead, they’re steadfast on channeling the same magic of yesteryear, while taking the track to places it’s never been before.

You can imagine what a three-million-dollar renovation looks like, which is exactly what Kil-Kare received after Coterel bought the track. And don’t let the vintage iron sign at the north gate fool you; it was only left it in place for a touch of nostalgia! The track remains a work in progress, though, and Tharpe says there’s so much more they want to do. “We’ve never even got around to replacing the old tower for example; we figured we had so much more important things to do first.”

Still, things like guard walls, track surface and timing system are all in superb condition after the renovation. Additionally, David and Will are always thinking outside the box when it comes to their entertainment offering, especially during the harsh Ohio winters. “We’re always discussing how we could develop the surrounding land and what kind of revenue streams we could create during the winter to get us through the off season,” Tharpe says.

Everything from horse-and-buggy rides to a massive drive-through Christmas light display routinely gets discussed at Kil-Kare as possible wintertime attractions.

As far as thinking outside the box goes, Tharpe described for me the “pizza shack” they’re currently building in the pits. “It’s going to be a pizza delivery service that caters to the racers in the pits during events,” he beams.
Imagine this: in the very near future at Kil-Kare Dragway you’ll be able to grab your cell phone, call up the pizza shack and say, “Hello, I’m parked on pad number 75 and I’d like to order a large pepperoni with extra cheese, please.” Minutes later, an antique car-bodied golf cart with a flashing sign on its roof will be dispatched from the pizza shack to deliver a hot pie right to your pit. Ingenious, I say!

Indeed, it’s clear the racers are the star attraction at Kil-Kare and customer service is the first order of business. “The only thing we cut is checks to the winner!” Tharpe declares, touting his iron-clad guarantee to never cut the purse.

At the end of the day, at Kil-Kare Dragway it’s all about entertainment and customer service—and soon, pizza—definitely pizza! Well played, Kil-Kare! I’ll be back soon for a large supreme!