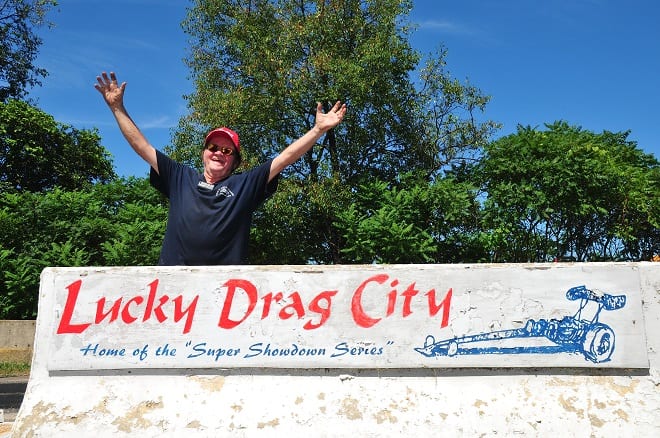 If ever a man could say he’s led an extraordinary life, that man could easily be Maurice “Lucky” Foley, owner of Lucky Drag City, just outside Erie, Pennsylvania. His notable life experiences range from Air Force veteran to race track owner, to active Elvis impersonator—as well as a few other gigs you’d surely find fascinating.

Still youthful at 77 years of age, “Lucky” (as he’s known to everyone) sports a full head of thick black hair and long sideburns—which is important if you’re going to impersonate “The King.” Each winter he and his wife, Dolly, (also an entertainer) travel to Florida where Lucky is employed by Carnival Cruise Lines as possibly the oldest Elvis impersonator in the world! But when he slips into his white, sequined jumpsuit and starts bellowing “Blue Suede Shoes” into an oversized mic on the stage of a cruise ship, people dance and women swoon. “Elvis was just the coolest guy ever,” Lucky says.

As we stood beside the concession stand of Lucky Drag City my mind was racing with questions for Lucky, but my first was simply, “What’s your favorite Elvis song?” He immediately began singing “My Way,” followed by a couple lines of “All Shook Up.” It was impressive stuff! “I would have worn my full costume if I had known you were going to stop by today,” he tells me with a booming laugh. Concession stand worker Sandy Nelson appeared equally impressed, though she’s heard Lucky sing many times before. “I’m not sure which is better, his singing or his driving skills,” she says.

That’s right. Lucky is also a drag racer and enjoys competing in the bracket races each weekend at the track he’s owned for more than 40 years. When Lucky first bought the track it was a skinny little strip, no more than 20 feet across. He eventually widened it to 40 feet and doubled the amount of staging lanes from two to four. They still race on the full quarter mile during Saturday’s test-and-tune sessions, but Sunday’s bracket events are held on the eighth mile.

Lucky first laid eyes on the folksy little property shortly after the track was built in 1955. Originally named “Presque Isle Timing Association,” the vintage facility was home to some of drag racing’s earliest pioneers in the Northeast.

“It had to have been around 1962-1963,” Lucky says, recalling the fondest story he can think of about the track, several years before he even bought it. He tells me that Super Stock and FX pioneer Dave Strickler showed up one day and brought Grumpy Jenkins with him and it just so happened that another racer, a kid out of New York named Jim Oddy, was also there.

“Geez, Jimmy must have been like 20 years old when this happened,” Lucky says. When Super Street was called to the lanes, Strickler and Oddy happened to be paired up. “Best I can remember, Strickler was driving something like a 1962 Chevy Biscayne and Oddy had a 1936 Chevy coupe.” According to legend—and Lucky’s strong memory—a baby-faced Oddy outran Strickler and Grumpy, but after returning to the pits Strickler wanted to run again for double or nothing and Oddy accepted the challenge.

“Dave and Grumpy changed tires; they took off the nine-inch slicks that were on the car and put on a pair of 11.5-inch slicks, which was the biggest you could get back then. They ran the rematch and this time Strickler took the win by the slightest of margins. I’m talking about a matter of a couple of inches,” Lucky happily remembers. Oddy put the car up for sale a short time after that—and it was none other than Lucky Foley who was first in line to buy it!

“I traveled from my home in Erie, Pennsylvania to Jimmy’s mother’s house in West Seneca, New York. Oddy had a bunch of engine parts laying all over his mother’s basement, had them laid out on newspapers. I loaded the parts into my trunk and hauled the car home with a tow bar,” laughs Lucky. Meanwhile, Oddy became quite famous as a performance guru while racing for many years on national circuits before eventually settling in North Carolina, where he now fields an entertaining A/Gasser driven by Jr. Ward. As for Lucky Foley, he raced Oddy’s old Chevy for several seasons and many, many other cars in the years to follow.

Lucky’s chance to buy Presque Isle Timing Association came in 1973 when gasoline prices soared to 50 cents per gallon, which caused the former track owner to believe drag racing was doomed as a sport. “He couldn’t imagine that people would still drag race with gas prices so incredibly high, so he closed the track and tore down every building,” Lucky says.

It just so happened, though, that Lucky owned a few apartments and a barber shop and also had some cash on hand, so after examining his resources he was able to buy the track in 1974 and immediately renamed it “Lowville Drag Raceway,” referencing the community where it’s located. “Years later I thought to myself, ‘Who in the world wants to be in a place called Lowville?’ so sometime around 2000 I changed the name to Lucky Drag City,” he chuckles.

Even as he approaches his 78th birthday, Lucky shows no signs of slowing down. “The trick is to stay active,” he insists. “And stay away from sugar, grease and salt!” He must know something ’cause ol’ Lucky can still fit into his costume far better than Presley himself could back in 1968 during his “Comeback Special” tour.

Soon enough, Lucky will close the track for the season and head south toward Florida and board a cruise ship, where he’ll shake and gyrate and sing Elvis songs. And all this time I thought I had a pretty good gig! Lucky, you sir, ain’t nothin’ but a hound dog!