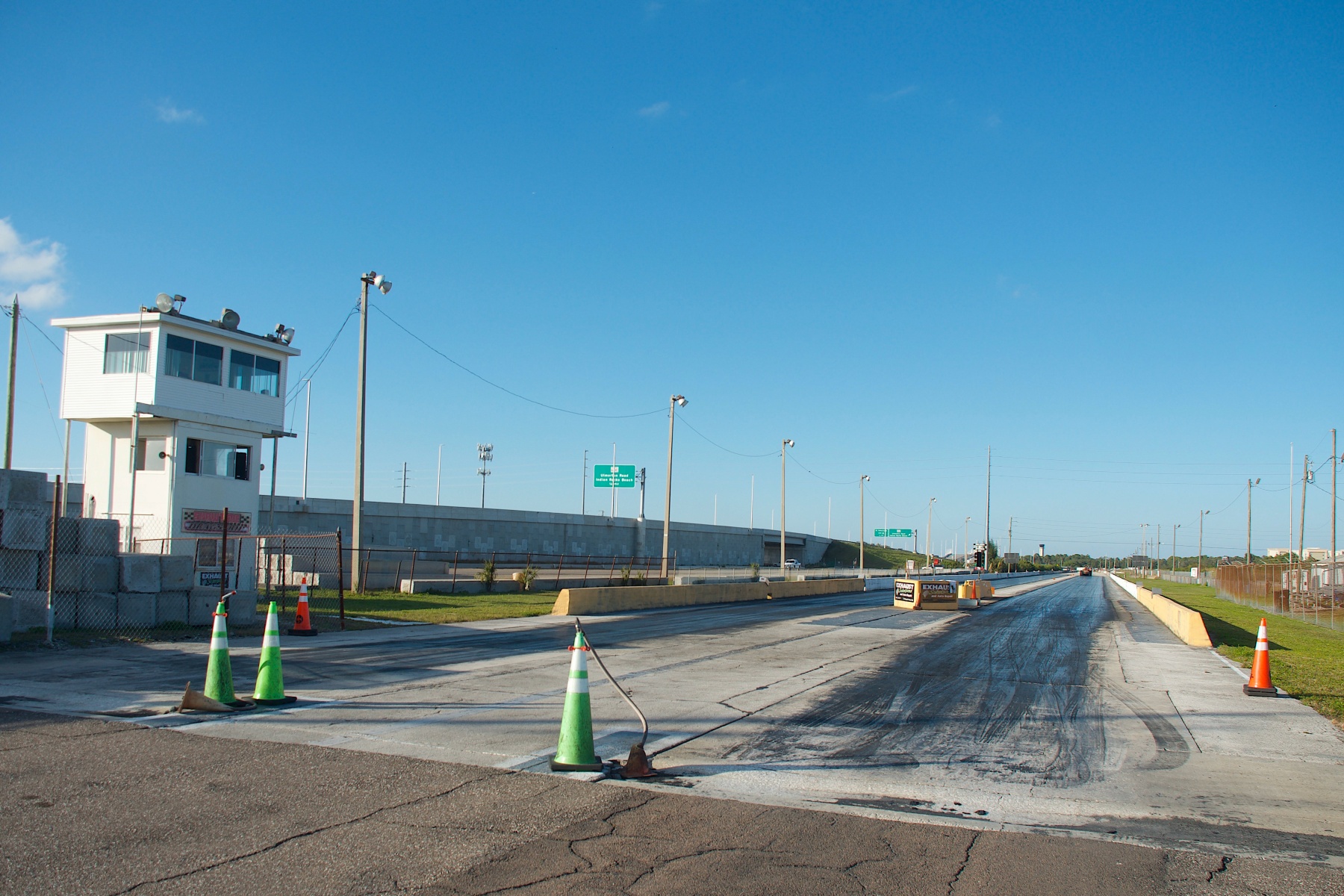 The state of Florida has played an important role in drag racing history over the years and it has seen its fair share of tracks come and go. While researching Florida’s dragstrip history I uncovered no less than 62 different tracks dating back to 1950 that have been in operation in the Sunshine State. While many are long gone, Showtime Dragstrip in Clearwater is among the oldest still in operation, with a build date of 1960, and originally called Sunshine Drag Strip.

An important milestone happened here in 1966, when Emery Cook when scorched the strip in Don Garlits’ radical Dodge Dart, recording the first-ever 200 mph Funny Car run. The car was an early representation of the class with a near-18-foot roadster-type body, mounted on an altered wheelbase. It was also outlawed by NHRA shortly after recording the historic run at Sunshine. The car was promptly retired from drag racing and went into storage for 17 years. No surprise, it eventually wound up at Garlits’ Museum of Drag Racing in Ocala.

In January, I sat down with Don to hear some of his favorite memories about the track he simply refers to as “Sunshine.” After giving me a play-by-play of the historic Funny Car run in 1966, he walked me over to his file cabinet and showed me the original news articles that detailed the incredible 200 mph run recorded 56 years ago. A little while later I walked into the museum and looked at the actual car…and yes, it gave me chills!

In 1970, Garlits suffered his horrific explosion at Lions Dragway in California, which famously cut off the front half of his right foot. While still in the hospital, Garlits went right to work redesigning the slingshot dragster, and sketched some of the earliest rear-engine dragster examples from his hospital bed. Later that same year, a revolutionary new design rolled out of Garlits’ shop, with Sunshine Drag Strip once again playing another role in history.

“In the fall of 1970 after we completed that new design, we first took it to Tampa Dragway just to start it, but when it was time to make some runs with it we took it to Sunshine,” Garlits says. “A lot of cars in that day – including many of my own – made their first runs there, and I matched raced everybody from Art Malone to Dick LaHaie at Sunshine.”

Another memory he shared was the time Billy Herndon bought the infamous twin-engine dragster from Tommy Ivo and he went to Sunshine to make a run with it. “Well, he didn’t get the parachute out and he went right across the highway and hit a pine tree in the field across the road,” Garlits remembers. “It’s a wonder he didn’t get killed!”

I sat with “Big Daddy” in his office for several hours and listened to one story after another about memorable things that went down at Sunshine, and I remember thinking how cool it is that this amazing track located right in the middle of Clearwater is still open, and you can show up with your daily driver and make a pass down the same track where the first 200 mph Funny Car run took place!

Oh sure, a lot has changed, including the name to Showtime Dragstrip, after the track was purchased by Robert Yoho almost a decade ago. Track manager Jeff Miller tells me he lovingly refers to the place as a “working man’s track.”

Currently, the facility sits on state-owned property, but Yoho would like to purchase the track outright after the nearby freeway construction is complete.

“If we’re able to buy this property we’d like to do a variety of things, which may even include moving the starting line back and returning the track to a quarter mile,” says Miller.

There’s a lot of possibilities that are constantly being discussed as they patiently wait until the opportunity to purchase the property is a reality. In addition to a robust Wednesday night TNT program, Showtime offers Street Wars on the third Saturday of every month.

“Three Saturdays a month we hold races on the neighboring oval track and also sprinkle in some small-tire races at the dragstrip,” says Miller.

“Ryan bought a pair of 2020 Mustangs and they’re available to rent for things like corporate outings, birthday parties, etc. We’ve had groups as small as 2-4 people and as large as 24…and man, you should hear the smack talk when they start racing each other in those Mustangs!” laughs Miller.

There’s another local who frequents the track with his Tesla, and can outrun many of the cars that get trailered in. I personally witnessed him stop the eighth-mile timers at 6.08 at 119 mph, but the locals tell me he’s gone 5.99 in the car.

So, whether you want to relive the glory days of yesteryear or experience the modern age, historic Showtime Dragstrip is still very much open for business, and ready for you to come make some memories.