Every year since the inaugural DI 30 Under 30 list in 2015, we identify numerous young racers who are just on the cusp of qualifying for the 30 Under 30 list. These are individuals who are very much on our radar and worthy of a spot on the list, but they just didn’t make the list this year. Whether they’re still very young even on the under-30 scale or they’re one big move away from busting onto the list, we still believe the five young people below deserve recognition for their efforts. This won’t be the last time they appear on the pages of this magazine.

Ahead of the 2020 season of NHRA’s Camping World Drag Racing Series, Mason McGaha was looking towards what should have been the best year of his life. He was preparing to make his debut just a few months after his 18th birthday, but McGaha’s plans were abruptly put on hold due to the COVID-19 crisis.

In July, McGaha finally sidled into position as the youngest competitor in Pro Stock as NHRA made its cautious return to action at the first of four events at Lucas Oil Raceway at Indianapolis in an oddball season.

“I was just trying to make runs and do what I could. I wasn’t expecting too much,” he says. “I was still pretty fresh at what I was doing, and it was a lot harder than a Jr. Dragster or the bracket car – the only cars I’d ever driven before then. It was, ‘do what you can, and we’ll see how it goes.”

Appearing alongside father and fellow competitor Chris McGaha under the Harlow Sammons Racing banner, the younger McGaha began to find his groove piloting a bold blue Chevrolet Camaro and making the field in his third attempt. At Indy’s historic U.S. Nationals, McGaha nearly achieved immortal status as he raced all the way to the semifinals in his first raceday start.

After eight events in his rookie season, McGaha came into 2021 with seat time and an optimistic disposition. It was plain to see he was not to be taken lightly as he powered to two consecutive trips to the third round, became a regular top-half qualifier, established himself as one of the best leavers in the class, and reached his first final round.

It was Topeka, though, where McGaha earned his chops next to veteran racer Bruno Massel in a shocking round-one burndown. Their Chevrolet Camaro Pro Stockers remained idle long after both drivers pre-staged, creating a roar in the stands and across the internet as the starter implored them to move ahead and begin their match.

“It was quite the experience,” says McGaha. “As a little kid, I would watch drag racing highlights and staging duels on YouTube. You don’t want to go up there and intentionally make that happen, but it looked like it would be kind of cool.”

The starting line showdown with Massel lasted an astounding three-plus minutes, and ultimately, both opponents were disqualified for disobeying the starter’s order to stage.

“About 20 seconds into it, I was like, this is definitely happening. It’s crazy it went on for so long,” says McGaha. “Afterwards, I was just trying to process it all. I was like, ‘wow, I really got thrown out for that.’ But it was pretty cool. Everybody is going to remember the burndown in Topeka, whether or not they remember anything else from that race.” – KELLY WADE

It’s not often you see Bobby Bode without a smile on his face and it’s not hard to see why. He made his Funny Car debut at 18 years old, mixing nitro racing with living the college life at Arizona State. It’s safe to say he’s the only Sun Devil business major dabbling with 11,000-horsepower Funny Cars, and Bode, the son of veteran driver Bob Bode, has made the most of it.

He was licensed in St. Louis last year, made his debut — and qualified for eliminations — in Houston last October and won his first round of racing earlier this season, knocking off Terry Haddock in St. Louis.

There’s a long way to go, but Bode has shown immense potential, stacking up a number of Jr. Dragster wins. He’s also licensed in Super Comp and drove a Top Alcohol Funny Car at the Frank Hawley Drag Racing School, but the dream was always to go more than 300 mph.

He done that and then some throughout the 11 starts in his extremely young Funny Car career, going 3.891 at 322.04 to qualifying third in St. Louis this year.

That marked a huge step forward for Bode, who also qualified ninth at the U.S. Nationals this year and 11th in Las Vegas, which were additional highlights in the nine races he attended during the 2021 NHRA campaign. The mix of college and nitro isn’t a conventional one, but this has always been the young Bode’s dream and he’s just getting started.

“I’ve been working my whole life to get to this point,” Bode said earlier in the season. “My mom and dad have been a great support system for me, and I wouldn’t be here without them. I just always had a need for speed growing up, and it’s just incredible.” – JOSH HACHAT

Like so many other second-generation racers, Kelly Kundratic has been around the sport for most of her life. She grew up racing up and down the East Coast with her father, longtime sportsman racer and Lucas Oil distributor Jeff Kundratic, mainly racing the family’s JKR Racing Products Monte Carlo in Super Street.

This year, the 28-year-old started making major steps towards her next goal, competing in NHRA Top Alcohol Dragster. She teamed up with driver and car owner Marina Anderson, a 2018 30 Under 30 honoree, to serve as a crew member on Anderson’s A/Fuel dragster at a handful of races this season to earn the chance to license in her car.

Kundratic, who serves as the Team Pennsylvania Foundation’s director of agriculture policy and programs, took advantage of the opportunity to work remotely this year, traveling from her home base on the East Coast to Anderson’s races in the Midwest. Once at the races, she’d handle right-side engine maintenance, changing the oil, cleaning, pulling spark plug wires and other tasks. She started the licensing process at the end of the year, but cool, rainy weather prevented the team from completing Kundratic’s licensing requirements.

“Kelly has impressed me immensely throughout the year, especially due to her work ethic, her drive, her positive attitude and her willingness to learn,” Anderson says. “I know Kelly is a great role model for the next generation because in addition to all the good things above she’s just an extremely authentic and great person.”

After licensing next spring, Kundratic and Anderson plan to run around five races between national and regional events. Kundratic will also continue racing in Super Street. – NATE VAN WAGNEN

There’s a certain level of expectations that come with racing under the Team JEGS umbrella. Makenna Brown, granddaughter of JEGS Automotive founder Jeg Coughlin Sr., has lived up to those expectations since she started racing Jr. Dragsters at age 10. She won her first race out and continued to succeed in the half-scale cars, winning track championships in 2011 and 2012.

Brown, 21, eventually moved up to one of the JEGS Super Comp dragsters, which she races in big-money bracket races and NHRA events. In just over a year, she’s racked up a number of late-round finishes, including a $5K win this year.

During the week, Brown works at JEGS in the order entry sales program and attends Rollins University, where she’s a senior studying business management. She hopes to move up to the marketing department at JEGS, while she also plans to continue racing and using her platform to inspire other young women in the sport. – NATE VAN WAGNEN 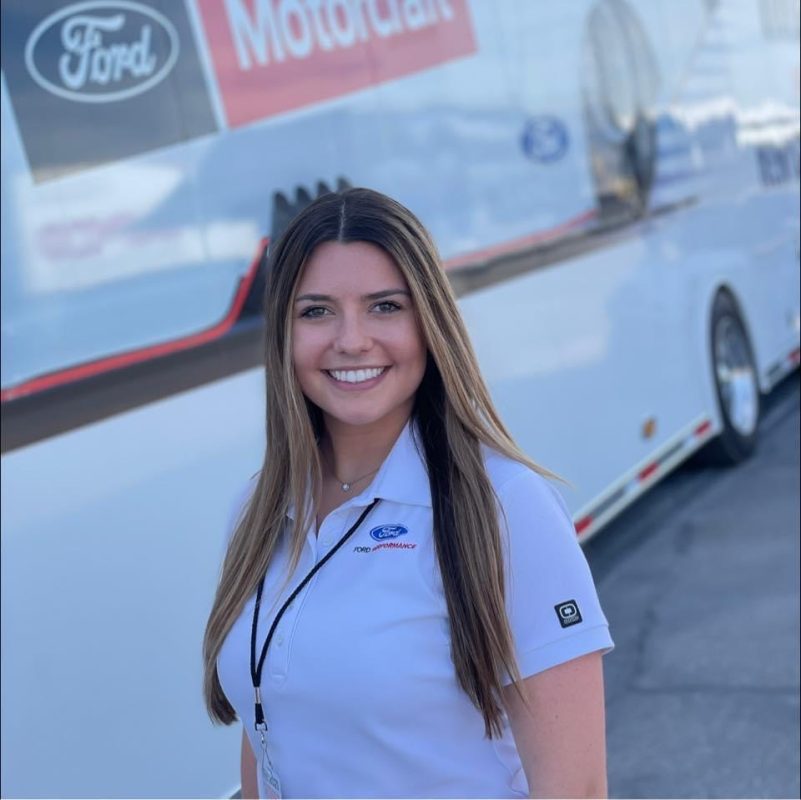 Some young racers are perfectly content treating drag racing as a hobby, whether it’s as a weekend warrior or a high-level touring driver. But Autumn Schwalbe decided early on she wanted to make drag racing her career, too.

Schwalbe went to school for a marketing degree in automotive aftermarket management. As a Ford Mustang racer since before she had her driver’s license, she landed a dream internship at Ford Performance in the motorsports space. That internship led to a full-time position at Ford Performance, where she serves as a global marketing specialist. That position includes traveling to events like NHRA national events, where she’s the marketing manager for Ford’s all-electric Cobra Jet Mustang.

“I love to educate and speak with everyone at the track about how Ford is leading the electric performance area,” says Schwalbe, 23, who races her Coyote-swapped ’89 Mustang LX in NMRA Mod Muscle with support from brands like WELD Wheels and Whipple Superchargers. – NATE VAN WAGNEN