Although the outcome of the championship points competition is no longer in doubt, there will be plenty of excitement this Friday and Saturday, Sept. 19-20, at Osage Casino Tulsa Raceway Park for the Nitro Nationals. 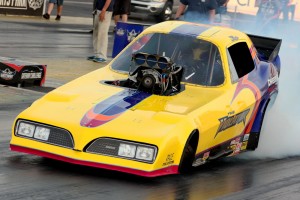 Shawn Bowen from Grand Blanc, MI, clinched the Hedman Husler Hedders DragRacingOnline.com AA/FC Challenge championship at the previous event in Martin, Michigan. It was the second-straight series championship for the driver of the “Violator” Pontiac Firebird.

That seems to be the norm for the six-year-old series as Paul Romine from Indianapolis was champion for the first two seasons, followed by John Hale for two, and now Bowen for the last two years.

There will be something old and something new at Tulsa. In addition to Bowen and the series regulars, John Hale will return in his Phil Burkhart tribute Camaro. The Dallas area racer has spent most of this season running in the IHRA Nitro Jam circuit, with frustrating results. He is sure to have something to prove this weekend.

Making its debut at Tulsa will be a new Ford EXP-bodied “Blue Max” for Texan Ronny Young (top photo). The car is a tribute to the legendary drag racer Raymond Beadle.

There will be two qualifying rounds for the Hedman Husler Hedders DRO AA/FC Challenge on Friday evening with elimination rounds on Saturday evening. For more information go to www.tulsaracewaypark.com.