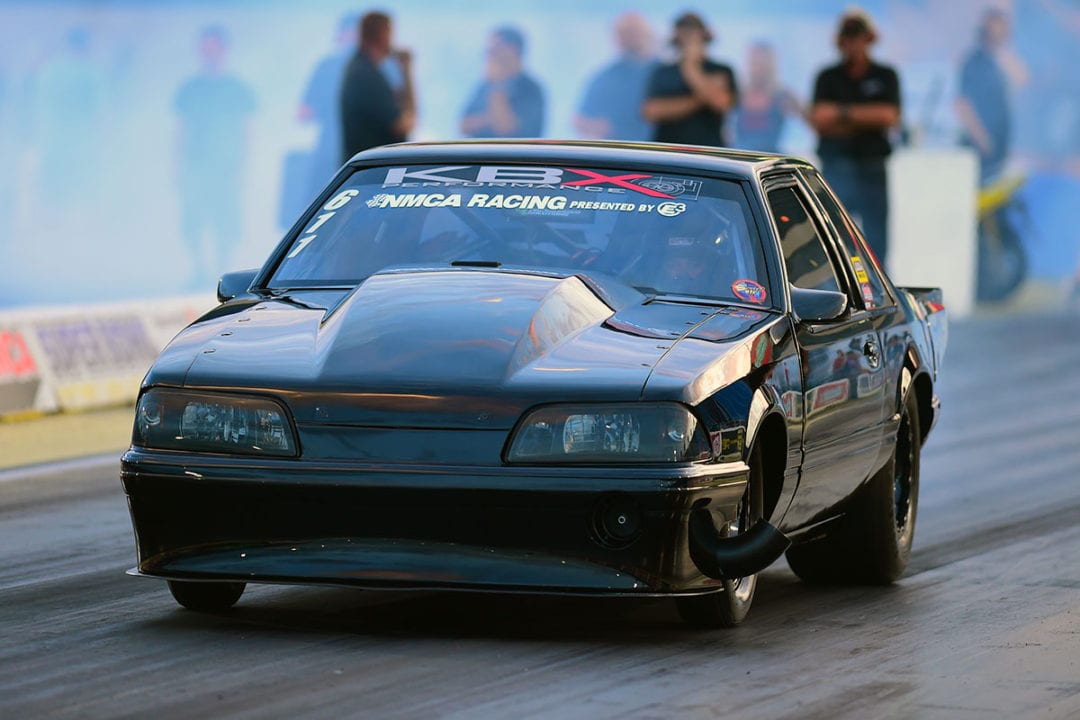 Arguably the most exciting event of the year, the NMRA vs NMCA race held at Route 66 Raceway in Joliet, Illinois, always adds an extra element of excitement as the two series battle head-to-head to capture coveted, exclusive Nitto Tire Diamond Tree Rings. The 14th Annual Nitto Tire NMRA/NMCA Super Bowl of Street legal Drag Racing presented by FST Carburetors kicked off with a perfect forecast and conditions ideal for record-setting runs, new personal bests, and well-deserved wins. As the action on track heated up, so did the car show and QA1 True Street cruise which took participants onto the NASCAR oval at Route 66 Raceway/Chicagoland Speedway for a truly unique experience. After several days of truly memorable action, it all came down to the Bob Curran Memorial Super Bowl Shootouts where the winners from each series’ class faced off against one another. It came down to the final matchup, but team NMRA came out on top once again (for the tenth time in history) and everyone involved celebrated in the Aerospace Components Winner’s Circle.

While Domenic DiDonato was the quickest of the VP Racing Fuels/Mickey Thompson Street Outlaw class in qualifying with a 4.467 at 163.57mph run from his boosted ’08 GT500, the final elimination round belonged to Shane Fisher and Shawn Pevlor who had qualified third and fifth, respectively. Both men were contesting the race with Mustangs, and both had nearly identical 0.06X-second reaction times, but team nitrous Pevlor spun and team turbo Fisher reeled in the victory, capping off the race with a 4.454 at 158.89mph winning time slip he could proudly bring back to his home in DeWitt, Arkansas.

The NMRA Edelbrock Renegade/NMCA Edelbrock Xtreme Street combination class finished with two Chevy Camaros in the finals, and while they weren’t Fords, both Mike Thompson and Paul Smith put in impressive performances. Thompson, who calls Oswego, New York, his home and qualified second on a 4.715 at 149.15 mph trip, clicked off a 4.728 at 150.20 mph pass in his nitrous-huffing and TNT Performance Auto-backed ’80 Camaro to take the win at his first NMCA race ever while Smith, who qualified tenth, went 4.839 at 143.70 mph.

A fast field in ProCharger Modified Street culminated with the top two qualifiers, Brad Schehr and Martin Connelley, respectively, facing off in the all-ProCharged and all-Fox body finals. There, Florida-based racer Schehr pushed his ProCharged Fox-body Mustang to a winning 7.939 at 174.98mph pass over Connelley’s effort, validating the time and money spent recently refreshing his Trick Flow-headed CRE Performance engine and ATF trans. In addition to his win, Schehr also took home a new personal best of 7.703 at 177.18 mph over the weekend.

In Advanced Fuel Dynamics Limited Street, Samantha Moore of Brighton, Michigan, pushed her ’14 Mustang to an 8.852 at 153.61mph qualifying run to settle in fourth while Sondra Leslie was just ahead in third. Later in eliminations, the two ladies met for an all-female final round, and although Leslie left the line ahead, it was Moore who crossed the stripe first going 8.878 at 152.83 mph to solidify her first-ever win in the class and enjoy celebrating the memorable occasion in the Aerospace Components Winner’s Circle.

Taking the number-one spot in Richmond Gear Factory Stock qualifying once again was Mike Bowen with a 10.413 at 127.84 mph run, but the overall glory went to Steve Higgins of Valparaiso, Indiana. Higgins qualified fourth, then worked his way up to the finals where his ’89 Mustang’s 10.541 at 126.58mph pass was a winning one when coupled with his advantageous 0.077-second reaction time even though Bowen was quicker overall. 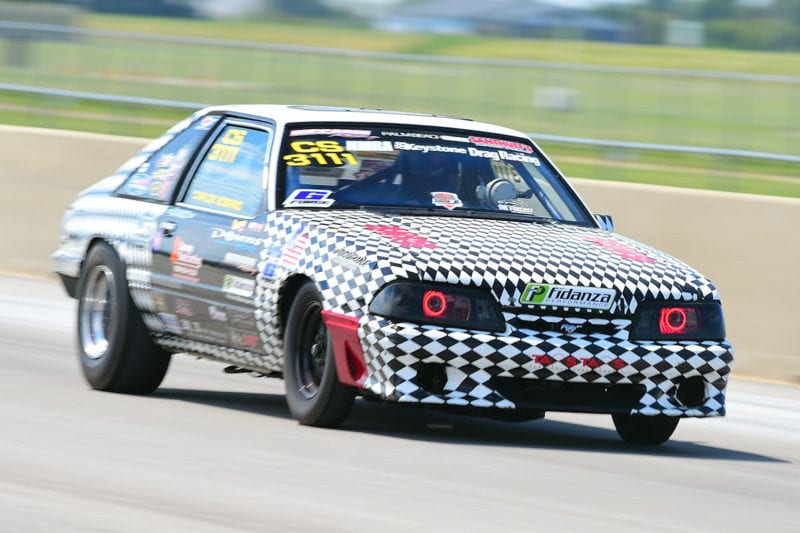 In the insane asylum otherwise known as G-Force Racing Transmissions Coyote Stock, Frank Paultanis topped the qualifying sheet when he ran a 10.200 at 130.30mph pass in his ’04 Mustang. Straight out of New Jersey, though, was Carlos Sobrino and his “Joker” ’88 Mustang sitting in third, and the two men shut the door on their opponents all through eliminations until they met in the finals. There, it was the Sobrino show as his 10.247 at 130.99mph run was unstoppable and secured Sobrino his second win in as many races, marking the Godfather of Coyote Stock’s recent comeback as truly impressive. Even more incredible, Sobrino was the one to clinch the Super Bowl-winning victory in the very last round over Haley Burkhammer of NMCA’s Chevrolet Performance Stock and earned the Nitto Tire Diamond Tree rings for Team NMRA.

What started as an unexpectedly exciting weekend for Georgia boy Charlie McCulloch ended with reason to celebrate. Running without a trans cooler on his MV Performance-backed ’04 Mustang Cobra, because reasons, McCulloch’s 0.023-second light in Exedy Racing Clutch Modular Muscle put him in thirteenth for the start of the elimination rounds. Fresh off his win at the previous race, “The Professor” was on point through all five match ups and closed out the event with an impressive second win in a row, defeating Donnie Bowles in the process thanks to his 10.843 at 122.99 mph pass on a 10.84 dial in.

Making moves in ROUSH Performance Super Stang qualifying, Miles Wagoner had the quickest reaction time of all, but Dennis Berndt and Marvin Knack took center stage in the fifth and final round. The two men were paired Mustang vs. Mustang with fairly similar dial ins, but ultimately it was Berndt from Grafton, Wisconsin, who had the starting line advantage and took the stripe when he ran 12.530 at 110.13 mph on his 12.30 estimate with two-time champion Knack clocking in at 11.822 at 117.09 mph on an 11.80 dial.

The always popular ARP Open Comp category was competitive, and Jon Pickering of Troy, Ohio, qualified right in the middle of the 30-car field in fifteenth. Eliminations were tough with so many cars in contention, but Pickering was a professional and got the job done four times in a row. He then finished with a fifth knock-out blow in the finals when he ran 8.639 at 146.00 mph on his 8.59 dial in and closed out the weekend with another win from his ’98 Mustang, and Elmer Long was relegated to the runner-up spot.

Keith Chobirko was the top qualifier for Detroit Locker Truck & Lightning when he cut a 0.005-second light in his ’01 Ranger, while Bob Dill was fifth with his 0.015-second light. In eliminations, both men sent the rest of the class packing and met in the finals, but Chobirko had mechanical trouble and bowed out early, leaving the door wide open for Dill and his ’01 Lightning to bring the win back home to Templeton, Pennsylvania, after cruising down the track in 9.240-seconds at 136.87 mph on a 9.07 dial in.

The Race Star Wheels Ford Muscle index class qualifying was dominated by Clyde Dunphy, who went closest to his index when he ran 10.528 on a 10.50 estimate. In eliminations, though, Lloyd Mikeska of Richmond, Texas, was deadly consistent with his ’16 Mustang on a 12.00 index. Three wins in a row meant Mikeska earned a place in the finals, and there, had a nearly identical reaction time to opponent John Butsko, but took the stripe easily with a 12.091 at 107.76 mph pass to capture the victory.

Eric Olson of Freeport, Illinois, took the title as the overall champion in the combined NMRA and NMCA QA1/Gear Vendors True Street class, topping the list with an 8.545-second average across this three runs with his ’83 Ford Ranger pickup truck and also scored an entry into the exclusive IDIDIT King of the Street battle to be held at the NMRA World Finals in September. Hot on his heels was multi-time winner Randy Thomas whose 8.725-second average was impressive as well. Winning the 9-second group was Bill Unkel and his ’91 Mustang, while Heinz Stock took the win for the 10-second category in his ’19 Mustang GT. The quickest 11-second car was Robert Ball’s ’15 Mustang GT, and the 12-second honors went to Mike Baker who drives a ’91 Mustang. Jeff Buck and Wayne Haley were the 13-second and 14-second winners, respectively.

The QA1 True Street participants were also invited to participate in the weekend’s Bracket class on Sunday and top honors went to Rodney Ward of Muncie, Indiana, who ran 15.121 at 82.89 mph on a 15.10 dial in during the final round to capture the win against Keith Saymore of Clarkson, Michigan, whose 10.656 at 126.09mph run on a 10.69 dial was quicker, but not better.

The NMRA Keystone Automotive Drag Racing Series wraps up with the 21st Annual NMRA All Ford World Finals and Holley Intergalactic Ford Festival at Beech Bend Raceway Park in Bowling Green, Kentucky, over the weekend of September 26-29, 2019. For more and information and advance tickets, visit www.NMRAdigital.com/KY