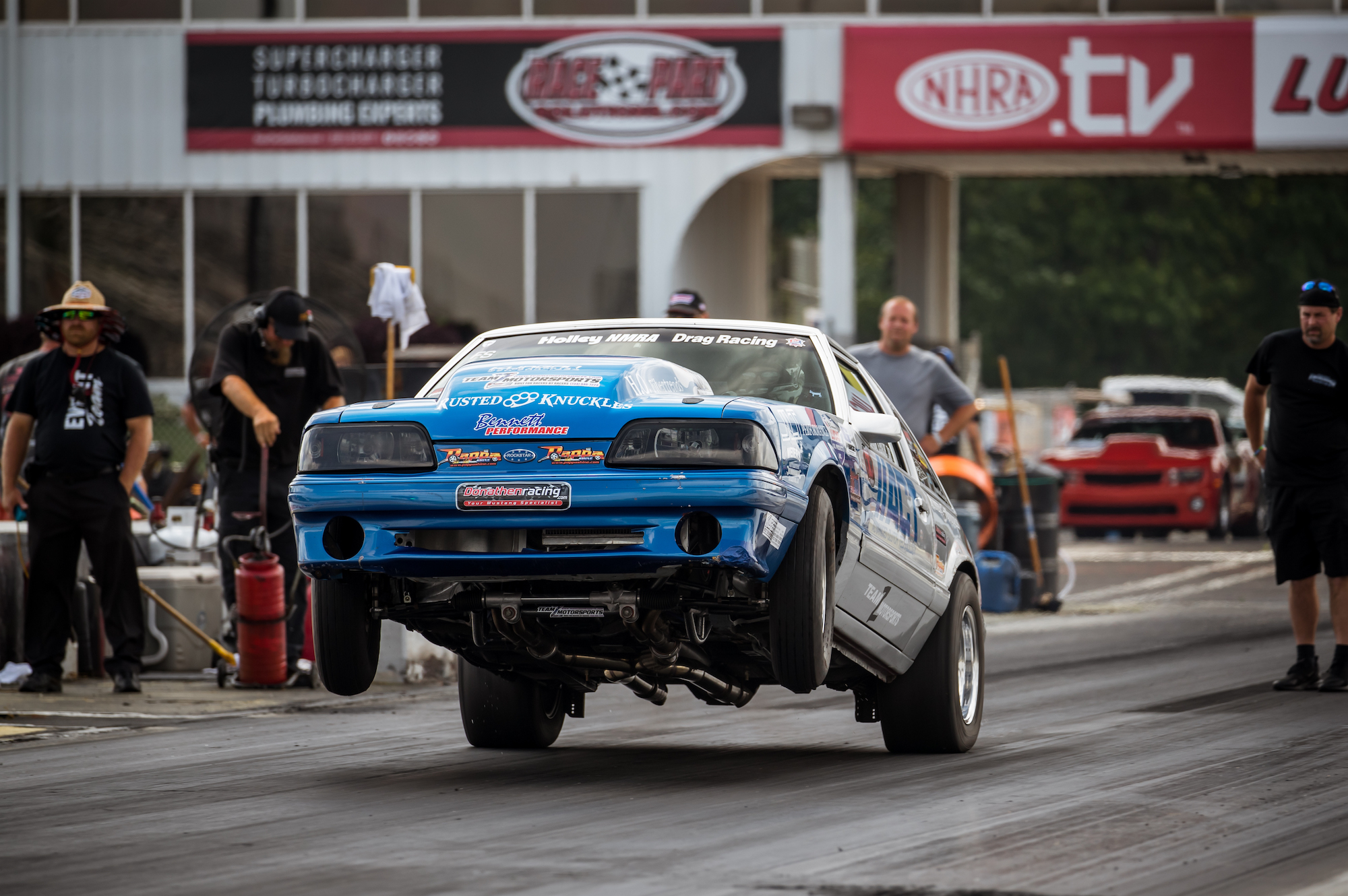 Although the 12th Annual Scoggin-Dickey Parts Center NMRA/NMCA All-Star Nationals at Atlanta Dragway in Commerce, Georgia, was originally scheduled to be run in April, the repercussions from the Covid-19 pandemic forced a date change to June 26-28, 2020. It was definitely worth the wait, though, as the event was run to completion over a near-perfect weekend and racers and fans alike were thrilled to be back out cutting lights and clicking off runs at “Georgia’s House of Speed.” A combined event for both NMRA and NMCA only added to the excitement, while the huge car show and expansive vendor midway amped up the atmosphere even further. At the event’s conclusion, champions were crowned in the Aerospace Components Winner’s Circle and cars were eagerly loaded into trailers in preparation for the next event in just a few short weeks.

In the combined NMRA and NMCA VP Racing Madditives/Mickey Thompson Street Outlaw category, Alan Felts put his newly-finished “baby Pro Mod” ’91 Mustang into the number-one spot with a 4.424 at 165.97mph blast, but spun twice in round two of eliminations and couldn’t recover. Meanwhile, former champion and Street Outlaw bad boy Phil Hines of Lebanon, Ohio, met with Tony Hobson and his recently-acquired ride for an epic final-round battle of ProCharged-powered Mustangs. Hines, who had qualified fourth, snatched the lead at the start and was able to hold it all the way to the finish where a 4.504 at 160.79mph trip from his ’01 model took down Hobson’s effort of 4.514 at 160.86 mph in his ’90 Fox body.

It was Mike Freeman’s name topping the list after qualifying had been finalized for twenty-four NMRA/NMCA Edelbrock Renegade/Xtreme Street entries, as his ’88 Mustang put in an impressive performance of 4.687 at 148.31 mph. In eliminations, all the glory belonged to Bob Zelenak of Uniontown, Pennsylvania, and his ’93 Mustang. Zelenak translated his earlier number-ten qualifying performance of a 4.832 at 144.44 mph to a nearly identical 4.832 at 145.55mph run in the finals and was able to add an NMRA Edelbrock Victor trophy to his collection while Scott Grove—who had qualified thirteenth—took the runner up consolation prize with his 5.109 at 139.37mph eighth-mile run. 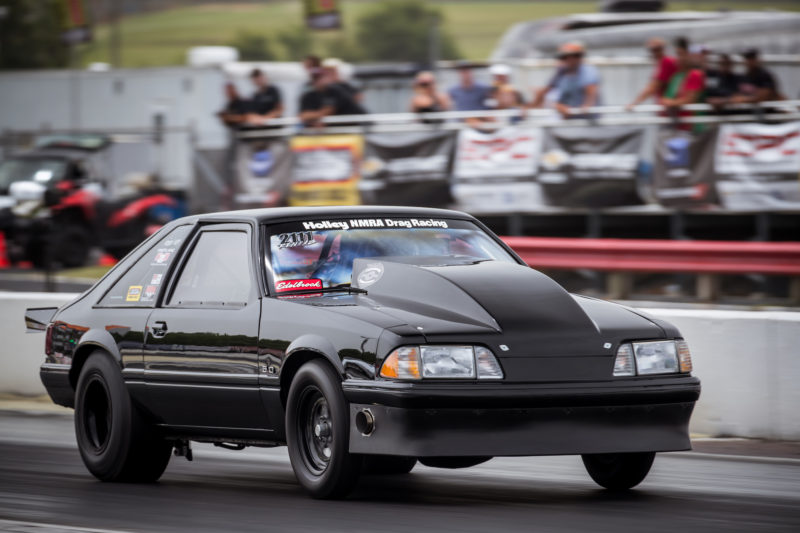 The lead in JDM Engineering Limited Street qualifying belonged to Samantha Moore and her ’14 Mustang, as the duo clocked an 8.669 at 157.70 mph quarter-mile time slip. A hurt transmission took her out in round one of eliminations, though, and opened the door for UPR Products’ own Bill Putnam and Blow By Racing-backed Jason Davis to face off in the finals. Davis, however, had cooked his turbocharger earlier in the day and was only able to take the light as he watched Putnam, who had qualified second, fly down the track in his orange ’94 Mustang for an uncontested win.

Rocking out with his ’89 Mustang in Richmond Gear Factory Stock qualifying, John Leslie Jr. (feature image) earned the number-one placement when he went 10.334 at 128.71 mph. The Rockstar lived up to the name during eliminations, as Leslie rocked out round after round in eliminations and took down Mike Bowen, who had qualified third on a hole shot, on his want to the Aerospace Components Winner’s Circle.

G-Force Racing Transmissions Coyote Stock is always crazy competitive, but Michigan’s Frank Paultanis was on a tear right from the start, as he was the only driver to click off a 10-teens number in qualifying, which rightfully put him in the top spot with his ’04 Mustang. In eliminations, his performance advantage was clearly evident as he turned on win light after win light with his Coyote-powered ’04 Mustang and capped off a perfect weekend with a trip to the Aerospace Components Winner’s Circle after putting Nathan Stymiest back on the trailer in the finals.

Just 0.003-seconds away from a perfect light behind the wheel of his ’89 Fox body Mustang, Chris Graff was the number-one qualifier in Exedy Racing Clutch Modular Muscle qualifying. Coming back from a stint in no prep racing, though, was Texas-based racer James Meredith of Triangle Speed Shop fielding his ’73 Capri. Meredith proved things really are bigger in Texas, including wins, as he defeated reigning champion Charlie McCulloch and his ’04 Mustang Cobra in a tight final elimination round where McCulloch went 10.980 on his 10.88 but Meredith managed a 9.967 on his 9.91. 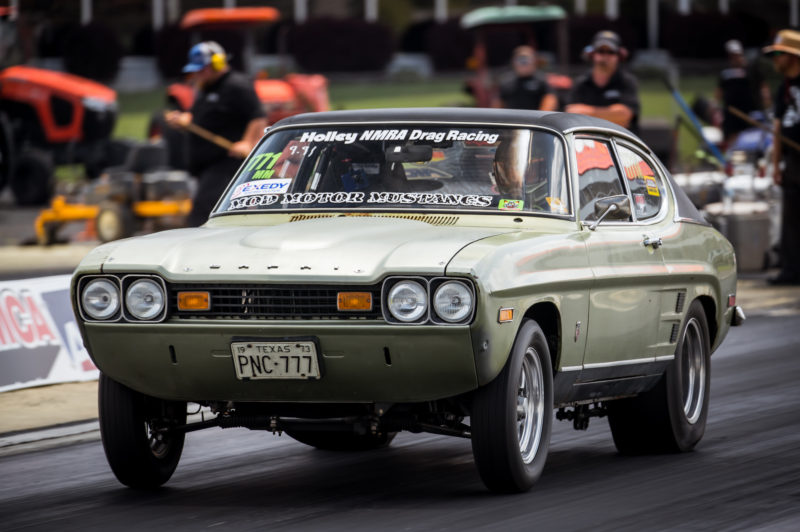 David Mormann of Tampa, Florida, was nearly dead-on when he ran 11.005 on his 11.00 dial with his ’70 Mustang Mach I during FSC Ford Muscle qualifying to land in the top placement. He kept up the consistency throughout eliminations to muscle his way through to the finals. Kevin Sanders had qualified third and also made it to the last round of the weekend, but Mormann had him both at the start and at the stripe and it was the man from the Sunshine State who closed things out on a high note. 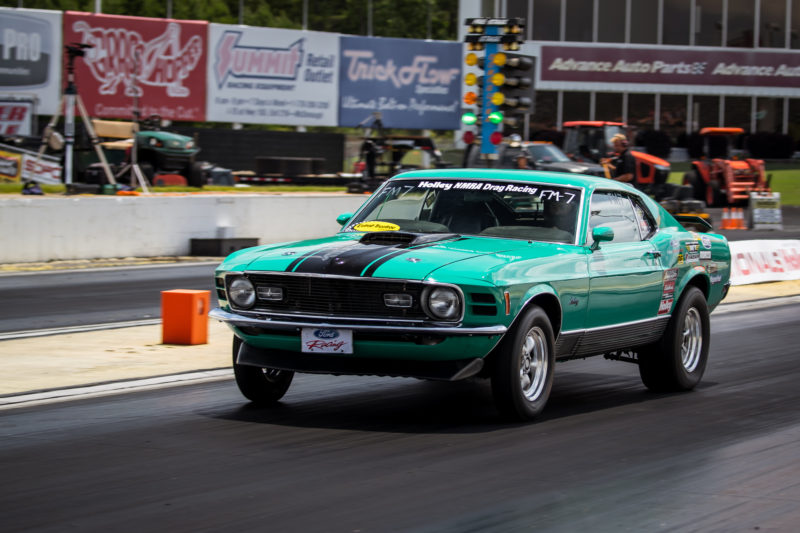 Sitting in first after ROUSH Performance Super Stang qualifying, Andy Ransford’s 0.039-second reaction time in his ’06 Mustang definitely did the job, but it was Lloyd Mikeska and Russell Haskins who had the advantage during eliminations. Mikeska, the number-three qualifier from Richmond, Texas, and Haskins, the number-two qualifier from Marietta, Georgia, battled it out in a heated final round, but ultimately the win light lit in Mikeska’s lane.

Nearly two dozen competitors came out to contest the ARP Open Comp class, but Tom Hoffman had the quickest reaction time during qualifying with an 0.003-second trigger from his Mustang. Hoffman’s run ended in round two, but Bill Jones and Mel White, both of Nashville, Georgia, and both with 0.019-second reaction times in qualifying to wind up ninth and eighth, respectively, ran side by side in the finals for a ‘60s-era Falcon vs Mustang showdown. At the stripe, it was Jones whose 9.214 at 149.91 mph run on a 9.21 dial was a winner over White’s 10.977 at 121.57 mph pass on his 11.06 goal.

Recovering from his battle with Covid-19, Vinnie Telesco was missed by his usual Detroit Locker Truck & Lightning class as well as the entire NMRA family. Keith Chobirko of White Oak, Pennsylvania, however, set the pace in qualifying with his ’01 Ranger when he cut a quick 0.002-second light and stayed right on the money all throughout eliminations. In the final round pairing, Chobirko defeated the number two qualifier, Bob Dill, with a winning package.

A large group of QA1/TorqStorm Superchargers True Street racers came out to enjoy a 30-mile street cruise and three back-to-back trips down the quarter mile after so much time in quarantine, and it was Mark Scordato of Newton, New Jersey who was the overall winner as his ’68 Pontiac GTO clocked the quickest average of 9.463-seconds. Hot on his heels was Dan Nusbaum from Crossville, Tennessee, who averaged 9.926-seconds in his ’87 Mustang to take the overall runner-up honors. Alex Corella won the 10-second group, Ben Bramlett took top honors for the 11-second section, Mike Baker was the winner in the 12-second group, Dylan Derby bested the 13-second average, Kay Ward had the lead in the 14-second pack, and Allen Smith was the final winner for the 15-second bunch.