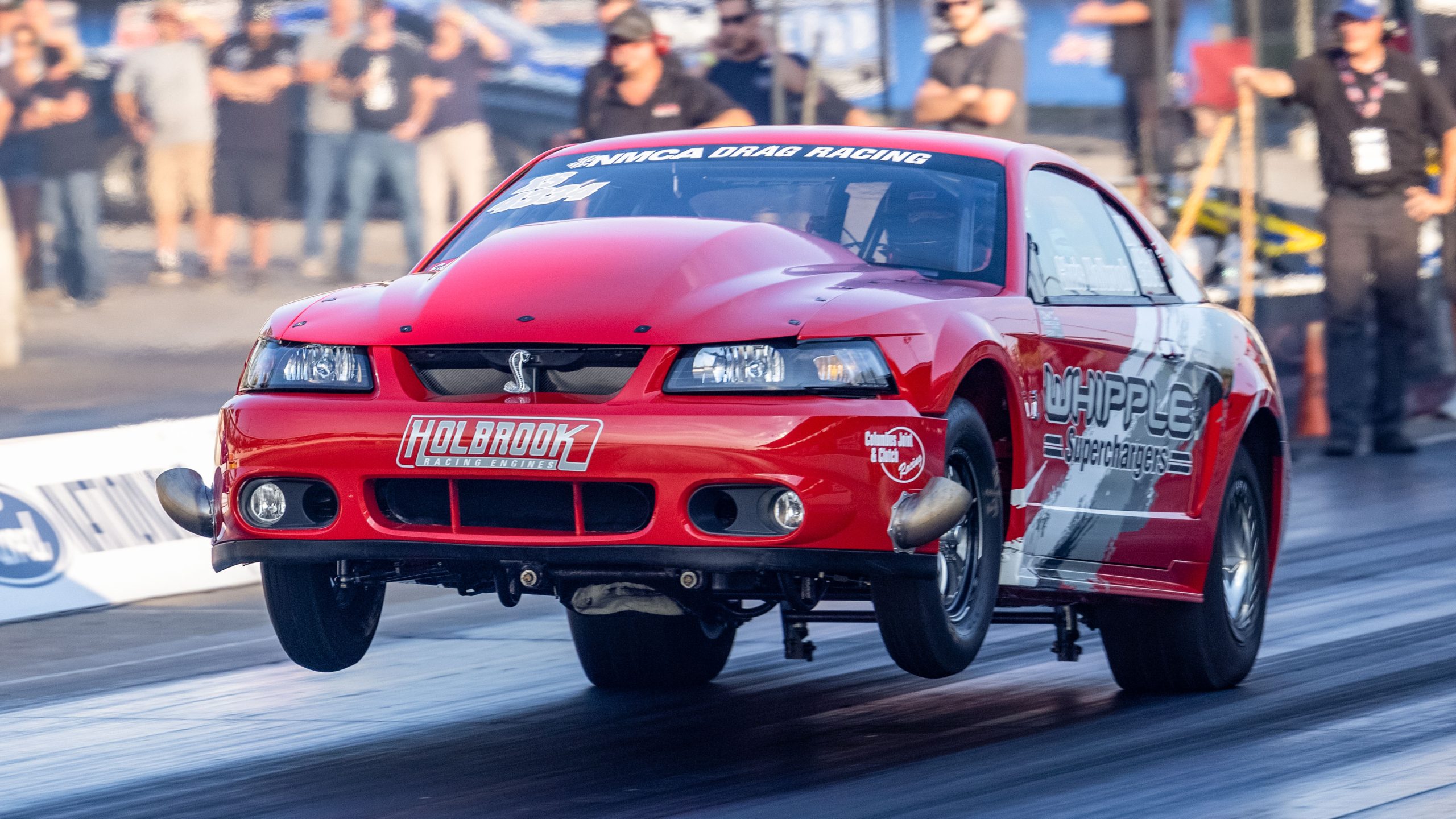 This event marked the third year that Holley injected its infectious Holley Intergalactic Ford Festival into the event. Attendees were treated to asphalt-ripping drifting that included Vaughn Gittin Jr. and Chelsea DeNofa, auto-crossing, burnout mayhem, a Grand Champion competition, and new for 2021, an off-road course that featured Vaughn Gittin Jr. and Loren Healy and their Ultra 4 Ford Broncos tearing it up. 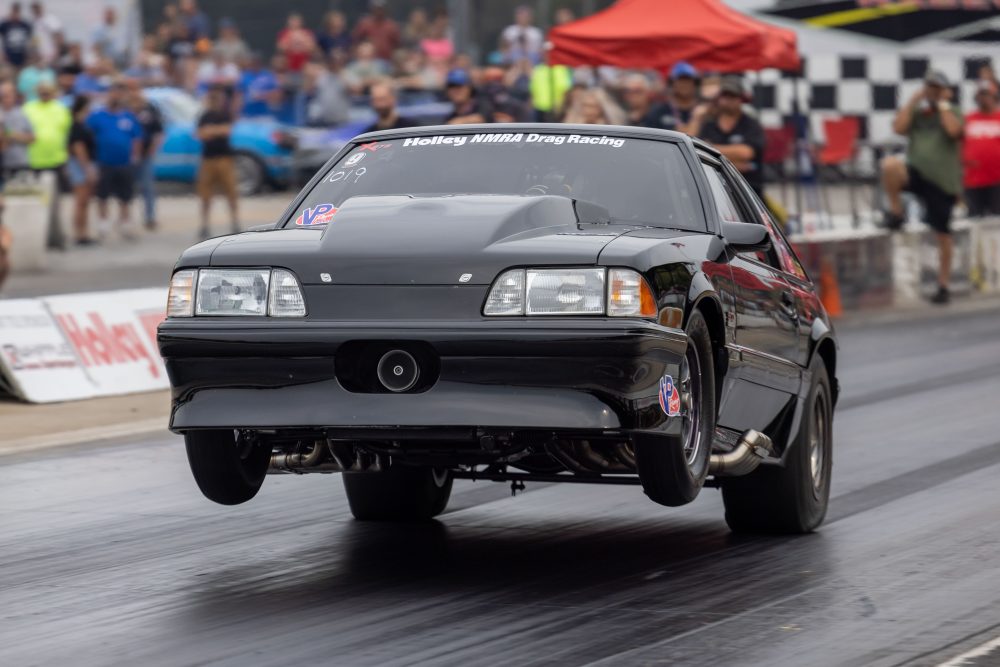 VP Racing Madditives Street Outlaw driver Alan Felts set the pace in qualifying with a 4.315 elapsed time, and was followed closely by John Urist with a 4.331 and Earl Stanley with a 4.353. Points leader Steve Halprin had a broke bye in round one, but went out in round two, leaving the door open for Urist to take a swing at the championship. Urist dispatched Felts in the third round en route to the final, where he ultimately lost to Stanley, 4.46 to 4.48.

Eric Bardekoff led defending Edelbrock Renegade champion Joel Greathouse final race of the season, but it was Haley James who targeted the event win after qualifying number one with a 4.554. James would bow out in round two, and Bardekoff and Greathouse met in round three, with Bardekoff taking the victory. In the final round, Chris Holbrook took the win over Bardekoff in an all-Whipple-supercharged final battle.

Samantha Moore set the pace in JDM Engineering Limited Street with an 8.15 elapsed time and cut through the field until she reached the final round. There, she met points leader and defending champion, Bill Putnam. Putnam took the starting line advantage, which earned him the win at the stripe after both drivers recorded identical 8.332 runs.

G-Force Transmissions Coyote Stock racer Shane Stymiest came out swinging, and took the number one qualifier spot with a 9.733. From there, he charged through the field until he met Charlie Booze Jr. in the final round. Both reactions times were close, but Stymiest raced ahead to the win with a 9.83 over Booze’s 11.84 run.

In another dominating performance, Mike Bowen topped the qualifying sheets in Richmond Gear Factory Stock with a 10.08 run. After taking a bye run and defeating Damien Stephens and Justin Fogelsonger, Bowen met Mark Anderson in the final round of competition. There, Anderson got a slight jump at the start, but slowed, allowing Bowen to take the victory with a 10.21 pass. 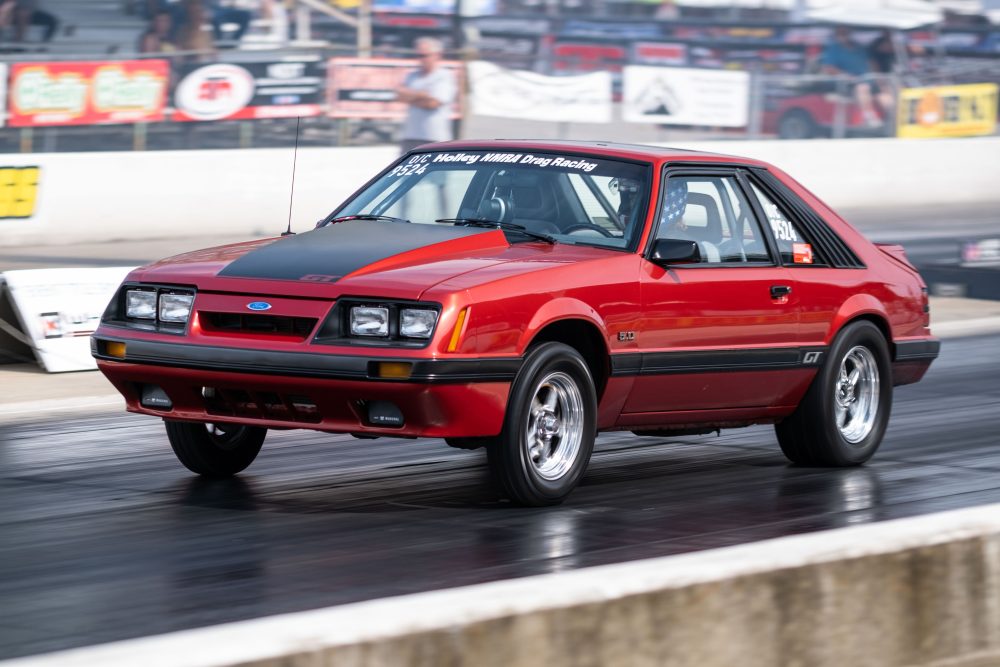 The ARP Open Comp class is always full of tough competitors and anyone can win at any time. At Beech Bend Raceway, the final round came down to Brayden Creamer and Woody Pack. Both drivers did their jobs well off the line, but it was Creamer who was victorious, pushing Pack to break out at the finish.

Perhaps it was the fact that the Capri Swarm gathers here at Beech Bend Raceway Park for the event that brought good luck to 1973 Ford Capri owner and Exedy Racing Clutch Modular Muscle driver James Meredith. Not only did the Coyote-powered classic log a .002-second reaction time in the final round, but it also took Meredith to the winner’s circle, with Meredith going 9.675 on a 9.61 to Adam Cox’s 10.176 on a 10.11 (.042 RT).

In HP Tuners Super Stang action, 2020 champion Kevin McKenna took the top qualifying spot, but as eliminations kicked off, he bowed out in the first round. The final round of competition featured frequent True Street winner Rodney Ward, who was victorious over Mike Moistner.

A tough field of Ford trucks in Detroit Locker Truck & Lightning hauled the mail in qualifying and eliminations. Mike Roup was leading the points chase coming into the event and qualified number one to put everyone on notice. After taking a bye in round one, Roup fell to Robert Chuhran in the second. Chuhran, meanwhile drove to the final round where he fouled at the start against Amanda Saad, who as .002 on the tree and 10.209 on a 10.14 dial in.

Fastest Street Car Magazine Ford Muscle brings a wide variety of vehicles to the class, and it was an all-classic matchup in the final round of competition. Mark Schiffner in his 1970 Ford Torino fought hard to get there, but took the easy win when Matthew Keiser in his 1968 Mustang went -.102 red at the start.

Mickey Thompson Street Car Challenge was a new class at select 2021 events and the heads-up eliminator featured fast Fords that didn’t quite fit into a particular category. Leading the qualifying field was 2020 King of the Street Donato Sierchio who clocked a 7.51. He would drive to the final round of competition to face Dave Liechty. While Liechty’s 2006 Mustang was impressive in its own right, clocking an 8.42 elapsed time, it was Sierchio who drove to the NMRA Winner’s Circle with a 7.637 run. 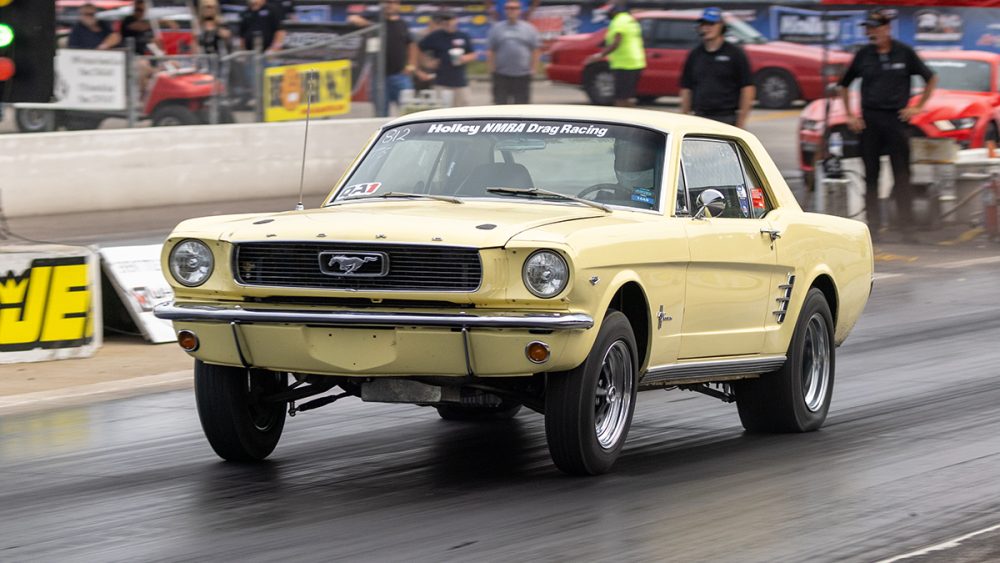 QA1 True Street at Beech Bend Raceway is always exciting, as some of the quickest street-legal cars turn out in droves at the NMRA finals. This year, 126 cars teched, 118 were able to take the requisite cruise around Bowling Green, and 99 cars survived for the back-to-back passes. Scott Barker took the overall win in his 1966 Mustang with an 8.78 average, followed by True Street veteran Troy Eaton in the runner up spot with an 8.801. Matthew Ballard grabbed the 9-second award with a perfect 9.000 average, Jason Wolf collected the 10-second prize at 10.029 and Kevin McCotter was the 11-second winner with an 11.118 average. The 12-second win had to be decided by MPH, as Both Wade Whicker and John Cole averaged 12.004. Whicker had the speed to secure the win. Rodney Ward averaged 13.007 for the 13-second award, Darleen Simmons was the 14-second winner with a 14.042 average, and Belinda Moore, one of the winningest True Street drivers, took home the 15-second plaque with a 15.095 average.

TREMEC Stick Shift Shootout pits the eight quickest manually shifted cars from True Street against each other in their own speed contest. In the final round, Bob Myers in his turbocharged, four-cylinder Mercury Capri was victorious over Andrew Lukanov in his 2003 Mustang Cobra.

The Capri Club of North America returned to the NMRA All-Ford World Finals. In the final round of competition, Chris Rolls grabbed the win after James Meredith broke out with a 9.609 on a 9.60 dial in at the top end.

The NMRA Finals played host to the RacePagesDigital.com Bracket Open. As the day came to a close, the final three racers, Bill Feckley, Stephen O’Neal, and Danny Scheele all opted to split the payout.

Carrying on the tradition from the 2020 season, NMRA champions were honored for all of their accomplishments in the Winner’s Circle with a special photo session and video interview. Please visit www.NMRAdigital.com and www.racepagesdigital.com, and the series’ social channels, in the days to come for stories and videos that feature the champions.

The NMRA congratulates all of its 2021 winners and champions. We’ll see you back at it next year when the next great Holley NMRA Drag Racing season kicks off with the 28th Annual NMRA Spring Break Shootout at Bradenton Motorsports Park in Florida over the weekend of March 3-6, 2022! For more and information and advance tickets, visit www.NMRAdigital.com.