The NMCA Muscle Car Nationals is excited to introduce Drag & Drive Shootout in partnership with Sick the Magazine, bringing select long haul street car participants to three events in 2022. In addition, Gear Vendors has jumped in as the sponsor of this exciting invitational that will feature cars driven by stars like Tom Bailey, social media influencer Alex Taylor, and 2-time Drag Week champion Dave Schroeder!

In addition to the 8-car shootout, Sick the Magazine has been named Presenting Sponsor of the NMCA All-American Nationals, held at the prestigious and world-renowned Summit Motorsports Park (Norwalk, Ohio).

“As the Fastest Street Car Shootout movement turns 30 years old in 2022, we are looking forward to hosting Tom Bailey, Sick the Magazine, and his 8-car shootouts during three events. The cars are amazing machines and we’ve had fun with Tom a few years ago during the Muscle Car Mayhem when he ran Xtreme Pro Mod and also led our TorqStorm True Street 30-mile cruise,” said Rollie Miller, General Manager and National Event Director of the NMCA Muscle Car Nationals.

Long haul street car events are growing in popularity with the most notable being Hot Rod Magazine’s Drag Week and they’ve led to the Drag & Drive genre in the sport. The contestants often drive more than 1,000 miles and participate at a different drag strip each day. Sick the Magazine was founded by Tom Bailey to give in-depth coverage to these unique street cars and the enthusiast who build and race them.

For more information about the NMCA and the Gear Vendors Drag & Drive Shootout, presented by Sick the Magazine, visit www.NMCAdigital.com 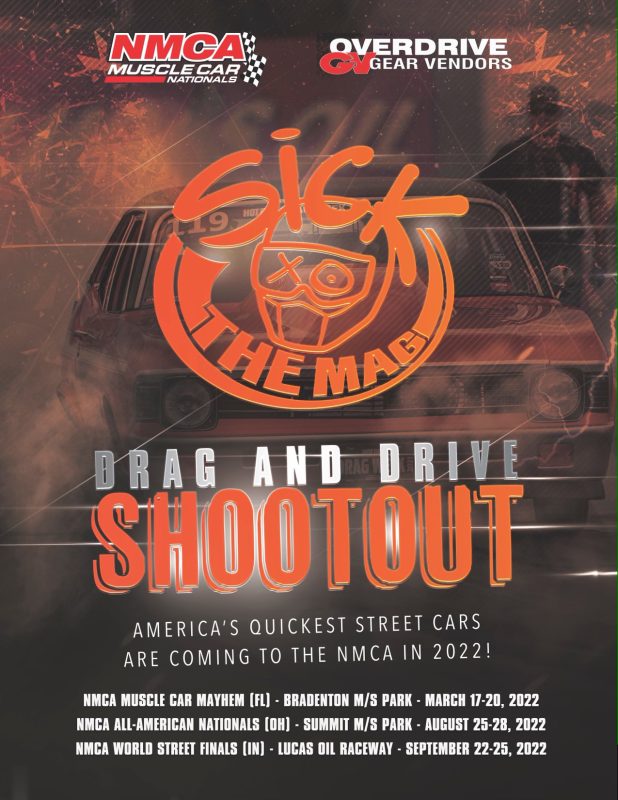