A squad of highly competitive and terrifically talented NHRA drivers trounced a team of NASCAR stars 19-5 in Wednesday night’s softball game in Kannapolis, N.C., in front of a boisterous crowd at CMC NorthEast Stadium, the home of the Kannapolis Intimidators of the South Atlantic League.

Morgan Lucas went the distance on the mound for NHRA, scattering 8 hits in 7 complete innings while only giving up one earned run. The NHRA pounded out 27 hits in the game, with every batter in the line-up collecting at least one hit.

Defensively, Antron Brown stole the show in center field, making two spectacular catches. His first, early in the game, was a leaping grab going back to the wall, and he then followed that up, late in the game, by coming in fast on a sinking line drive, catching it at his shoe tops as he tumbled.  Overall, the NHRA defense was nearly impervious, with a stout infield of Tony Schumacher at third, Bob Vandergriff at short, Ron Capps at second, and Matt Hagan at first.  Del Worsham, Brandon Bernstein, JR Todd, Shawn Langdon, Clay Millican, Chad Head, and Courtney Force rounded out the victorious line-up.

Force’s entry into the game as a pinch hitter in the top of the 7th was one of the night’s more memorable moments. Planning only to attend in order to sign autographs and offer moral support, her NHRA brethren used copious amounts of peer pressure to get her to the plate, and the crowd roared its approval. After a swing and a miss, Force grounded a single to the left side of the infield, and the hilarity ensued. Already down by two touchdowns, the NASCAR team took advantage of her spot on the field as they stopped the Funny Car driver at each base in order to have their photo taken with her. When she reached third base after a couple of hits, nearly the entire NASCAR squad gathered around for a group shot.  Considering the NASCAR team had, at that point, instituted a rule-bending “prevent defense” that featured 14 players on the field, it was quite a group shot.

The lone earned run scored by the stock car contingent was actually hit by a Wounded Warrior veteran, Mattias Ferraro, a double-amputee playing on two prosthetic legs. His blast drew one of the biggest ovations on the night, from fans and players alike.

“What a great night, and the best part is we raised some money for a couple of great charities,” Vandergriff said. “Our guys were really motivated, coming in here to the heart of NASCAR country, and we had quite a bit of excitement and chatter in the dugout. It was fun, and the goal now is to make this an annual thing with the NASCAR guys, and keep it growing. We had a great crowd for this inaugural game, and once the word spreads after this first one I think we’ll begin to pack this place. 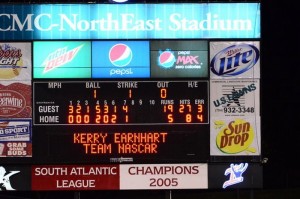 “It was great to get out there and play, and we all had a blast. I thought everyone on our team played great, and the competitive juices were flowing. We had guys sliding into home to score runs, diving for balls all over the field, and smacking the heck out of it at the plate. I’m already looking forward to the next time we can do this, and I bet the NASCAR guys will have revenge on their minds.”

The NHRA team was assisted on the field by base coaches Alan Johnson and Bryn Smith, a former big league star pitcher for the Expos, Cardinals, and Rockies.

The game benefited Children’s Healthcare of Atlanta and The Armed Forces Foundation.