On Friday, April 16, just before the NHRA’s Camping World competitors take to the track for the first round of qualifying for the Vegas 1 event, Schumacher and Kalitta will strap into nitro Funny Cars and line up to make a pass down the renowned Vegas dragstrip. The Hall-of-Fame owners will be piloting machines prepared by their race teams, and their modern-day Funny Car bodies will be wrapped to reflect their favorite liveries from their former time behind the wheel. They will make one pass only, and the winner will be rewarded with bragging rights.

While it has been nearly seven decades combined since Schumacher and Kalitta traded in their firesuits for dress slacks, the NHRA mainstays feel confident in their ability to successfully defeat their opponent in the opposite lane. Schumacher, who retired from driving in 1974, and Kalitta, who stepped out of the seat in 1998, made practice runs and renewed their competition licenses in a closed test session last month. The former champion drivers opted to partake in the highly-anticipated one-off race as a way to thank the NHRA’s loyal fanbase for weathering the turbulent 2020 season.

“We know the fans will get a kick out of this, and this is our way of saying ‘Thank You’ for sticking with us during the tough season we all endured last year,” said Schumacher, owner of Don Schumacher Racing, the NHRA’s winningest organization. “Never in a million years did I think I’d get back behind the wheel of one of these nitro-breathing machines, but here we are. Connie and I have enjoyed kicking each other’s butts with our race teams all these years, and now we’ll get to go head-to-head on the starting line for the first time and really settle the score, and I have no doubt my Dodge Charger will come out on top.”

“I am doing this for the fans and everyone that has supported Kalitta Motorsports over the years, especially last season,” said Kalitta, owner of Kalitta Motorsports, and crew chief for Shawn Langdon last year’s US Nationals Top Fuel champion. “Don and I have battled each other for decades and I jumped at the chance to kick his butt in a Funny Car. I have been talking with my Funny Car drivers and they have given me some great tips. I know I will be able to get the job done in Vegas and I am looking forward to racing this Toyota Camry Funny Car to another win.”

Schumacher and Kalitta are expected to exceed the 330-mph benchmark during the exhibition event, and their 11,000-horsepower floppers will be tuned by their respective organizations’ braintrust of Funny Car crew chiefs. Both are hoping to reset their career-best E.T.s by clocking runs in the low 4.0/high 3.9-second zone, and if you’re still reading this, now is probably a great time to say Happy April Fool’s Day, and let you know that Schumacher and Kalitta will be leaving the driving to their current roster of skilled nitro pilots. 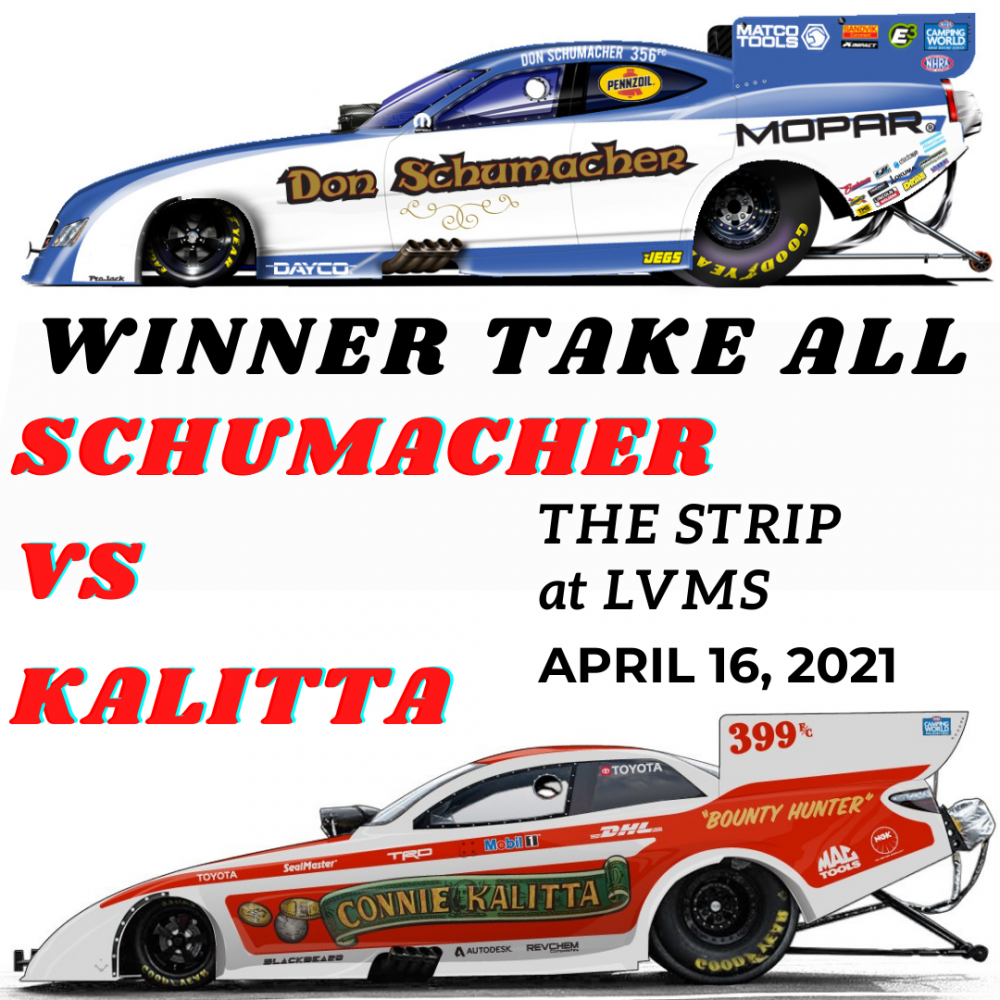