Only one spot remains open in each of the NHRA Traxxas Nitro Shootout fields for Top Fuel and Funny Car. Those two positions will be determined by NHRA fan votes and a pair of lottery-style drawings.

Six Top Fuel drivers are eligible for the fan-vote/lottery position, and seven Funny Car drivers are candidates for the final spot in that category.

Fan voting on NHRA’s Facebook page is now open and will remain open until noon on Tuesday, Aug. 27. Fans can vote for their favorite eligible driver in each category by clicking here. 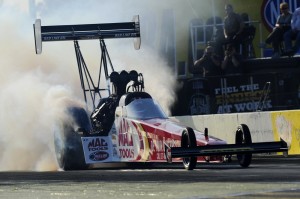 The fan-voting process will determine the number of lottery balls that each eligible driver will be assigned during the Traxxas Shootout lottery drawings. The Traxxas Shootout lottery drawings will be conducted during a press conference for the Chevrolet Performance U.S. Nationals on Wednesday, Aug. 28, at Monument Circle in downtown Indianapolis. The Traxxas Nitro Shootout will be contested during the Chevrolet Performance U.S. Nationals, Aug. 28-Sept. 2, at Lucas Oil Raceway at Indianapolis.

The winners of the fan vote and lottery-style drawings will earn the opportunity to meet the Traxxas Nitro Shootout top seeds – Shawn Langdon in Top Fuel and Matt Hagan in Funny Car – in the opening rounds of the special event.

Jack Beckman secured the No. 7 position in Funny Car following Sunday’s racing at the Lucas Oil NHRA Nationals at Brainerd, Minn., by virtue of being the highest non-winning points-earner. Also, Johnny Gray claimed the third seed in Funny Car via a tie-breaker over Cruz Pedregon, due to his 2-1 head-to-head season record advantage over the Snap-on Tools Toyota driver. 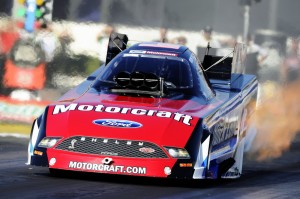 Below are the drivers who have qualified for the Traxxas Nitro Shooutouts and their first-round pairings for the lucrative bonus races that will award the winning drivers $100,000 each.

2. Spencer Massey vs. No. 7 Bob Vandergriff

3. Tony Schumacher vs. No. 6 Steve Torrence

4. Khalid alBalooshi vs. No. 5 Antron Brown

The Traxxas Nitro Shootout will be showcased in ESPN2HD’s Sunday race coverage from the Chevrolet Performance U.S. Nationals.