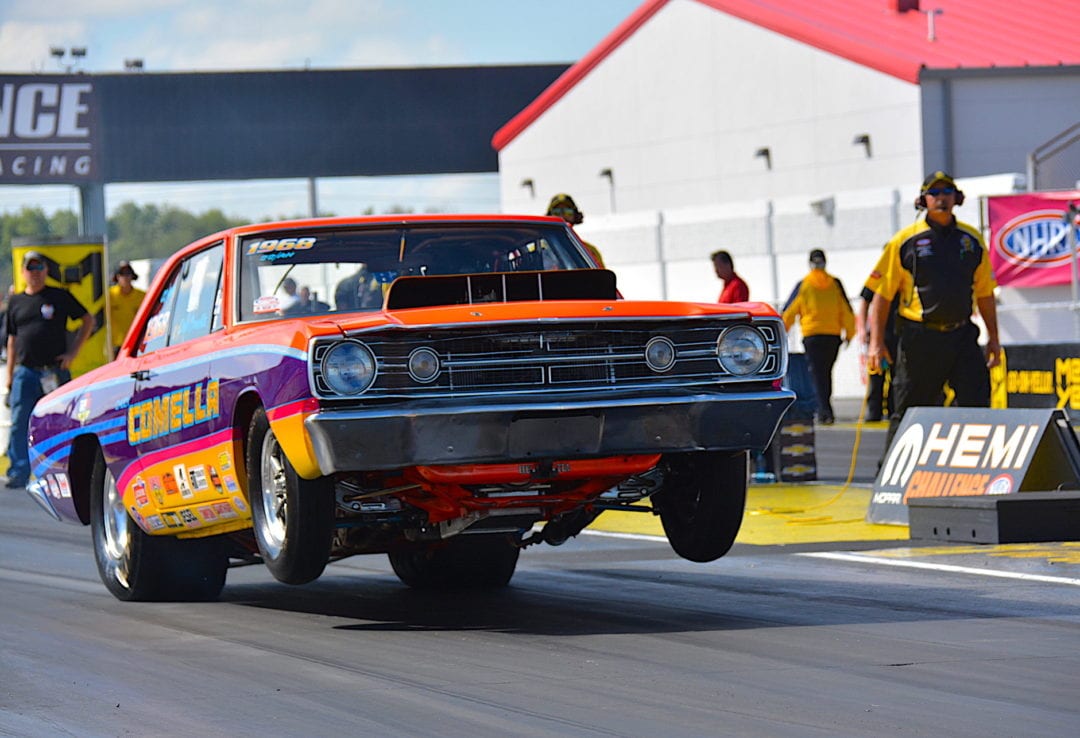 The Dodge brand will serve as title sponsor of the NHRA Dodge HEMI® Challenge, returning the fan-favorite event to the prestigious NHRA U.S. Nationals for the 18th consecutive year.

The Dodge brand announced title sponsorship of the NHRA Dodge HEMI® Challenge, returning the fan-favorite event to the prestigious NHRA U.S. Nationals for the 18th consecutive year. The 2018 NHRA Dodge HEMI Challenge, scheduled to take place August 30-31 at Lucas Oil Raceway at Indianapolis, will also celebrate the 50th anniversary of the Mopar-powered 1968 Dodge Dart and Plymouth Barracuda Super Stock cars that compete head-to-head in the event.

The announcement arrives on April 26 — the date (4/26) celebrated by Dodge and Mopar enthusiasts as HEMI Day in honor of the historic 426 HEMI engine that powers the classic Super Stock cars, as well as all current NHRA Funny Car and Top Fuel machines. A special HEMI Day celebration video can be viewed at Dodge Garage.

The NHRA Dodge HEMI Challenge showcases Super Stock/A-HEMI (SS/AH) NHRA Sportsman class competitors battling on the quarter-mile in 1968 Dodge Dart and Plymouth Barracuda machines. The legendary 1968 Mopar “package” cars — so named because they were purpose built as a distinct “package” for use solely on the drag strip — serve as precursors to the modern-day package car, the Mopar Dodge Challenger Drag Pak.

“The Dodge brand is proud to serve as title sponsor of the NHRA Dodge HEMI Challenge, an event that spotlights the legacy and power of the 426 HEMI engine,” said Steve Beahm, Head of Passenger Cars, Dodge//SRT, Chrysler and FIAT, FCA North America. “This year marks the 50th anniversary of the Dodge Dart and Plymouth Barracuda Super Stock cars that debuted back in 1968 and are still competing today, which makes our support of this edition of the HEMI Challenge extra special.”

On the line will be bragging rights and the unique 42.6-lb NHRA Dodge HEMI Challenge trophy, created as a callout to the 426 HEMI engine. All 16 drivers to reach the elimination rounds will receive cash rewards, including the ultimate prize of the $15,000 winner’s purse.

“The Dodge HEMI Challenge is one of the most hotly contested events for our Sportsman racers during the season,” said Brad Gerber, NHRA Vice President and Chief Development Officer. “The interest Dodge has in this program is greatly appreciated by the competitors.”

Dodge in NHRA
In addition to the NHRA Dodge HEMI Challenge, the brand also recognizes dedicated and passionate Sportsman racers through the Dodge Top Finisher award, first introduced in 2017. The award includes a $500 reward to the Stock and Super Stock competitors who advance the furthest at all 24 national events behind the wheel of a Mopar-powered vehicle.

“At each national event, our Mopar-powered racers are keenly aware of the bonus presented by Dodge,” said Graham Light, NHRA Senior Vice President, Racing Operations. “In the second year of this program, the benefits have been felt by those racing in the two categories.”

Earlier this year, Dodge also announced title sponsorship of the Dodge Mile-High NHRA Nationals Powered by Mopar, scheduled for July 20–22 at Bandimere Speedway near Denver. This year will also mark the third consecutive in which Dodge will serve as the title sponsor of the Dodge NHRA Nationals in Reading, Pennsylvania, which runs September 13-16.

The supercharged partnership of Dodge and Mopar in NHRA also includes increased sponsorship of Leah Pritchett’s Top Fuel dragster, continuing support as primary sponsor of Matt Hagan’s Dodge Charger R/T Funny Car and a new 4,800-square-foot exhibit that combines the brands’ rigs to form one of the largest displays on the NHRA Manufacturers Midway.

His streak of victories was interrupted by Rick Houser in 2007 and 2013; his father Charlie Westcott Sr. in 2009; and Jim Daniels, who took bragging rights in 2010. Lloyd Wofford claimed victory in 2015 at the 15th anniversary event. Jim Daniels’ son, Jimmy Daniels, is the defending champ, with back-to-back victories in 2016 and 2017 at the event.