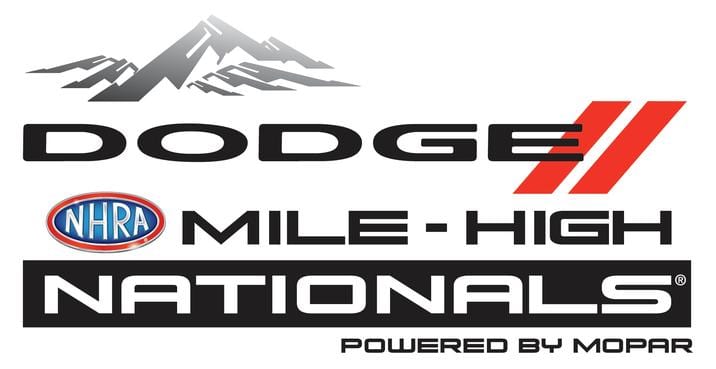 Dodge has signed on as title sponsor of the NHRA Mello Yello Drag Racing Series national event at Bandimere Speedway in Denver.

The 2018 Dodge Mile-High NHRA Nationals Powered by Mopar marks the 30th year that FCA US LLC brands are race sponsors, one of the longest partnerships in all of motorsports. Mopar stands with Dodge as presenting sponsor for the challenging high-altitude event, staged in the picturesque Rocky Mountains, continuing its decades-long association with Bandimere Speedway and NHRA racing.

“Performance and competition fuel Dodge owners and the Dodge//SRT team every day,” said Steve Beahm, Head of Passenger Cars, Dodge//SRT, Chrysler and FIAT, FCA – North America. “The sounds, smells and thrills of drag racing bring this attitude to life for the thousands of Dodge and Mopar fans who make the Mile-High NHRA Nationals a ‘must-see’ event.”

One of the longest-running NHRA national events, the Dodge Mile-High NHRA Nationals Powered by Mopar is a highly anticipated and a fan favorite in the series.

“We are excited to welcome Dodge on board as the title sponsor for the Mile-High Nationals,” said Brad Gerber, NHRA vice president and chief development officer. “Fans travel from all over the country to experience NHRA drag racing in Denver. It’s fitting that they make this race a part of the powerful Dodge brand.”

“The 2018 season is a year of celebrations as Bandimere Speedway commemorates 60 years of speed and 30 years of partnership with FCA US,” said John Bandimere III, Executive Vice President and General Manager of Bandimere Speedway. “We are proud to have Dodge taking on the lead role in the sponsorship of the Mile-High NHRA Nationals, while continuing with Mopar power as the presenting sponsor. During the last three decades we have had the privilege to see Mopar lead the way in performance, and bringing in the Dodge brand offers a new level of excitement and opportunity. The addition of night qualifying on Saturday continues to elevate the excitement and performance level making the Dodge Mile-High NHRA Nationals, one of the premier events on the tour.”

Bandimere Speedway will celebrate its 60th anniversary of operation with events throughout the racing calendar, along with the Dodge Mile-High NHRA Nationals Powered by Mopar.

The supercharged partnership of Dodge and Mopar in NHRA includes increased sponsorship of Leah Pritchett’s Top Fuel dragster, continuing support as primary sponsor of Matt Hagan’s Dodge Charger R/T Funny Car and a new 4,800-square-foot exhibit that combines the brands’ rigs to form one of the largest displays on the NHRA Manufacturers Midway.

Dodge fans can stay in touch with racing news and events at the Dodge Garage, a one-stop digital content hub and premier destination for drag racing and muscle car enthusiasts.