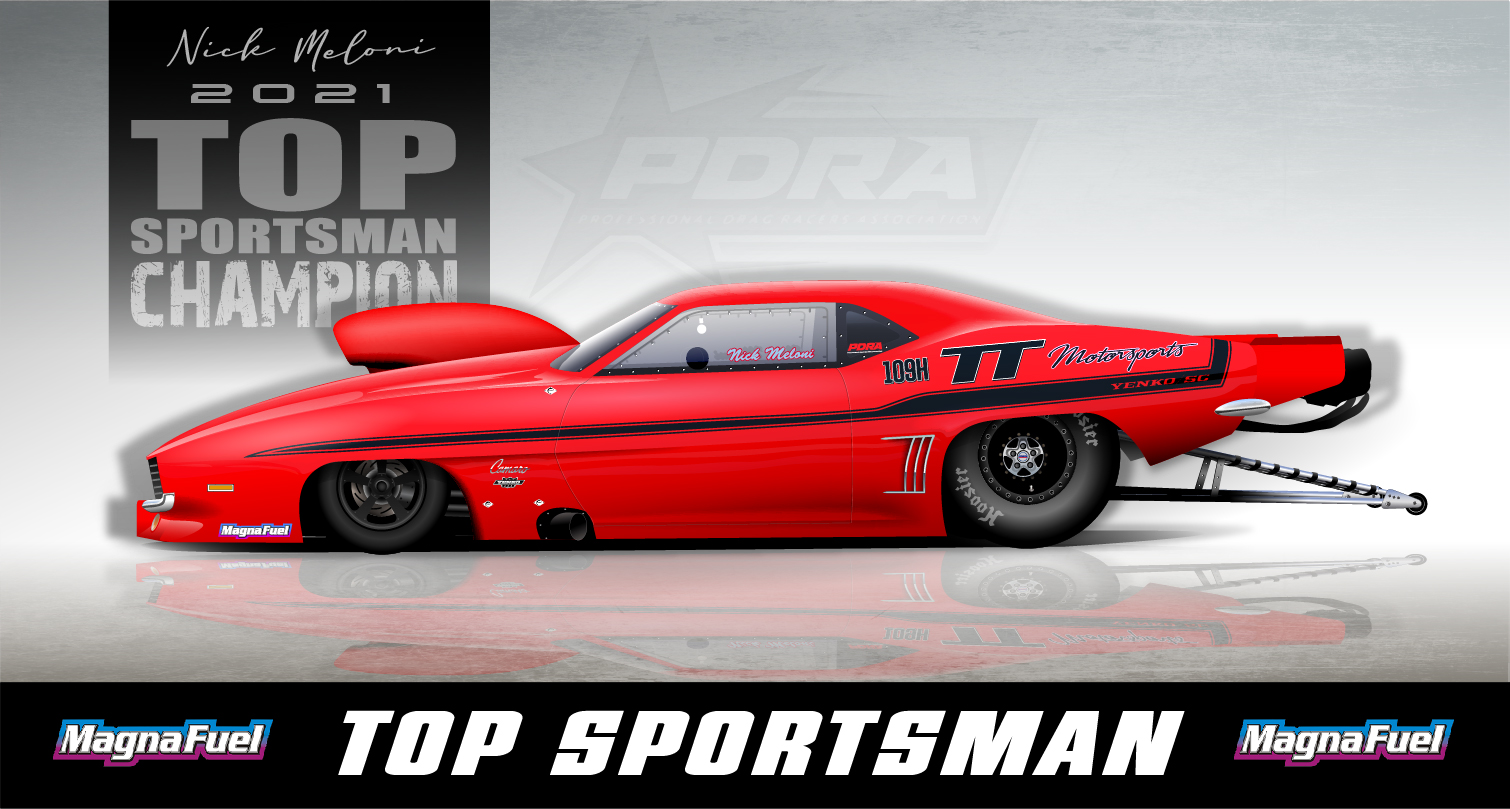 “Honestly, this year was really just a dream year all around,” said Meloni, who ran Top Sportsman in the early 2000s and returned to competition in 2020. “It was one of those years where I had really solid cars. When I needed to be good, I was good, and when I needed to be lucky, I was lucky.”

In Top Sportsman, Meloni drove the Nesbitt-powered TT Motorsports ’69 Camaro to event wins at the DeCerbo Construction American Doorslammer Challenge presented by Callies at Norwalk and the P2 Contracting Northern Nationals presented by P2 Racing at Maple Grove. He added runner-up finishes at the Stroud Safety Doorslammer Derby presented by Classic Graphix in Kentucky and the North vs. South Shootout presented by Line-X in Maryland. He clinched the championship at Proline Racing DragWars presented by Modern Racing at GALOT Motorsports Park.

“I think the biggest key to winning the championship was Norwalk when Stacy Hall went out first round and I went on to win,” Meloni said of his championship battle with the defending world champion. “I think that was probably the key moment in the points chase. He was having a hard time catching me after that point.”

Meloni also notched multiple late-round finishes in his Top Dragster entry to finish second in points behind T.G. Paschal. Fielding two cars could get hectic, especially when Meloni raced deep into eliminations, but he feels that was actually an advantage.

“It gets crazy with the two classes running back to back,” Meloni said. “But I strongly believe sometimes it actually keeps me focused a little more when you’re not thinking about a million little things and all you’re focusing on is getting up there in time and racing. I think that’s a big factor to some of it, believe it or not. It’s a lot of work, but I do like how it keeps my mind focused.”

Meloni received help with it all from his 13-year-old daughter, Ava, who also competes in Coolshirt Systems Pro Jr. Dragster.

“I’d really like to thank my daughter, Ava,” Meloni said. “She was basically my crew chief for the year. She was right there by my side at every race and she’s a big part of all my wins and success.”

Meloni also thanked the Zarella family – Tommy, wife Paula and daughter Tiana – for providing the car and the motivation he needed to pursue the championship.

“I know all [Tommy] really wanted was a world championship,” Meloni said. “I put in the effort to try to give him that and luckily succeeded. I just set my mind to it. Last year was the first year I ran PDRA and I think I finished second in Top Sportsman and fourth in Top Dragster. This year, I just decided I was going to try my hardest. It means the world to me to be able to win my first world championship.”

The PDRA will celebrate Meloni and its other 2021 world champions at the annual PDRA Awards Banquet on Friday, Dec. 10 at the Indianapolis Marriott Downtown.