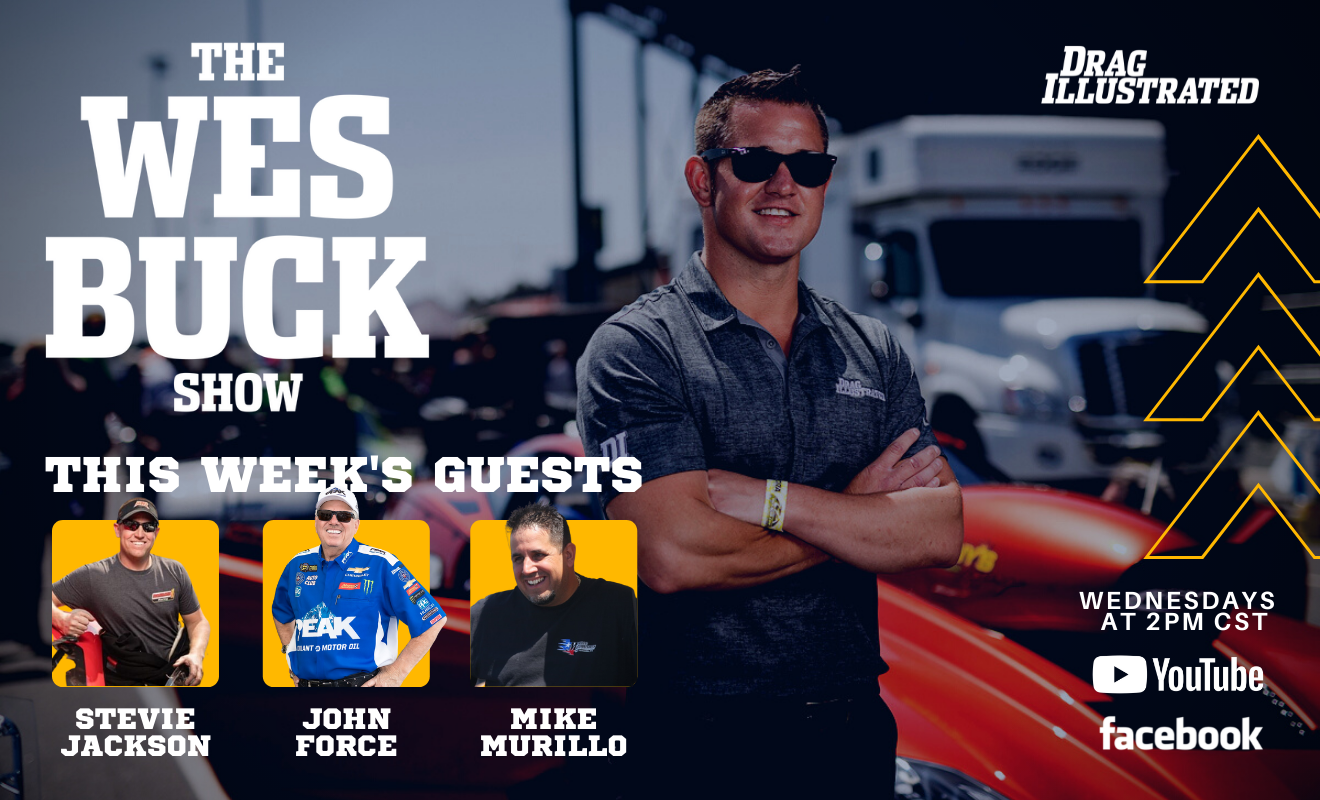 Boasting an impressive guest list of some of the biggest names in the sport, the latest edition of “The Wes Buck Show” promises to be a can’t-miss episode, as legendary Funny Car driver John Force, Pro Mod champ Stevie Jackson and No Prep Kings star Mike Murillo will all join the program.

The show, hosted by Drag Illustrated Founder and Editorial Director Wes Buck, airs live each Wednesday at 2 p.m. CT on Facebook and YouTube, and is also available in podcast form on iTunes. Along with co-hosts Mike Carpenter, the Drag Illustrated COO, and J.T. Hudson, “The Wes Buck Show” explores all things drag racing, featuring interviews with the biggest names in drag racing, technical segments with top-level tuners and crew chiefs and much more.

“We’re really excited to flex our muscles this week on The Wes Buck Show. We’ve prided ourselves on having unparalleled access to the biggest names in racing and there’s no better proof of that than this week’s show with John Force, Stevie Jackson and Mike Murillo,” Buck said. “We’re committed to painting a wide swath and this show represents an opportunity to talk Funny Car racing, but also the NHRA Pro Mod and the No Prep Kings scenes, and everything in between.”

With a recent expansion to a longer weekly show, the program now features lengthier interviews with multiple guests, allowing Buck and company to dive into the hot topics of the sport each week. This week’s episode will feature three major names with a diverse background, with Force laying claim as the sport’s most successful driver with 154 Funny Car wins and 16 world titles.

Jackson is a back-to-back world champ in the NHRA Pro Mod ranks and a fan favorite, while Murillo has enjoyed tremendous success and fanfare in the No Prep ranks, with each star guest offering their own unique perspective of the sport.

“It’s incredible to see The Wes Buck Show reaching new heights each week, and there’s no better proof of that than this superstar lineup of guests,” Carpenter said. “No matter the platform, connecting with our ever-growing audience is the Drag Illustrated team’s top priority. This is just the tip of the iceberg, and we have many exciting things in the pipeline that we can’t wait to unveil this fall.”

“The Wes Buck Show” has been a huge hit since it’s debut, with the weekly program becoming appointment viewing for many drag racing fans. It’s reach continues to grow as well, with a growing YouTube page that features several top segments from each show delivered in highlight form.

“It’s great to see so many segments of our sport doing so well and it’s really exciting to have such three stars from different aspects of the sport on the show” Hudson said. “It shows the diversity of this sport and what we’re building on this show, and we’re thrilled to have the platform to showcase so many unique personalities in drag racing.”