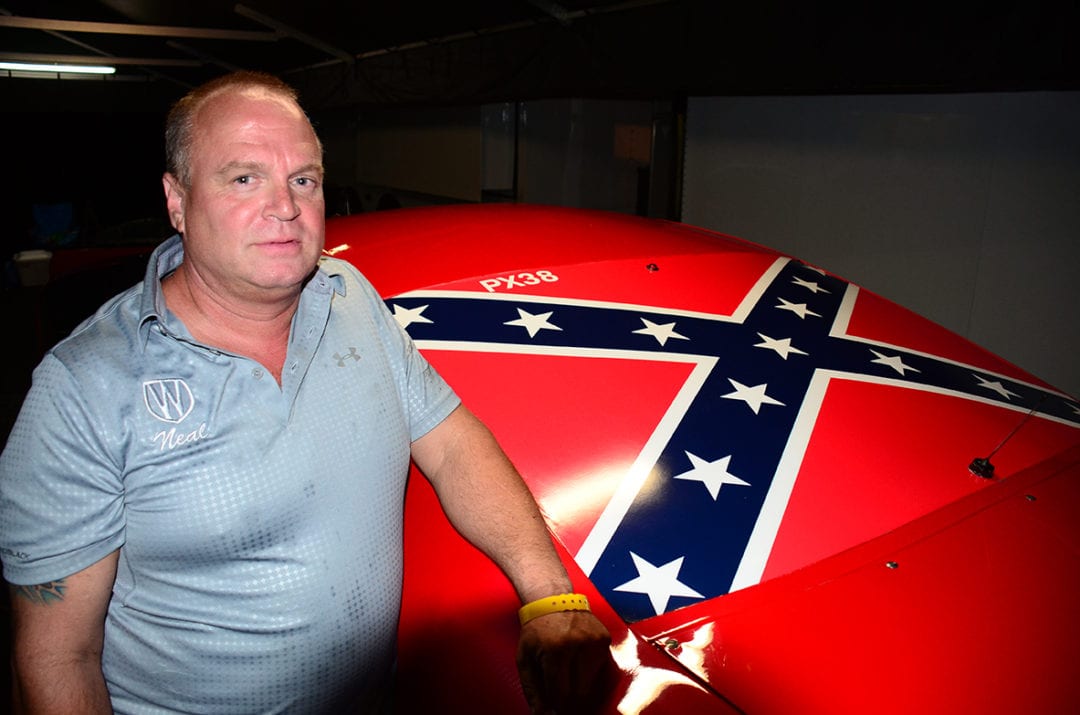 For years a huge image of the Confederate battle flag has covered the rear window of the 2008 Mustang that Neal Ray Wantye campaigns in the PDRA Pro Extreme class–and he sees absolutely nothing wrong with it and has no plans at all to remove it from his race car.

“I love the Confederate flag; it’s a beautiful flag and I like the Southern attitude,” he states. “It ain’t got nothing to do with racism or that kind of stuff that some people want it to be.”

Additionally, Wantye claims that “not once” has anyone ever said anything negative about the inclusion of the Confederate flag on his car.

“Frankly, more black folks come up to me and tell me that they like it and it looks good–because it does look good. I’ve got an American flag on my other car, but I get a lot more comments on this one,” Wantye says as he proudly stands next to his 200-mph ride. “It’s just about a rebel attitude. I mean, isn’t this drag racing more of a rebel thing to start with? So that’s why I do it; I like it.” 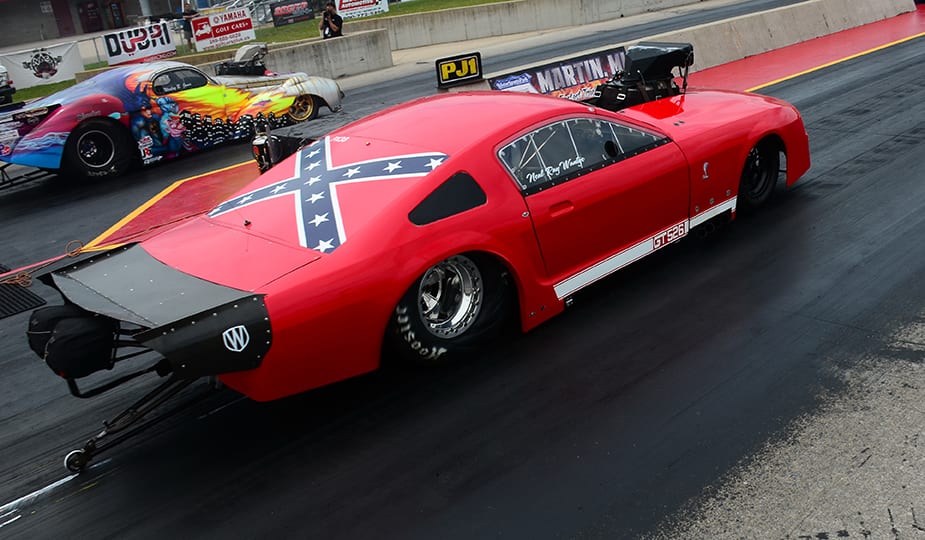 Like almost everyone across the country, Wantye says he was horrified when 21-year-old Dylann Roof of Eastover, South Carolina, allegedly shot nine African-American members of Mother Emanuel African Methodist Episcopal Church–inside the church–June 17, in Charleston, South Carolina. However, despite images surfacing of the self-avowed white supremacist posing with a Confederate flag, Wantye adamantly disagrees with calls to remove it from all official state use nationwide, or with cancellation of Dukes of Hazzard reruns on TV since the star of the show, the “General Lee” Dodge Charger, prominently features the Southern Cross on its roof, or of decisions by major retailers like Wal-Mart, Amazon and eBay to no longer sell Confederate-themed merchandise. Wantye claims each of those measures is misguided.

“What does that kid going and killing them folks in that church got to do with the rebel flag? Just ’cause they saw him standing next to it in a picture?” he asks incredulously. “I mean, that’s ridiculous, but people want to make a big deal out of that. And I’m sorry them folks got killed, that’s just heads-up wrong, but the flag’s got nothing to do with that, nothing at all, it’s about a sense of pride.”

Hailing from Louisville, Kentucky, Wantye acknowledges he grew up like a lot of southerners, learning about the Civil War from a distinctly southern perspective, but he says that shouldn’t discount genuine feelings that the Confederate flag represents a proud heritage–not hate. And he regrets many people adopting what he considers a politically correct position that automatically assumes he’s in the wrong.

“I know a lot of black folks, a lot of white folks, too, they want this flag down, but I’m sorry, it’s a flag of patriotism to a once-was culture. Here’s the whole thing; to me the Southern attitude is different than the north, different than the west. It’s all about people being proud of who they are and where they come from,” Wantye insists.

Still, as a self-described history buff, he can see how the Confederate flag has come to be associated with hate crimes and racism over the years, considering its appropriation by white supremacist organizations like the Ku Klux Klan and racist U.S. politicians such as Georgia Senator Richard Russell or South Carolina’s past governor Strom Thurmond, who wrapped themselves in the stars and bars in the late-1940s through ’60s as rallying cries to so-called Dixiecrats. It reminds him of how the swastika, originally used more than 5,000 years ago in Mid-East and Asian religions and later as a symbol of good fortune in early-20th century Europe, so infamously became representative of the German Third Reich in World War II after Adolph Hitler included it in the Nazi flag. Wantye knows all this, but stresses that any symbol can mean many things to many different people, and those who have more positive associations with the image should not be punished for the transgressions of a misguided few.

“Unlike I think most people, I know they (Nazis) basically hijacked the swastika. But isn’t it just a symbol? Who you are and what you are, it don’t describe you. If you’re wearing the swastika on your arm or on your forehead or whatever, well, that’s your choice. It may not be my choice, but I wouldn’t tell you that you can’t do that,” Wantye says.

“This is America, baby, this is about freedom of speech. Everybody has a right to say what they want. If a guy like Keenya West or whatever his name is, jumps up on stage to take the spotlight from a little ol’ girl that sings country music no one ruins him over that, so what about it, why does it make a difference?

“Each and everybody has their own opinions. It’s like being judgmental over tattoos. Personally I have one tattoo, but I see people who have 50 tattoos. I don’t care. That’s them, I don’t care. But are they judged by that? Yes they are; yes they are. You are going to be judged by what you do and say, but my opinion is, be judged. Don’t be afraid. You’ve got to have a lot of different people to make the world go round.”

And just one pro-level race car flying the rebel flag on every pass down the track, with its driver and owner unafraid of what anyone else might think.