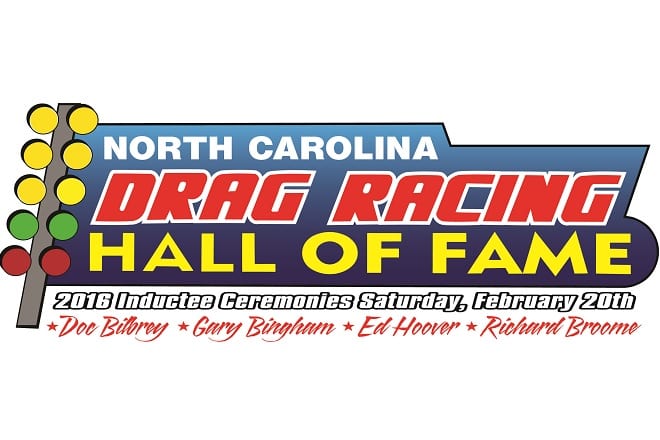 With winter testing underway in Florida and NHRA wrapping up another Winternationals in Pomona, California, all drag racing fans, and racers themselves, know it is time for the 14th annual Shriners Drag Racing & Hot Rod Expo, held each year at the Greensboro Coliseum. Started in 2007, the North Carolina Drag Racing Hall of Fame will introduce its 2016 class of inductees in conjunction with the Expo. With this being the 10th class to be inducted, this year’s class will have a special place in the history of the group that Jim Turner envisioned way back in 2006 as he prepped a select group to nominate and approve the individuals that would forever be known as members of the Hall of Fame.

This year’s group will include veteran racers Doc Bilbrey and Gary Bingham, Pro Mod pioneer Ed Hoover, and veteran crew chief and innovator Richard Broome. Bill Ellis is set to receive the Pioneer Award, with the Jeff Byrd Memorial Lifetime Achievement Award going to Mr. Rick Hendrick. A very special guest will accept the award for Mr. Hendrick as he will be in Daytona with his race teams as they prepare for the Daytona 500, which will be held on Sunday, the day after the festivities in Greensboro.

As always, the Expo will start on Friday, February 19th, and will conclude on Saturday, the 20th, with proceeds going to the Shriners’ Hospital. We hope to see all fans and racers in Greensboro for what is always a very special weekend. For more info, please check out: www.shrinershotrodexpo.com.