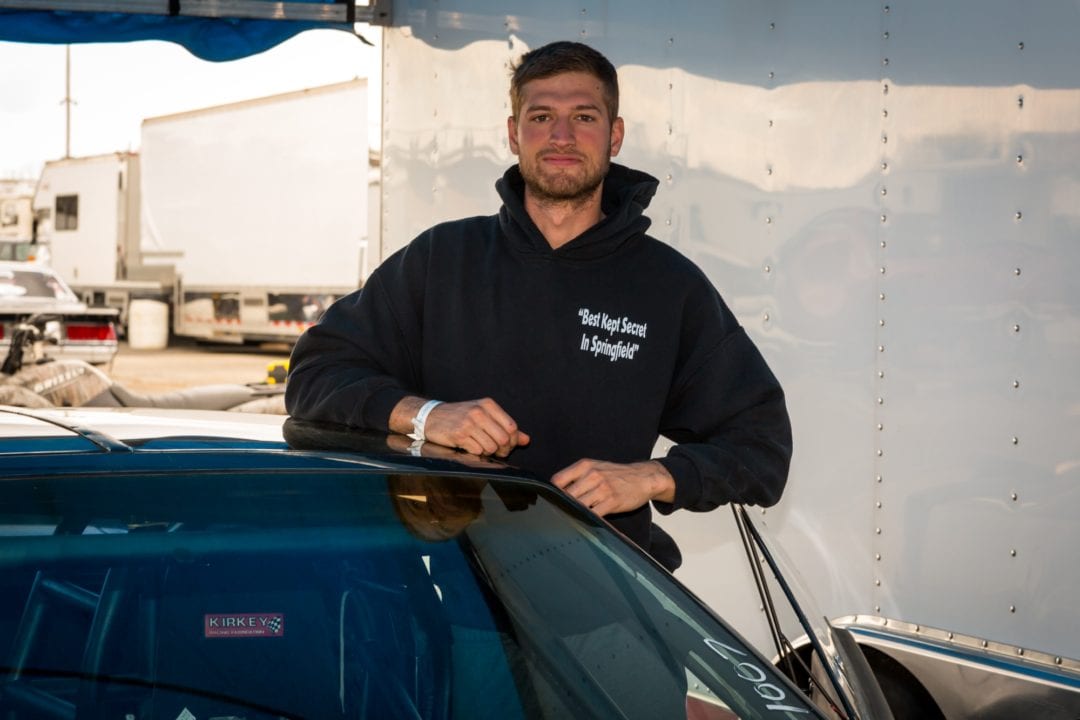 One of the great things about being a long-time fan of motorsports—or of anything, for that matter—is the ability to say, “I remember when he was just a kid running local tracks and now look at him!” I’ve been able to see it in a couple different racing disciplines and it’s possible I’m about to witness another. 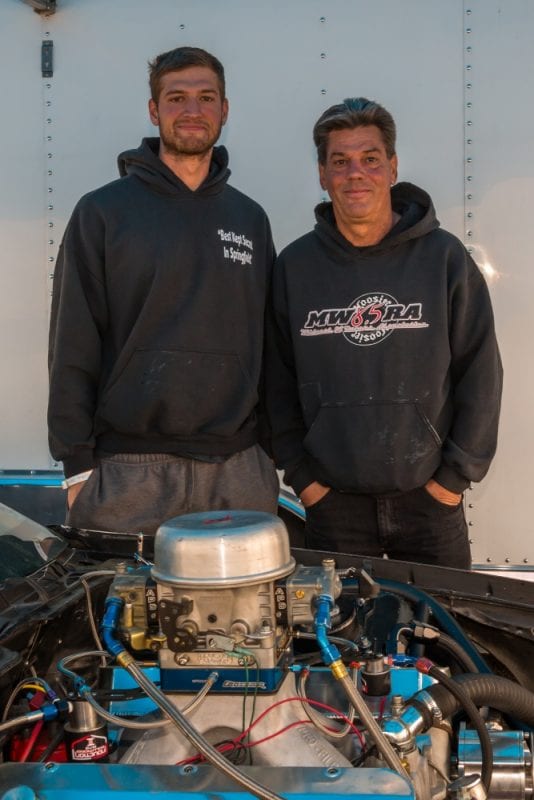 Meet Vincent Franks. A 23-year-old from Northwest Missouri, Franks made an impression on the straight-line world in March when he runner-upped in the MX235 class at Memphis International Raceway’s Outlaw Street Car Reunion IV. His father, Mike, is the owner of US-36 Raceway in Osborn, Missouri. A former racer himself, Mike was justifiably proud of his son.

“He’s pretty competitive in the Outlaw 235 class,” Mike said. “We run him up at Memphis a couple months ago and there was 30 pretty good hot rods there. He does pretty well. He’s a really good boy, I’m really proud of him. He’s a good kid and a pretty savvy racer, too. He’s learning from a lot of people and I’m just really proud of him.”

In no small part due to literally growing up at a drag strip and working with both his dad and grandparents there, Vincent became pretty good. He drove a ’65 Chevelle down US-36’s eighth-mile asphalt track when he was 14 and at 16, was racing the occasional bracket race when he wasn’t working.

But it was around age 19 that Vincent began racing competitively. At the former Kansas City International Raceway, he ran the VAMP series, seeing near-instant improvement. “They had a series called VAMP racing that came up and they had an 8.5 tire limited deal they run,” Vincent said. “I was like ‘Wow, I’d really like to do that,’ so me and Dad started building a car and just kind of (got started) from there.”

While the younger Franks is no doubt a “have race car, will travel” kind of racer, he still calls his home track, well, home.

“I still race in our local series; it’s a lot more restrictive rule set than when I go run Memphis and Tulsa, that MX235 class,” he said. “We started there and slowly started learning from people, because we had never really messed with any power adders like nitrous or anything before, just all-motor stuff and that’s all Dad’s ever done.”

From that point on for Vincent, he absorbed the sport, learning from anyone who could provide him with the information necessary to go just a little faster. “Slowly learned from there. A lot of people helped us along the way and we slowly kept getting faster and faster. In the last year, when we started running the radial stuff, the 235 stuff, at Tulsa and the big radial tracks where they have those huge races. We started getting faster and faster.

“This last year, we went from running low 5s to at Memphis, we made it to the finals in that race which was huge because there were 30 cars there, making a personal best of 4.79. Every year, we just learn a little more and a little more and try some new things out and just kept building.”

The family drag strip has been an obvious benefit for Franks’ development as a race car driver. Mike purchased the land in 1989 after literally selling his house, race car, and boat to obtain the necessary capital, opened the completed facility in August, 1990.

While the addition of new concrete at the starting line a few years ago in addition to plans for more concrete this fall, there have been 27 years of heavy racing laid on that surface. The kind of racing that gives a strip character, makes it tricky.

Vincent said, in no uncertain terms, growing up at US-36 has played an instrumental part in his driving style. “Yeah, you bet! I guess it kind of rounds you out as a driver more. You’re used to really having to tune your car and it’s a little more difficult than at these radial tracks where they put ten barrels of glue down so it makes it a little easier sometimes.

“It’s definitely well rounded me as a driver, as far as that goes. You’ve really got to cut a good light there, so if you do have to pedal, you’ve got a good head start.” 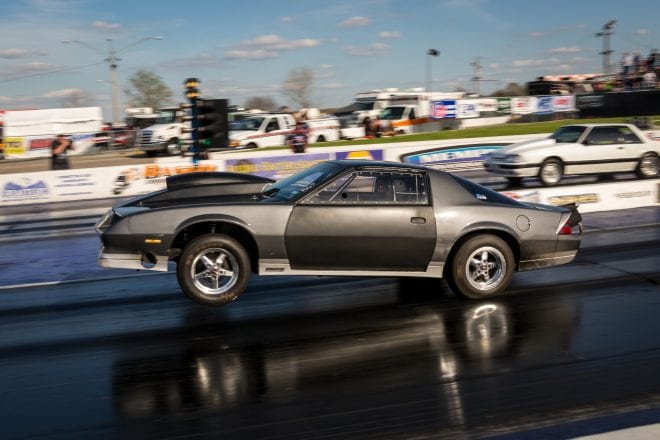 It was also in Osborn where Vincent earned what he calls his most memorable win, last fall’s season finale. Everything that could go wrong prior to the race did, leaving him with a wounded motor and a week to get it fixed.

“I had just,” he said, “two weeks before, went to Tulsa and hurt our other motor, broke a rod in it, and I put together a motor in a week and put it in the car and got it all ready to go and we went down and won the race.”

While hoping to one day race in a national series, Vincent is content where he’s at. He’s a successful 235 racer with tons of potential, a bright young man with a lot of upside. And if all else fails, he’s a heck of a track prepper according to his dad.

“It’s fun at times, but at other times, it can be pretty stressful,” Vincent said of his working relationship with his dad. “We’re definitely a lot alike. We butt heads a lot, if you can imagine that, like a typical father-son deal. It’s really fun. I’ve been blessed to be able to do that and work with him a lot and spend a lot of time with (him). I’ve really enjoyed that since I’ve been able to help him.

“It’s definitely challenging at times, though. We both have our opinions on things and now that I’m older, I do most of the drag strip stuff usually. I’ll get the track ready, do all the track prep, and he’ll just kinda helps when needed and fills in. It’s been fun. Definitely hard at times, though.”

When it comes to the facility that has provided nearly three decades of entertainment for Midwestern race fans and may be in the process of giving us another “Remember that kid…” moment, Mike said his track is more than just a place where cars make laps.

“We’re kinda like the neighborhood bar that everyone loves, you know? Everybody comes and has a really good time.”

This story originally appeared in Drag Illustrated Issue No. 121 in June of 2017.