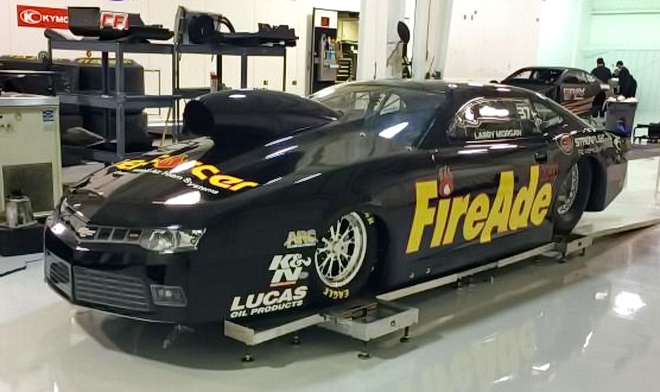 FireAde Chevrolet driver Larry Morgan begins his 29th season in the NHRA Pro Stock class at this weekend’s Circle K NHRA Winternationals at Auto Club Raceway at Pomona, but he’s as excited as ever.

Morgan is switching to Chevrolet for 2015 with a new car from Jerry Haas, and he’ll be getting engines from Gray Motorsports, which powers some of the fastest cars in the class, but what Morgan is most excited about is a partnership with Fire Services Plus and its FireAde brand of products.

“I can’t even say how excited I am because we hooked up with a company that saves lives and is really good for the environment,” Morgan said. “On top of that, I’m going to race a car that has good horsepower. We’ll be getting our engines from Gray Motorsports, and I’ve got a new Chevrolet Camaro from Jerry Haas, too. I’m more excited about thstart of the season than anybody.”

And Morgan has a friendly warning for his Pro Stock competitors.

“You can tell the rest of the Pro Stock guys to stay home!” Morgan said with a laugh. “No, I wish it was that way, but my guys and Johnny Gray’s guys are working real hard on my car and on engines.

FireAde 2000 is the most complete and user-friendly firefighting agent produced in the world, enabling firefighters to thoroughly extinguish fires in an environmentally friendly way.

“Every fireman in the United States should have that on their fire trucks because it works like magic, and when I say that, I’m not kidding you,” Morgan said. “It just puts a noose around fire.”

And Morgan hopes to put a noose around his Pro Stock competitors in 2015.

“I’m looking forward to this year because Gray Motorsports has good power, I’ve got a good car, and I have the best sponsor,” Morgan said. “I can’t wait to get to Pomona.”