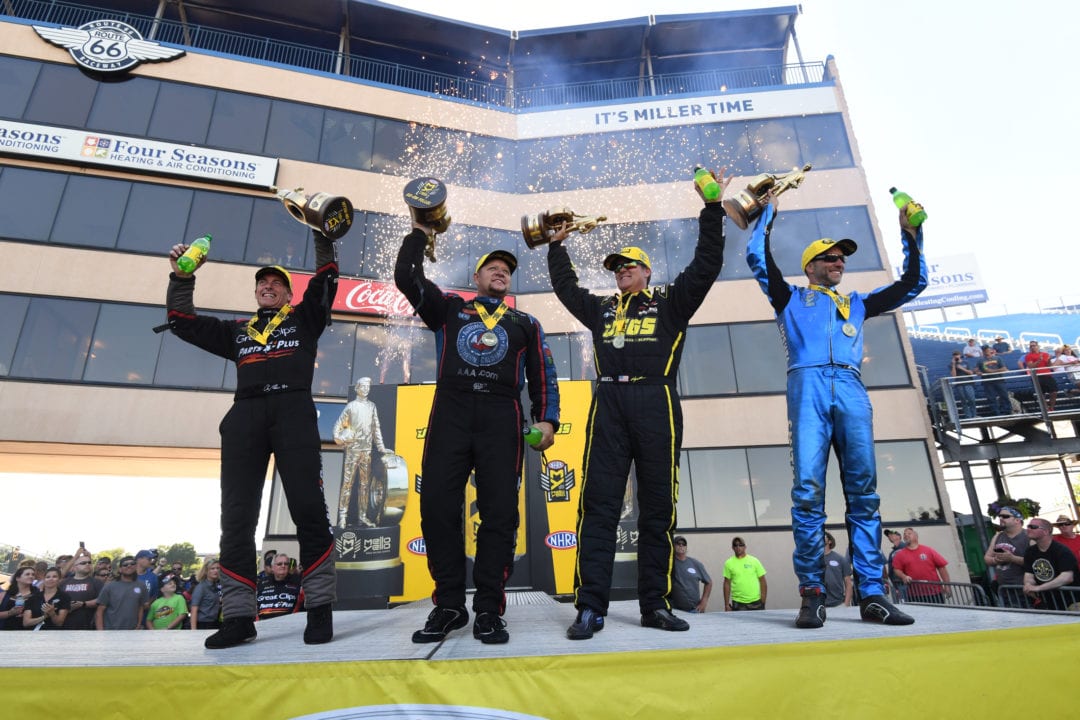 Clay Millican raced to his second straight victory of the season with a win on Sunday at the 21st annual JEGS Route 66 NHRA Nationals at Route 66 Raceway.

Millican piloted his Parts Plus/Great Clips dragster to 3.894-second pass at 289.32 mph to secure his third career win. He defeated Pat Dakin, Scott Palmer, Doug Kalitta and Leah Pritchett in the final round for his first career victory at Route 66 Raceway, the facility where Millican made his first career NHRA Top Fuel start in 1998. 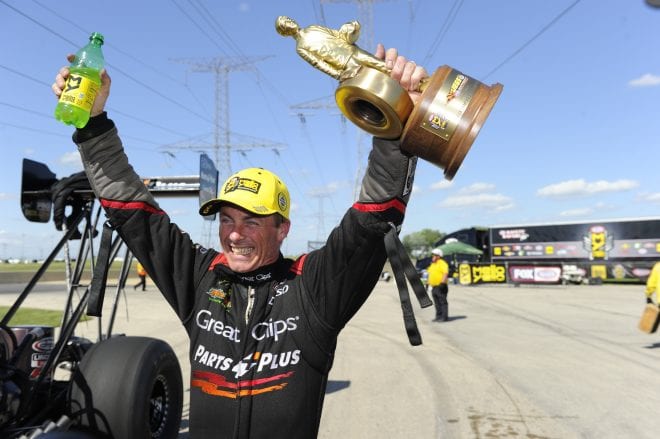 “It took me 19 years to get that first (win), then less than a year to that second one and less than two weeks to get the third,” Millican said. “I like this trend. This place is really special and my team gave me such a good car. It wasn’t necessarily my best weekend, but it was certainly pretty cool to have the team pull together and just keep turning those win lights on.”

With his second straight win, Millican moved to second in points behind No. 1 qualifier Steve Torrence, who was upset in the first round. Pritchett, who beat teammate Antron Brown, Kyle Wurtzel and Blake Anderson, climbed to third in the standings after her second final round appearance of 2018.

Hight, the defending Funny Car world champion, powered his Auto Club Chevrolet Camaro SS to a pass of 4.073 at 310.63 to defeat 2016 world champion Ron Capps in the final round. Hight drove past Cruz Pedregon, points leader Courtney Force and Bob Tasca III to reach his fourth final round of the year. The victory was the first at Route 66 Raceway for Hight, a 42-time event winner. 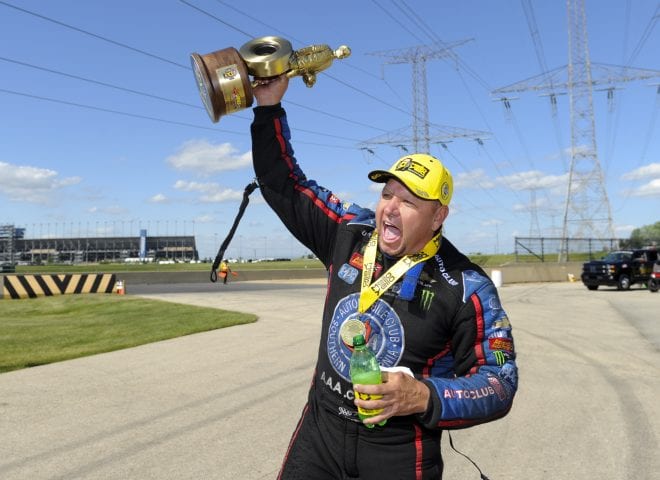 “It was a great weekend,” Hight said. “We qualified 12th, which isn’t where you want to qualify, but when you have a team like this behind you, you never lose faith and you always believe in them. I always thought Chicago might have my number. This is my 14th time here and I had never won this race, but we finally got it done today and that’s big. As a driver, you want to win at every venue you go to, and there’s not a better place than Chicago.”

Capps defeated Jon Schriefer, Shawn Langdon and John Force en route to his first final round of the season and sixth at the facility. Courtney Force maintained her points lead over second-place Jack Beckman, while Hight moved to third.

Pro Stock’s Coughlin grabbed his 59th career victory and first since 2014 after going 6.574 at 210.67 in his JEGS.com/Elite Performance Chevrolet Camaro to beat No. 1 qualifier Greg Anderson in the final round. Coughlin, a five-time world champion, had gone 74 races since his last victory, but earned his sixth career win at Route 66 Raceway, the most for any NHRA driver. 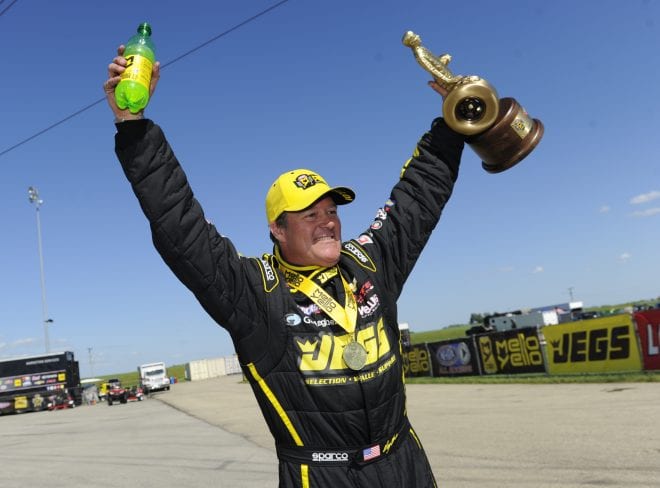 “We’ve been fortunate enough to visit the winner’s circle quite a bit over the years and today is one of those days I won’t forget,” Coughlin said. “We’ve got an unbelievable team with Elite Motorsports and this year we’ve come onto a great stretch. I was aggressive and stayed consistent, my team gave me a great car and we were low E.T. four rounds in a row. I think we did it in grand style to break that ice.”

Coughlin beat Alex Laughlin, Matt Hartford and Tanner Gray to reach the final round. He also jumped to 10th in points, becoming the eighth different winner in Pro Stock through the first nine races of the season. Anderson, who was seeking his first win of 2018, grabbed the points lead over Vincent Nobile with his final-round berth.

In Pro Stock Motorcycle, two-time world champion Smith earned his first victory of 2018 and 19th of his career with a run of 6.816 at 195.87 on his Victory Magnum in the final round. Smith bested Steve Johnson, Jim Underdahl, points leader and No. 1 qualifier Andrew Hines, and LE Tonglet in the final round to lock down his first career victory at Route 66 Raceway. Smith also moved to sixth in the points standings. 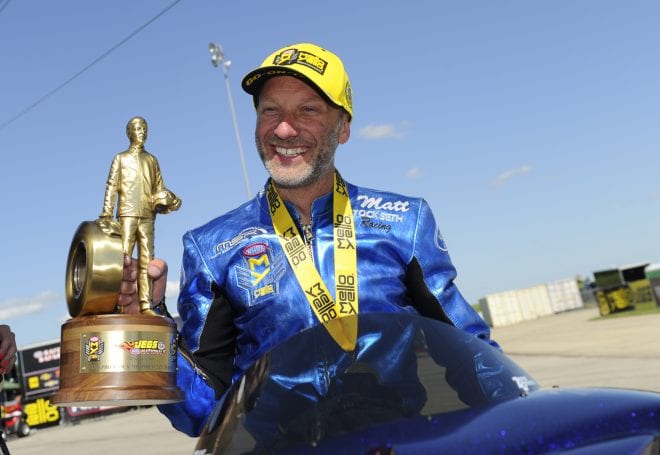 “We always run good here in Chicago and I knew we had a good bike,” Smith said. “We were the quickest bike every round and that’s just a testament to my crew. I’m just very excited. We were just trying to win a race and this was big for us.”