Clay Millican raced to the No. 1 qualifying position in Top Fuel at the NHRA Four-Wide Nationals at zMax Dragway.

Millican, who was the No. 1 qualifier on the circuit’s most recent event in Houston, continued his early season momentum on Friday evening piloting his Parts Plus / Great Clips dragster to a 3.716-second run at 325.77 mph which held up for the No. 1 qualifying position.

“I know every time we show up at the race track we can win,” Millican said. “With this car and this team, every time we go I think we can win the race.  I like my odds tomorrow.  It’s a three-round race and won a lot of three round races; I just haven’t won a fourth. I’m looking forward to it.”

In Funny Car, Force’s track elapsed time record from Friday evening prevailed Saturday for her third No.1 qualifier of the season. She raced her Advance Auto Parts Chevy Camaro to a 3.851 at 323.27, while teammate Robert Hight took second in his Auto Club Chevy Camaro and her father and team owner, John Force, is third with his PEAK Chevy Camaro.

This is John Force Racing’s first one, two, three qualifying order since Topeka 2014. Courtney Force went on to win that race for JFR.

“I’m really excited we’ve been able to keep that No. 1 spot and really proud of my team,” Force stated. “I think it’s awesome that our Chevy Camaro is flying down the race track. I’m really proud of my guys and for this entire Advance Auto Parts team. It’s a really cool feeling to be in the top spot, but obviously our goal tomorrow is going rounds and picking up those points.”

In Pro Stock, Coughlin Jr. has back-to-back No. 1 qualifying positions this season with a run of 6.578 at 210.24 in his JEGS.com / Elite Performance Chevy Camaro. He will line up against John Gaydosh, Drew Skillman and Vincent Nobile.

“The goal today was obviously to try and remain No. 1 in the field and then also finish No.1 in both of the sessions,” Coughlin Jr. stated. “I think this puts us in good position for tomorrow for running this four-wide.”

Two-time world champion Erica Enders qualified second in her Elite Motorsports Chevrolet Camaro with a 6.583 run at 210.08 and will open eliminations against Shane Tucker, rookie Tanner Gray and Alex Laughlin.

Defending Pro Stock Motorcycle world champion Savoie earned his 10th No. 1 qualifier of his career with a run 6.824 at 196.24 on his White Alligator Racing Suzuki from Friday’s qualifying session. He will race against Steve Johnson, LE Tonglet and Scotty Pollacheck in the first round of eliminations.

“I’m pretty confident,” Savoie said. “Tim has a good handle on this thing; this bike is a machine. It is predictable. You make a change; it responds. That is what you want in a racing bike. It’s when you start to take fuel and add fuel it doesn’t respond.” 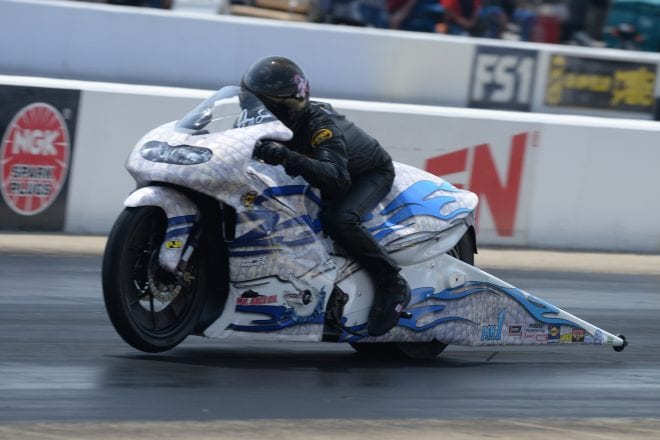 Eddie Kraweic qualified second in his Screamin’ Eagle Vane & Hines Harley-Davidson with a 6.835 run at 196.93 and will open eliminations against Shawn Gann, Hector Arana Jr. and Matt Smith.

First round of eliminations will begin at 12 p.m. on Sunday at the eighth annual NHRA Four-Wide Nationals at zMAX Dragway.