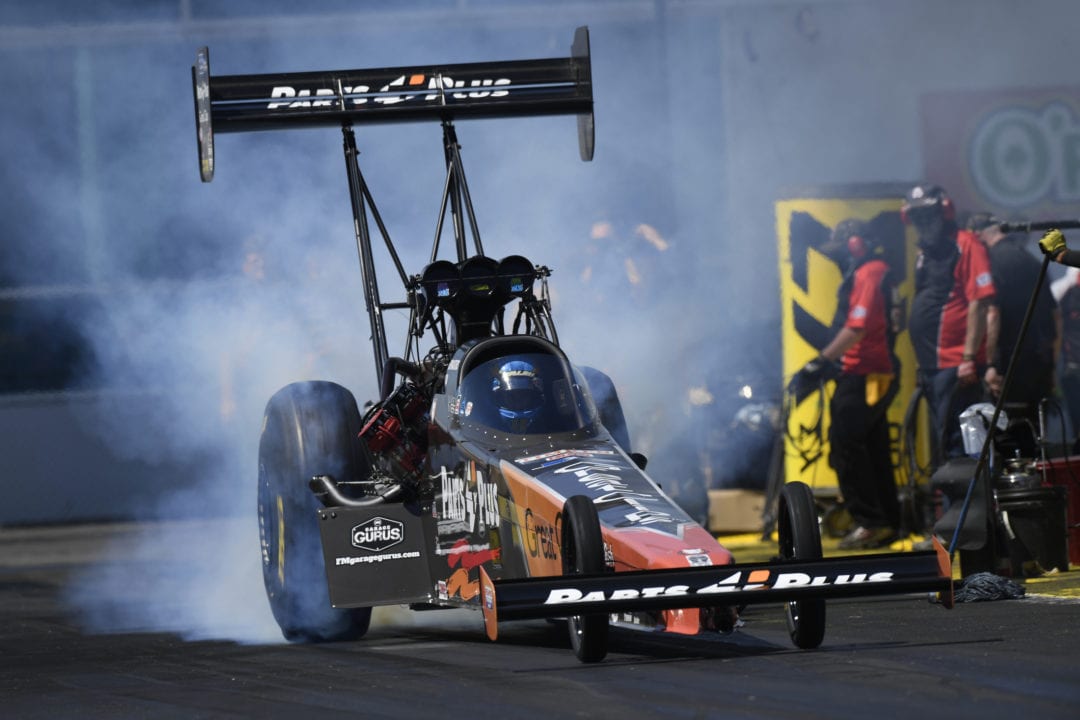 Jack Beckman secured the No. 1 qualifying spot for the Funny Car class Saturday at the 49th annual Amalie Motor Oil NHRA Gatornationals at Gainesville Raceway.
Clay Millican (Top Fuel), Greg Anderson (Pro Stock), and Andrew Hines (Pro Stock Motorcycle) are also No. 1 qualifiers in their respective categories at the third of 24 events on the 2018 NHRA Mello Yello Drag Racing Series schedule.
Beckman raced his Infinite Hero Dodge Charger R/T to a pass of 3.911 seconds at 332.18 mph during the second round of qualifying for the No. 1 position. This is his first No. 1 qualifier of the season, second at this event, and 24th of his career. 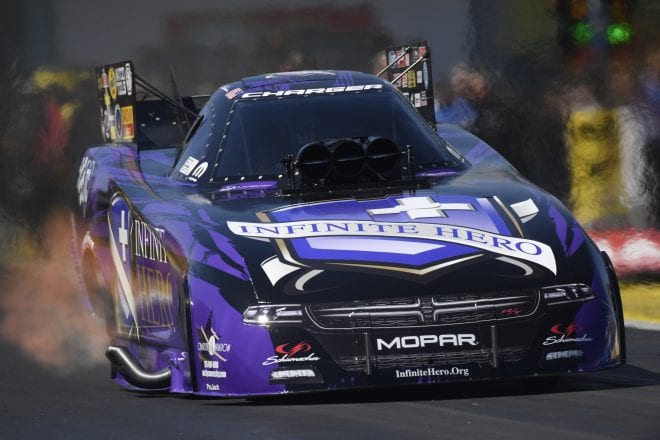 “We didn’t have the best car on Saturday,” Beckman said. “Today’s conditions are going to be a lot more like the conditions we race in tomorrow. We just didn’t give credit to the sunshine out there since this is a warmer track than what we’ve run so far this year.”
Beckman will line up against Jim Campbell in round one of eliminations on Sunday. Courtney Force locked-in the No. 2 spot after a 3.914 at 327.66 in her Advance Auto Parts Chevrolet Camaro. Her teammate and reigning Funny Car world champion Robert Hight is seeded third and will face Dave Richards.
Millican’s second qualifying pass of 3.708 at 324.98 in his Parts Plus/Great Clips dragster stood strong on Saturday for the No. 1 Top Fuel spot. This is his second No. 1 qualifier of the season and 12th of his career. He seeks to secure his first career victory at Gainesville Raceway.
“Tomorrow, we must do better than what we did today,” Millican stated. “We came into the weekend wanting to slow the car down. We’re still not on the consistency train. We don’t want to be that one-hit-wonder. Being hot tomorrow will be interesting for us.”
He will face-off against Terry Totten Sunday morning in the first round. Steve Torrence sits in the No. 2 position with a pass of 3.739 at 323.19 in his Capco Contractors/Torrence Racing dragster and three-time world champion Antron Brown is third.
Anderson, a four-time Pro Stock world champion, remained atop of the field Saturday with his pass of 6.522 at 213.00 in his Summit Racing Equipment Chevrolet Camaro from the second qualifying session on Friday. He seeks to secure his fifth victory at Gainesville and 91st of his career.

“A little bit tougher today,” Anderson said. “This is still a great tune-up for tomorrow though. We think the weather is going to be exactly like this tomorrow. We made four really nice runs and that’s probably the best its been all year.”
Anderson will race Wally Stroupe in the first round of eliminations. Alex Laughlin powered his Gas Monkey Energy Chevrolet Camaro to the No. 2 spot with his pass of 6.525 at 212.26 and Chris McGaha qualified third overall.
In Pro Stock Motorcycle, Hines raced to the top of the two-wheeled category during the fourth qualifying round with his pass of 6.773 at 198.64 on his Screamin’ Eagle Vance & Hines Harley-Davidson. His last victory at Gainesville was in 2004 and was the runner-up in 2017.

“Last year we figured out how to get our Street Rods off the starting line a lot more consistently,” Hines stated. “Coming here it was just a progression of taking our notes from last year and just making sure we are making the proper calls at the right time.”
The Amalie Motor Oil NHRA Gatornationals first round of eliminations begins at 11 a.m. on Sunday at Gainesville Raceway.