Last year Holley EFI announced a special bonus program for the NMCA Factory Super Cars category that rewarded the first group of racers that ran in the 7s. It was dubbed the Holley EFI 7-Second Club. The first racer to crack the magical seven-second barrier would receive $5,000 from Holley EFI, and the next four earned $1,000 in Holley product certificates. If the first racer that broke into the elusive seven-second zone was also running Holley EFI, he could pocket another $5,000 bonus. Aside from the $10,000 payday for the barrier breaker and the $1,000 product certificates for the next four through the seven-second door, all five drivers were to receive Holley EFI 7-Second Club jackets to commemorate their achievement.

“We at Holley are proud to be part of the events that are continuing to unfold on the NMCA Holley EFI Factory Super Cars class. When presented with the opportunity several years ago to be the title sponsor, we jumped at it. Holley EFI is a fixture on the majority of the NMCA Factory Super Cars class entries and is the standard equipment on the Chevrolet Performance COPO Camaro and Dodge // Mopar Challenger Drag Pak programs,” Robin Lawrence, Director of Motorsports at Holley Performance Products, said.

Geoff Turk was awarded the first Holley EFI 7-Second Club membership spot in 2018 during the opening round of qualifying for the NMCA Muscle Car Mayhem event at Bradenton Motorsports Park. Since that time, several racers have come close, but failed to pierce the 7s during an NMCA race. That all changed with the 2019 season-opener when a fleet of Cobra Jets and COPOs crushed the barrier.

“We are proud to have hosted the Holley EFI 7-Second Club and we knew going into the event that the first round of qualifying was going to be legendary. These cars are the hottest segment in drag racing and very special to the NMCA community,” said Rollie Miller, General Manager and National Event Director for the NMCA Muscle Car Nationals.

Chuck Watson Sr. kicked things off in qualifying and earned the second seat in the club. Leonard Libersher, Scott Libersher, and Carl Tasca filled the next three seats.

“When Ford Performance’s Mike Delehanty suggested that Holley would be the ideal backer of a 7-second club for the Factory Super Cars class, we were all in,” Lawrence added. “From Geoff Turk’s 7-second passes and a championship in 2018, the excitement was growing. It would be a year before any other 7-second passes were run in the NMCA. With the recent blower changes in the 2019 rules package everyone knew Bradenton was going to be the place to be to see history being made. We are excited to close the book on the final entries into the Holley EFI 7-Second Club. Hats off to all the impressive Holley EFI Factory Supercar Racers and congratulations to the four new members of the Holley EFI 7-second Club.” 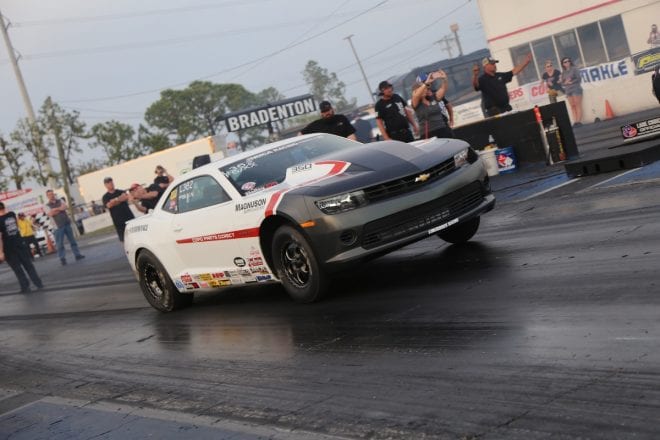