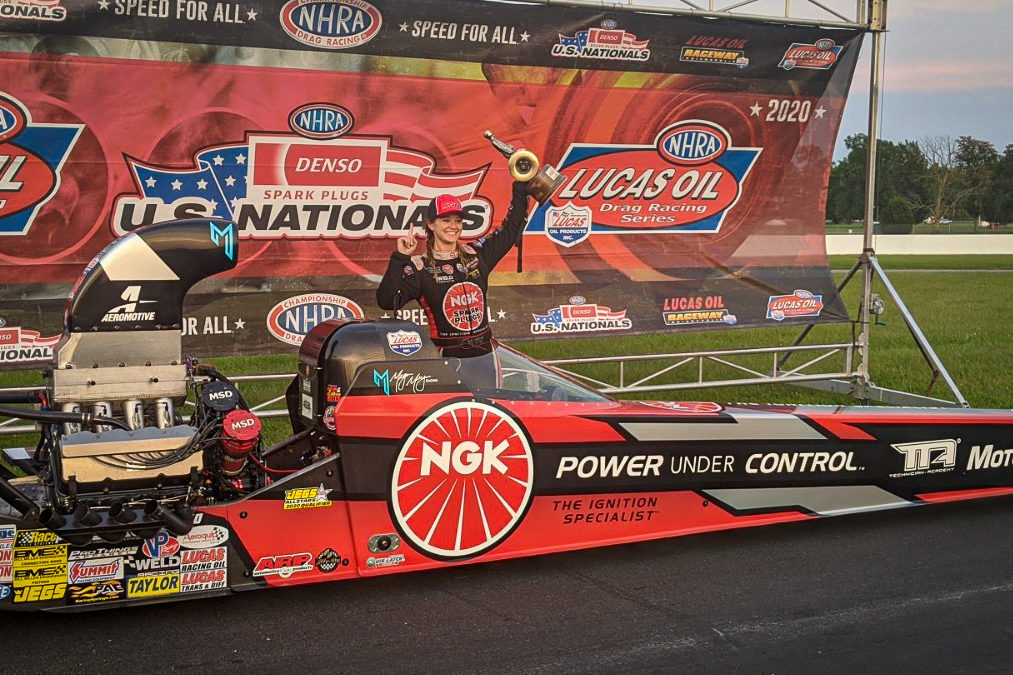 Usually contested at the Chicago national, the 2020 JEGS Allstars event was ran on Friday of the U.S. Nationals. In the first round, sisters Megan and Rachel Meyer in their NGK Spark Plugs dragsters staged up against each other as dad Randy stood between the two cars as the tree dropped. Rachel had an impressive .022-second reaction time and drove her dragster to the win with a 5.279, 271.57. Megan experienced fuel issues as soon as she stomped on the gas and coasted to a 16.832, 44.31. Julie Nataas clocked in with a troubled 15.811, 43.75 with backing from local Indiana companies Huntingburg Machine Works and Thieman Realty, in her first round pairing as Jackie Fricke’s 5.234, 276.13 advanced to the second round. 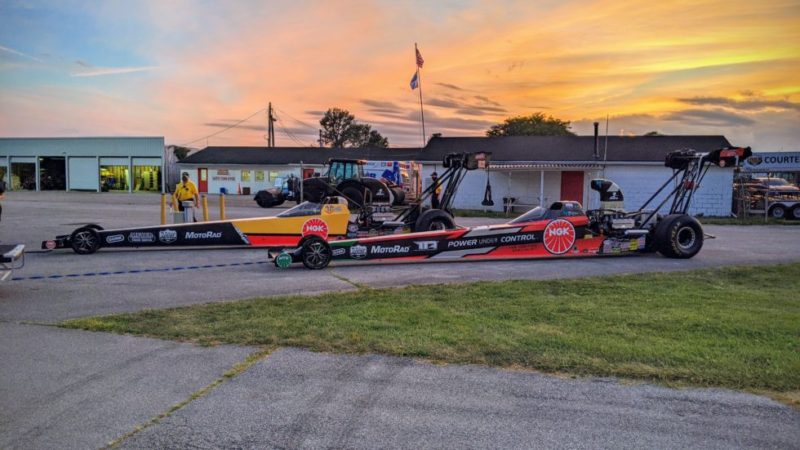 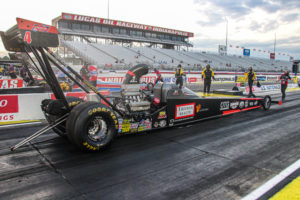 For the first round of the main event, Randy Meyer Racing once again had a teammate matchup between Julie Nataas and Rachel Meyer. Rachel crossed the finish line with a 5.295, 269.03 but Julie bettered that performance with a winning 5.235, 272.56. Notably, Megan had one of the most intense rounds of racing of her career as she had a pedal fest with Joey Severance in the first round. Both competitors had trouble putting their power to the racetrack and it was a battle to get to the finish line first. At the stripe, Megan’s 5.574, 274.66 edged out Severance’s 5.594, 265.80.

The second round of eliminations was held late at night at Lucas Oil Raceway and track conditions were in prime condition. Julie’s competition, Matthew Cummings, broke before he was able to stage and she cruised right down the boulevard with a 5.215, 270.86 to advance to the next round. Megan shattered the Top Alcohol Dragster world record when she lit the scoreboards on fire with a 5.097, 278.81 and took out Friday night’s Jegs Allstar champion Jackie Fricke, who ran a 5.190, 278.35. The previous record was a 5.10 pass posted in 2007 by Bill Reichert.

“That run was incredible,” Megan said. “I had no idea we ran that quick for the win until the team drove up to the top end with the time slip. It was a pretty smooth pass and I didn’t feel any cylinders go out, so I figured it was a 5-teen or 5-20 pass. When they told me it was a 5.09 I didn’t believe them at first! I had to look at the time slip for proof to see that big fat zero next to the 5. We had a great time celebrating the run Saturday night, and the fact that we were able to repeat, and beat, the time in the semi-finals shows how much time and hard work this team has put into this car to make it the best of the best. I’m honored to have my name in the drag racing history book next to Bill Reichert – he is a racing legend and it’s humbling to continue the strides he has made in the sport.”

Showing her record-setting run from the previous night was no fluke, Megan lowered her national elapsed time record with the quickest pass in Top Alcohol Dragster history with a 5.090, 280.54 and used an impressive .017 light as an added bonus for the victory over Shawn Cowie. For the finals, Megan came into the round with a win-loss record of 3 – 2 against Hart in prior events. Hart got the starting line advantage at the beginning of the race, but Megan showed the pure horsepower of the Randy Meyer-tuned team by crossing the finish line first with a 5.148, 271.13. 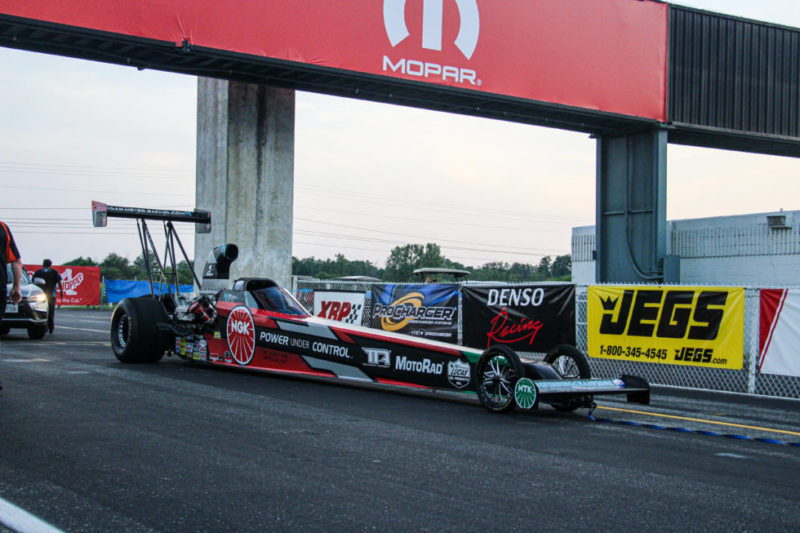 “We would like to thank Shawn Collins and his team at Technician.Academy for bringing two college interns to work with the crew this weekend,” Megan said. “We needed all the hands we could get in the pits, and our interns, Michael and Connor, did an excellent job for their first time. This is the fourth year in a row that we’ve hosted automotive college interns at the U.S. Nationals, and each year we are very pleased with their work ethic and willingness to learn. We like to stay in touch with our previous interns and their families and are happy to hear that each of them have moved on to have a professional career in the automotive industry with the experience they learned from working with the Randy Meyer Racing Team. We encourage other teams and brands to create similar programs to help expand the reach of automotive and motorsports, and bring in more interest to our sport by reaching out to younger generations. We are thankful for MotoRad continuing their support with us and seeing the growth of this educational program.”

Megan and Julie will compete next in Earlville, Iowa for the team’s fifth and final Lucas Oil Drag Racing Series Central regional event, held at Tri-State Raceway this weekend.