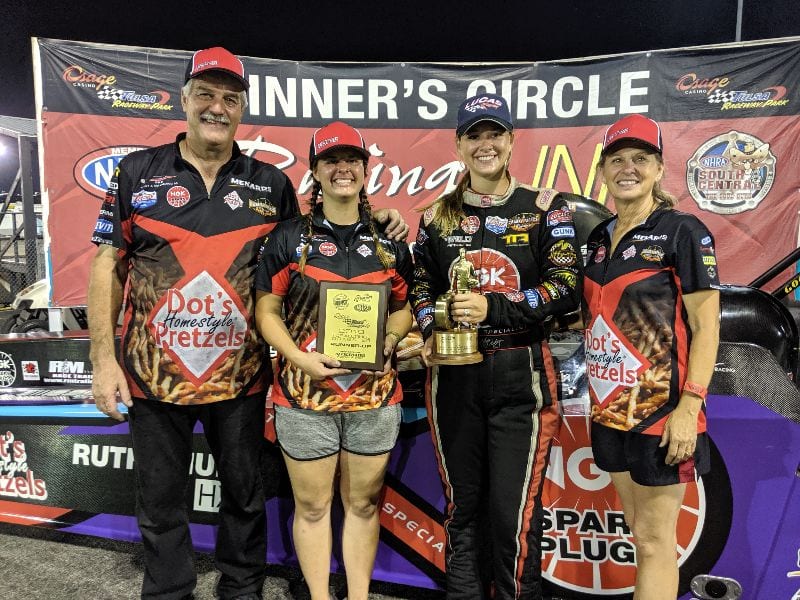 She drove her NGK Spark Plugs/Lucas Oil A/Fuel dragster to the top qualifying spot with a 5.26 ET at 275 mph. Due to rainy weather, and a low car count, the Top Alcohol classes lost their second qualifying session, and had only one session to set the field. Megan’s sister, Rachel Meyer, driving the Dot’s Homestyle Pretzels/Menards Racing nitro-powered dragster, qualified right behind her with a 5.28.

Rachel went on to have a single in the opening round of eliminations as Jared Dreher wasn’t able to make the show due to a broken six-shooter, and she was guaranteed a spot in the final round. Megan ran a 5.27 to take down Terry Schmidt to meet her sister in the finals, an exact repeat of the race last year where the double-trouble duo met for the first time against each other in their Top Alcohol Dragsters. Megan was the winner that night, and again dominated this year to take the win with a consistent 5.26 ET at 275 mph.

“I went into this weekend knowing that I had to win the race to count towards the National championship that we are chasing, but I did not realize that we could clinch the Regional championship as well,” said Megan. “I’ve stayed away from looking at the standings this year as much as possible, I just want to go out there and race and not worry about how many points each driver has and constantly think ‘what if’ all the time. I’ve been on my a-game at every race this year, and the results speak for themselves. Thankfully I have an amazing group of guys, and girls, that have my back and give me the best race car to drive so we can come out on top at the end of every race.”

This is the Randy Meyer Racing Team’s 10th win of the year in 17 events between their five drivers who have visited the final round at 16 of those races.

“We will be racing in the NHRA and Lucas Oil Series more than any other team out there, and we are the most successful,” Megan claims. “2019 is our 40th year of drag racing as a team, and it is our best year yet. We have the best group of drivers right now and we couldn’t be happier with the results we get every race weekend. We also have the best group of crew guys on our team, and have had new help come on to the team without any struggles. We have a systematized routine and we are extremely efficient between rounds while operating two cars under the same tent. My dad and Adrian have worked very hard to get us to this point, and their dedication and efforts show on and off the track. NGK Spark Plugs, Lucas Oil, Menards Racing, Dot’s Pretzels, Gunk, Technician.Academy, Weld Wheels, ARP, Aeroquip, Aeromotive, and all of our other sponsors see how hard we work, and we are extremely grateful to have their support and to promote their brands with a winning team.

“I’m looking forward to carrying our momentum and consistency into Brainerd and I would love to finally get the chance to win the Lucas Oil Nationals. We will be going fishing before the race, which is my favorite activity to do outside of racing, and even if we don’t catch anything, it will still be a blast to be outdoors and get in the right mindset before the race.”

Megan has five NHRA National events left on her 2019 schedule, running at Brainerd, MN, Indianapolis, IN, Reading, PA, Charlotte, NC, and Dallas, TX. The Randy Meyer Racing Team will be competing at 11 more events to finish up their season.