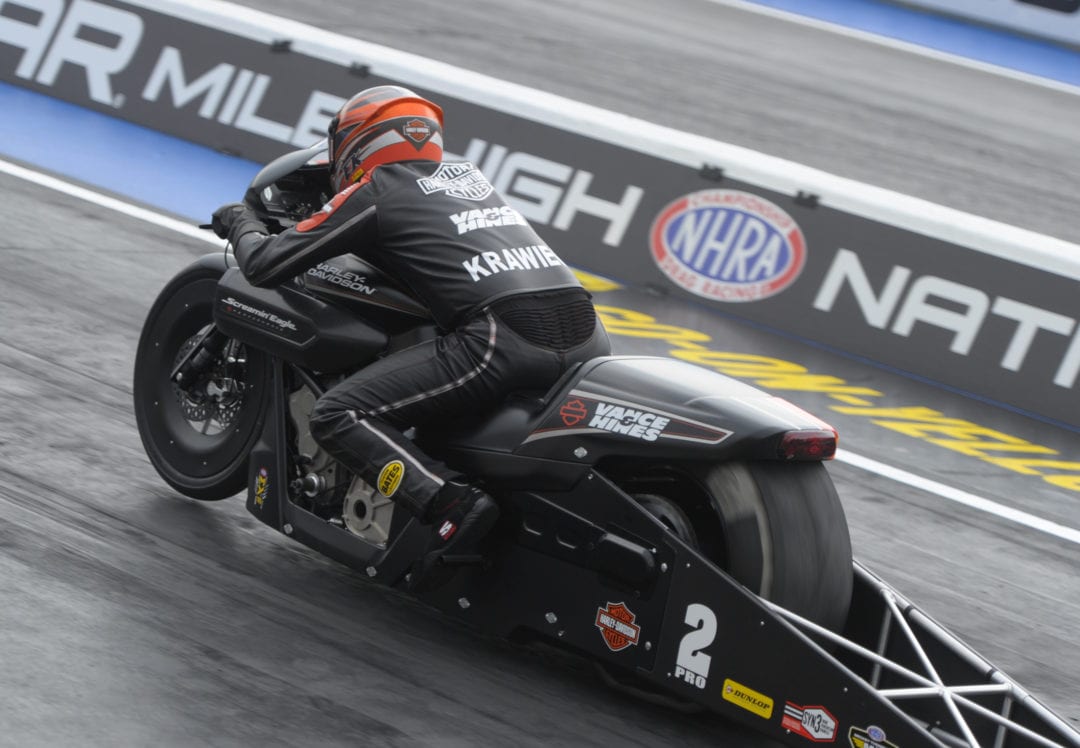 It was a thrilling weekend in Denver for Pro Stock Motorcycle standout Eddie Krawiec, who won his second event of the 2017 NHRA Mello Yello Drag Racing Series season. But beyond the victory on his Screamin’ Eagle Vance & Hines Harley-Davidson, qualifying No. 1 also ensured he kept the points lead for the Mickey Thompson Tires Pro Bike Battle.

The race within in a race for eight top Pro Stock Motorcycle riders takes place June 29, as part of this weekend’s 30th annual Toyota NHRA Sonoma Nationals at Sonoma Raceway, with the winner earning $10,000. Keeping the No. 1 spot was a big priority for Krawiec, who immediately mentioned why he was so excited to qualify No. 1 in Denver.

“The NHRA Mickey Thompson Tires Pro Bike battle – I didn’t want to lose (the points lead for it),” Krawiec said. “Jerry (Savoie) and LE (Tonglet) have been grabbing up those points left and right, so it was good for me to maintain and move forward, and the same for Andrew (Hines).”

As the top seed, Krawiec will match up with Chip Ellis in the opening round.

For Arana, he knows he has a big first-round challenge with Savoie, but he’s excited for the opportunity as well as Mickey Thompson Tires getting involved in the exciting race within a race.

“It’s our all-star race, the best of the best racing for big money,” Arana said. “It’s huge to be involved and even bigger to win it all. Mickey Thompson stepping up as title sponsors is huge. They are the people that make these awesome tires that allow us to go as fast as we do so they’re everything to us. I would love to win the Battle and then double-up and win the race the next day.”

That’s what Krawiec did in 2015, winning in Denver and then sweeping the weekend in Sonoma. With the Pro Stock Motorcycle category not racing in Seattle, doing that is their version of sweeping the Western Swing, something Krawiec would certainly like to repeat in 2017. The team made big strides on the Street Rods he and Hines debuted a short time ago in Denver, but excelling in the fast conditions at Sonoma Raceway against a field of star riders will be difficult.

“There’s no easy bikes, especially going into that battle,” said Krawiec, who is currently second in points. “To be quite honest, we haven’t run like we should at sea level yet. Hopefully what we’re learning (in Denver) translates down there (in Sonoma). It’s a huge difference going from Denver, a mile high, to going somewhere that can actually be negative altitude. We’ll do our homework and we’re going to really have to keep after it.”