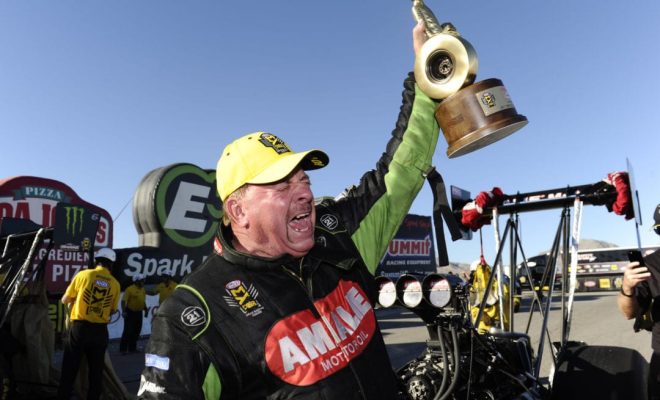 After 19 years together, Terry McMillen Racing and the AMALIEⓇ Motor Oil company have mutually agreed to suspend their sponsorship relationship. Amalie Oil has suspended all motorsports sponsorships effective immediately. The move comes as the 2020 NHRA Mello Yello Drag Racing Series, now Camping World Drag Racing Series, wraps up with three final races in Dallas, Houston and Las Vegas. McMillen informed his racing team of the decision this week and he will be evaluating the future direction of the organization in the coming weeks.

“I can’t thank Amalie Motor Oil enough for the support they have shown me over the past 19 years,” said McMillen, the 2018 U.S. Nationals Top Fuel national event winner. “It is not a cliché, this company was part of my family. They stuck by us as long as they could and we are agreeing to suspend this sponsorship with no hard feelings. They have gone above and beyond to be fair with my team financially. We just reached a point where it didn’t make good business sense for either of us to move forward. They are a great company and I can’t say enough nice things about how they have treated me and this team over the years. Starting today we are exploring new opportunities. Right now it is key to keep Amalie employees working and making product so when the economy turns around they will be ready.”

The move was directly related to the ongoing COVID-19 pandemic and its effect on the global economy. According to a research study conducted by consultant KPMG International, working from home and online shopping have become the new normal and will reduce driving in the U.S. by up to 270 billion miles a year. Additionally, 64 percent of Americans who are not driving said they’re working from home, which equates to 259 billion miles not being driven over the course of a year, dramatically reducing motor oil sales. Moving forward, KPMG is predicting as much as a 10% permanent reduction in the nearly three trillion miles typically traveled every year which has already and will continue to adversely affect the motor oil business and automotive industry as a whole.

“I certainly understand why this happened and I remain very hopeful that we will be back sometime next year,” said McMillen, a two-time national event winner. “My crew chief Rob Wendland and my entire team have done an amazing job giving us a car that can compete with anybody on any given day. Anyone that has followed my racing career has seen the struggles I have had over the years. What Rob has done to turn things around is something that I will never take for granted. Rob, his family, and my entire team mean the world to me. This certainly is a setback, but I am not going to say it’s the end.”

“Amalie has supported us through the good, the bad and certainly the ugly. When other teams were laying off their crew during the height of the pandemic, Amalie made sure that I was able to keep my team intact and employed. I know that this decision was extremely painful for Amalie, as it is for me, but I look forward to what the future has to offer, and I won’t give up hope that I will be back on the track in a competitive fashion again one day.”

Terry McMillen Racing based in Elkhart, Ind., is a Top Fuel drag racing team competing in the NHRA (National Hot Rod Association) Mello Yello Drag Racing Series. The team was founded in 2007 and has shown remarkable determination and dedication. McMillen won the prestigious Chevrolet Performance U.S. Nationals in 2018 and has qualified for the NHRA Countdown, the end of season playoffs, in 2017 and 2018. Throughout his career with longtime sponsor AMALIE® Motor Oil McMillen has raced to eight final rounds including a career best five finals in 2018.