In a matter of 6.460 seconds on Saturday at Orlando Speed World Dragway, Matt Hartford’s 2020 Pro Stock season took a major step forward and gave him a spot in the Pro Stock records books in the process.

During the final qualifying session of the inaugural Drag Illustrated World Doorslammer Nationals presented by CTech Manufacturing, Hartford and Aaron Stanfield thrilled the crowd with a pair of 6.46s in the quickest side-by-side run of the electronic fuel injection (EFI) era in Pro Stock. But it was Hartford who claimed the top spot in his Total Seal Camaro, powering to an incredible 6.460 at 211.89 mph, giving him the No. 1 qualifier, the quickest run in the EFI era of Pro Stock – and the third-quickest run ever in Pro Stock, behind only Jason Line’s 6.455 and Greg Anderson’s 6.457 with carburetors in 2015.

“The neat thing about it is it’s the third-quickest run in NHRA history out of a 500-inch car,” Hartford said. “That means a lot to us. I knew it was a good run. Sitting in the lanes, I could feel the temperature drop. I came back and grabbed the laptop, and made some changes before the run just feeling how quick it was turning. I was ecstatic. To put the Total Seal Camaro in the No. 1 position in qualifying, it’s a dream come true.”

It was a surreal final session to close out two spectacular days of qualifying in Orlando, setting the stage for eliminations on Sunday where $75,000 will go to the winner in the largest single-race payout in Pro Stock history.

In front of a huge crowd on Saturday, Hartford delivered the biggest run of all, putting him in prime position to win the payout against all the heavy-hitters in Pro Stock. Stanfield’s career-best 6.467 at 212.43 in his Janac Brothers Racing Camaro was second best, while his Elite Motorsports teammate, defending Pro Stock world champion Erica Enders, was a spot behind with a blistering 6.468 at 213.64 in her Melling Performance/O.PenVAPE/Elite Motorsports Camaro.

Greg Anderson, who made the quickest run the night prior, was fourth thanks to a strong 6.470 at 213.37 in his Summit Racing Equipment Camaro, while Deric Kramer rounded out the top five with a 6.472 at 212.16 in his American Ethanol Camaro.

Eliminations begin at 11 a.m. on Sunday, with first-round matchups being determined by a drawing at 10:30 a.m.

Hartford will get first pick after his gargantuan run, turning around a season that had been a struggle through the first two NHRA races of the season.

The veteran made a swift improvement on Saturday, going 6.482 at 212.39 to open the day. He added to that to end the memorable day, putting him in a terrific spot for eliminations. But Hartford knows he’ll have to stay on that level if he wants to head home with $75,000.

“We’re gunning for that $75,000 tomorrow,” Hartford said. “You’ve got the best of best out here, and there’s nobody backing down. You better be on your game, you better get your left foot off the clutch on time, and you better not miss your shift points. The team that makes the least amount of mistakes will win tomorrow.” 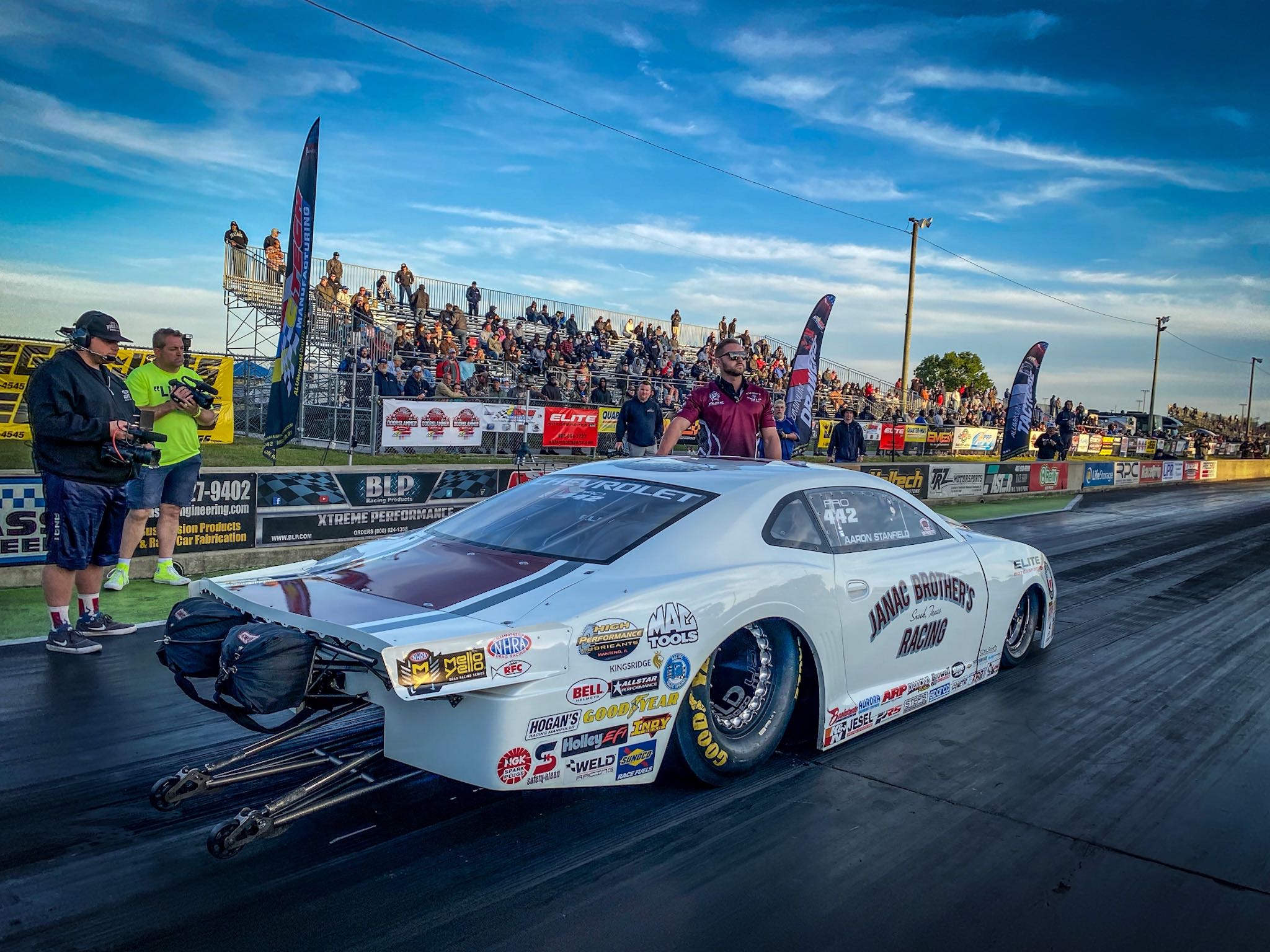 Stanfield was just as elated after a side-by-side pass he’ll remember for a long time. It brought the crowd to their feet, while Stanfield was sure to celebrate on the top end after hearing the numbers from crew chief Brian “Lump” Self.

“I never thought we would be running this fast,” Stanfield said. “Lump has done an unbelievable job on this car and I’m just very happy right now. It’s not just this race, but in Pomona and Phoenix we’ve shown some really good potential. Everything is really starting to come together for this team. These guys are very serious and they work really hard, and I’m finding my place in the driver’s seat.”

This weekend was another example of that, as Stanfield went 6.499 to open qualifying on Friday. He improved to 6.483 at 211.10 to start qualifying today, adding another spectacular run to close out the day. It’s given the team more than enough evidence that they can win on Sunday.

“The guys have found some power and Lump has just been great at figuring out the car,” Stanfield said. “That was very, very cool. All my guys were excited. Everybody that has had anything to do with this event has done an unbelievable job. This is something we need more of. I think it helps attract more people to the class.”

Enders also praised the event that has drawn rave reviews at every turn. She reveled in the electric atmosphere, delivering two of the quickest runs of the event, also blasting to an event-best speed of 214.18 in the third qualifying session.

After transmission issues forced her to not make a pass during the second qualifier, Enders and her team came together for the last two runs of the day, sending her into Sunday on a positive note. She was also quick to praise her Elite Motorsports teammates, including Stanfield, rookie Marty Robertson, who made a career-best pass of 6.513 at 211.46 and Troy Coughlin Jr., who went an impressive 6.481 at 212.26 in his Pro Stock debut.

“That last run was honestly pretty conservative, but it gives us a lot of confidence going into tomorrow,” Enders said. “All of the Elite cars have been great. It’s been really cool to watch all the new drivers – Troy Jr., Marty, Aaron – and they’ve done an awesome job. You couldn’t have asked for a better day. It’s been cool to see all the people who worked on this, see their hard work come to fruition. It was unbelievable today.”

Enders also promises to be locked in for eliminations. With more excellent conditions slated for Sunday in Orlando, Enders knows it will take something big to come away with $75,000.

“I definitely think you’re going to have to come out swinging,” Enders said. “You can’t lay back at all.” 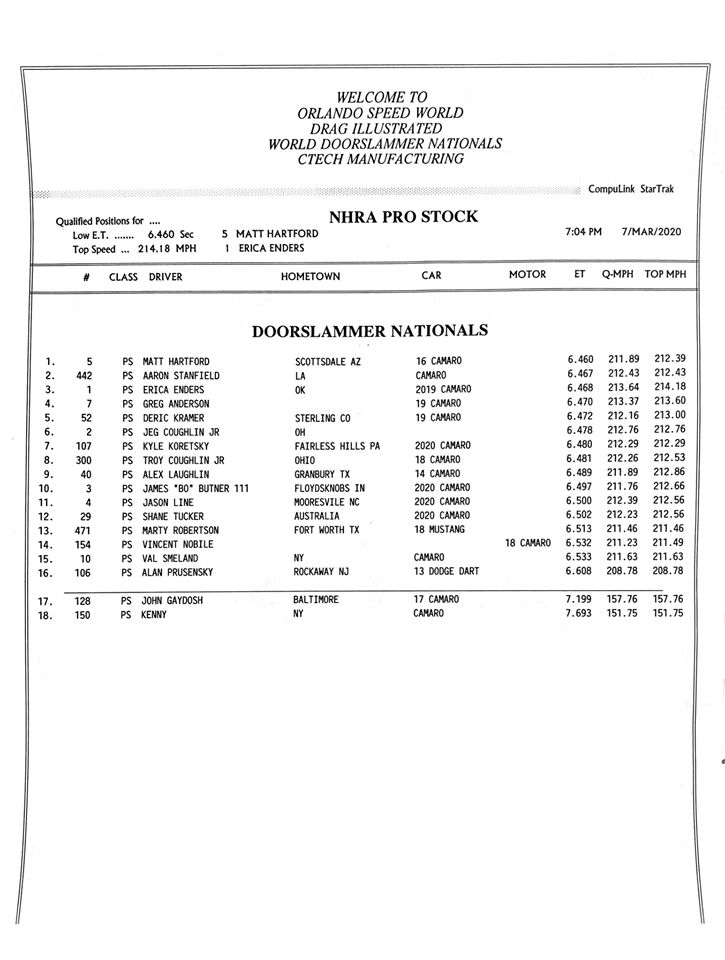