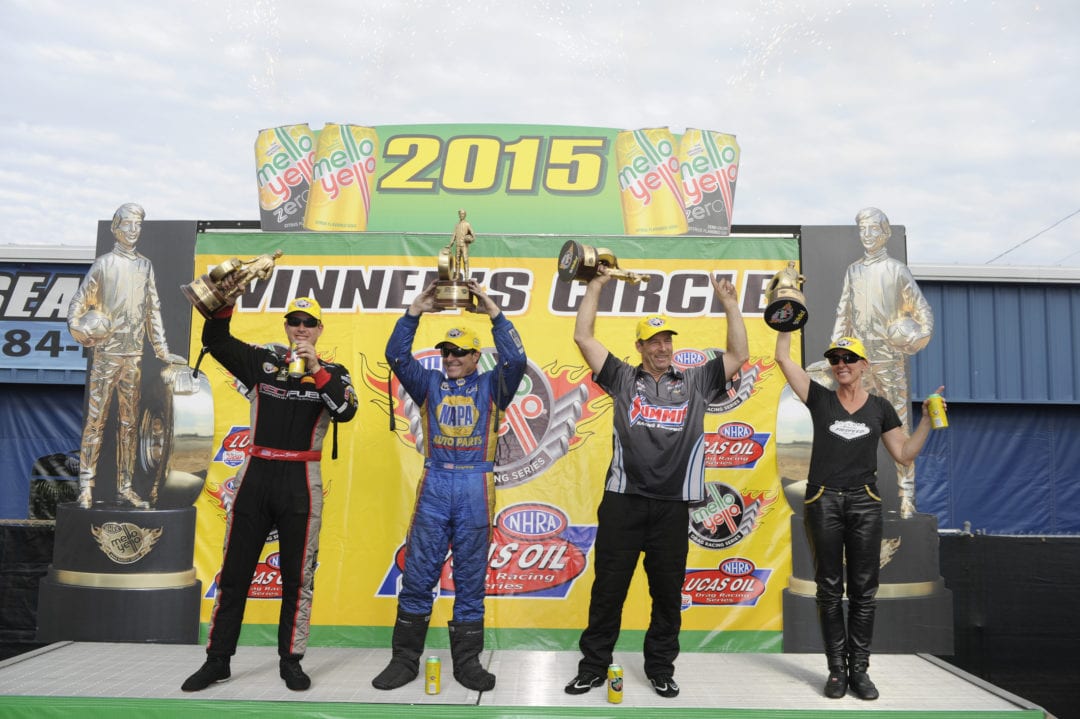 Massey piloted his Red Fuel dragster to a holeshot victory, winning with a performance of 3.882 seconds at 320.74 mph to defending world champ Tony Schumacher’s quicker but losing 3.873 at 313.29 in the U.S. Army dragster. It was Massey’s first win at Gainesville and 18th of his career. The victory moves Massey into a tie with Shirley Muldowney and Darrell Gwynn for 12th on the all-time wins list in Top Fuel.

“Tony has been running really strong,” said Massey, who moved to third in points with the win. “I know that he can step his game up and be deadly when he needs to on the starting line. We’ve got four new members on the team and three of four haven’t won a race. Now they’ve won the Gators.”

It was Schumacher’s second consecutive final round appearance of 2015, as he earned a victory at Phoenix in late February. With the runner-up finish he moved to third in points. 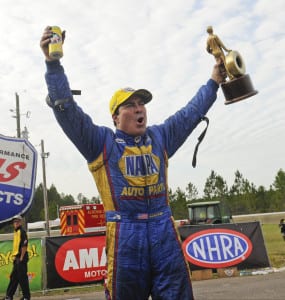 In Funny Car, Capps drove his NAPA Auto Parts Dodge Charger R/T to a performance of 4.115 at 311.05 to take the victory over first-time finalist John Hale. The win was Capps’ first of the season, third at this event and 44th of his career (43rd in Funny Car). The win tied him for second all-time on the Funny Car wins list. Following the victory, Capps moves to second in points behind Don Schumacher Racing teammate Matt Hagan.

“When you’ve got a race car like today, you almost wait for something to go wrong,” said Capps, who last won in Brainerd last season. “I’ve driven for almost 18 years and I feel like I find myself driving the car as if I am driving something that’s just so far behind the other cars. I think that really helped me this weekend.”

Anderson claimed his milestone 75th career victory and first in Pro Stock since Englishtown in 2012, when he clocked a 6.538 at 213.43 to defeat teammate Jason Line in an all-Summit Racing Chevy Camaro final round. Anderson’s third Gatornationals win moves him to sixth in the points standings. 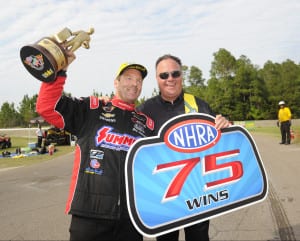 “It’s a special day and weekend,” said Anderson, a four-time Pro Stock world champ who had off-season heart surgery prior to the start of the 2014 season. “It was my birthday yesterday so it’s pretty darn cool. A year ago I couldn’t even come to this race [due to the surgery]. It was a great day for Greg Anderson, KB Racing and everyone involved with us.”

Line continued an impressive start to the 2015 season with his runner-up finish. He won the season-opening event at Pomona and this final round result was his 40th career runner-up finish. Line, a two-time world champ, sits second in points.

In Pro Stock Motorcycle, Stoffer defeated three-time world champ Eddie Krawiec in the final with a 6.900 at 195.11 on her Suzuki Extended Protection Suzuki to claim her second victory at this event. Appearing in her first race since Indianapolis in 2013, Stoffer defeated Steve Johnson, Angie Smith, and Shawn Gann en route to the final. The win was Stoffer’s first since Denver in 2011 and her seventh overall. 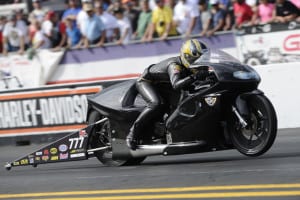 “We had a lot of heart and a lot of passion,” Stoffer said. “We don’t have a big budget but we certainly have a big heart. We certainly tried to get some high performance out of it and we were able to do it. The boys worked hard, worked till about midnight each night and gave us a good bike on Sunday.”