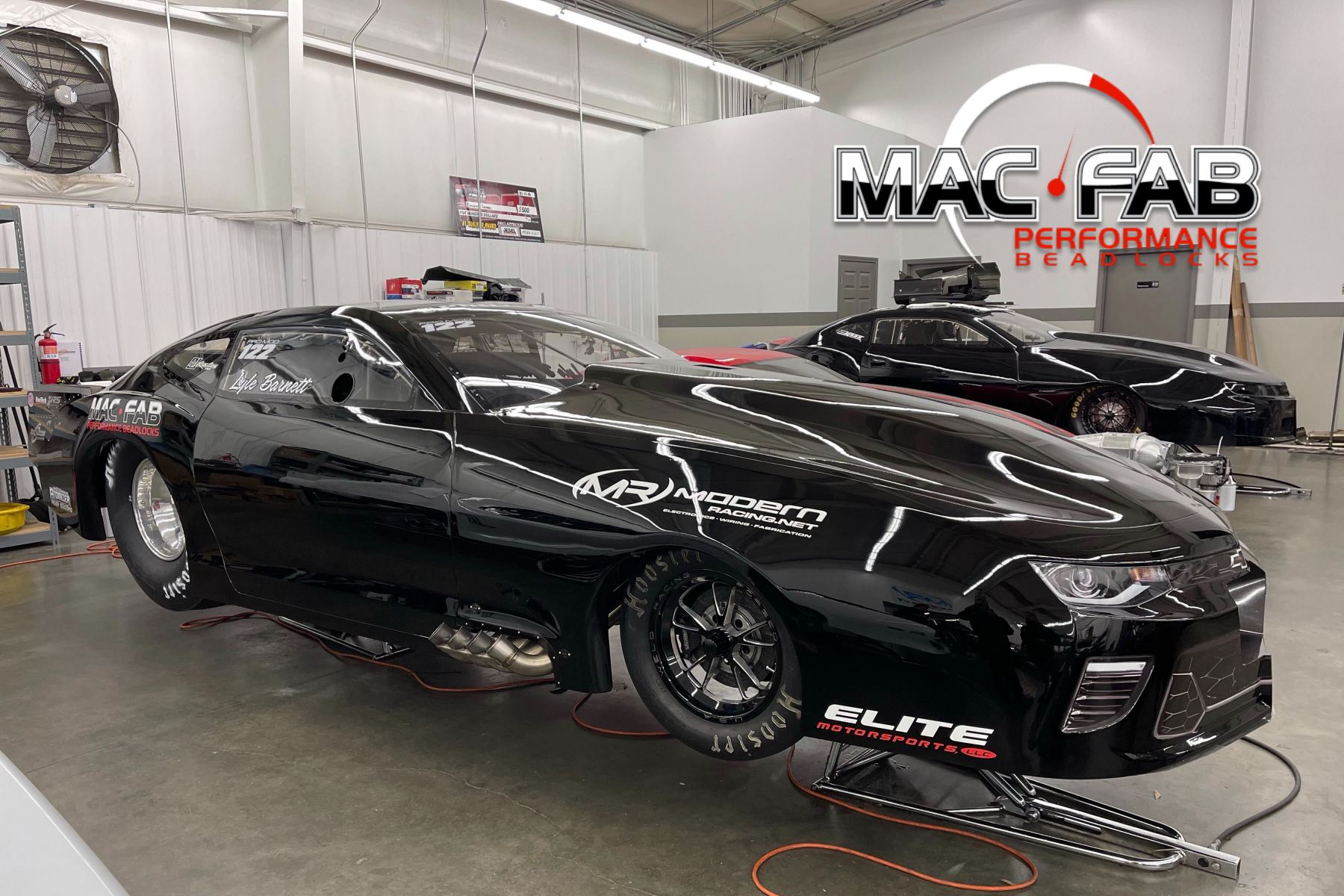 Mac-Fab Performance Beadlocks, a drag racing wheel beadlock conversion specialist, has signed on as the primary sponsor for Lyle Barnett as he makes his quarter-mile Pro Mod debut in the ProCharger-boosted Modern Racing/Elite Motorsports ’17 Camaro.

Mac-Fab owner Tommy Kirk has been involved in Barnett’s racing career since it started. Barnett and his dad, Mark, bought their first race car from Kirk and ran it out of his race shop. Barnett was later tapped to drive multiple cars owned by Kirk. Mac-Fab has sponsored Barnett through his stints in X275, Radial vs. the World and now Pro Mod.

“When the Pro Mod deal came up, Tommy was one of, if not the first to come to us and say, ‘I don’t know how I can help, but I want to,’” Barnett said. “He’s been just as much a part of the progression of my racing career as anybody else, my dad included. He’s been a huge help and is a great friend. We’re as much best friends as we are business partners, I guess you could say.”

For Kirk, sponsoring Barnett is much more than an opportunity to grow his business. It’s about supporting a longtime friend in taking a major step up to racing on one of doorslammer racing’s biggest stages.

“It’s pretty cool to see Lyle get this opportunity after what he went through,” Kirk said, referencing a fiery crash in 2015 that left Barnett with intense burns. “He’s always been a better driver than I ever was. That’s why he drove most of my cars. He’s always been super-competitive, almost to a fault. But you’ve gotta love his drive and ambition. He’s all business when he jumps in the car.”

Mac-Fab specializes in beadlock conversion for spun, forged, or cast aluminum racing wheels. Their custom beadlock rings can be welded to wheels from a wide range of manufacturers. Most of the company’s current customers race within the popular drag radial classes, but Kirk plans to expand.

“We’re looking to take Mac-Fab to the next level,” Kirk said. “Right now we’re pretty much into the drag radial scene. We want to get into bracket racing, Top Sportsman and classes like that. We have some new products coming out that are stronger, lighter and faster than our competition. We do beadlocks extremely well and we have new sizes coming out, all the way up to 26-inch beadlocks for the ‘donk’ racing guys.”

After serving as primary sponsor for the Barnett’s first two races of the season, the company will move to the associate sponsor role for the rest of the 2021 NHRA Pro Mod season.

“It’s awesome that someone who’s been a part of my racing career from day one is still riding with me,” Barnett said. “Now I get to take Mac-Fab beadlocks, the best beadlock in the business if you ask me, to the national stage. It’s just cool.”

Barnett is actively seeking additional partners to join Mac-Fab for the rest of the 2021 season.