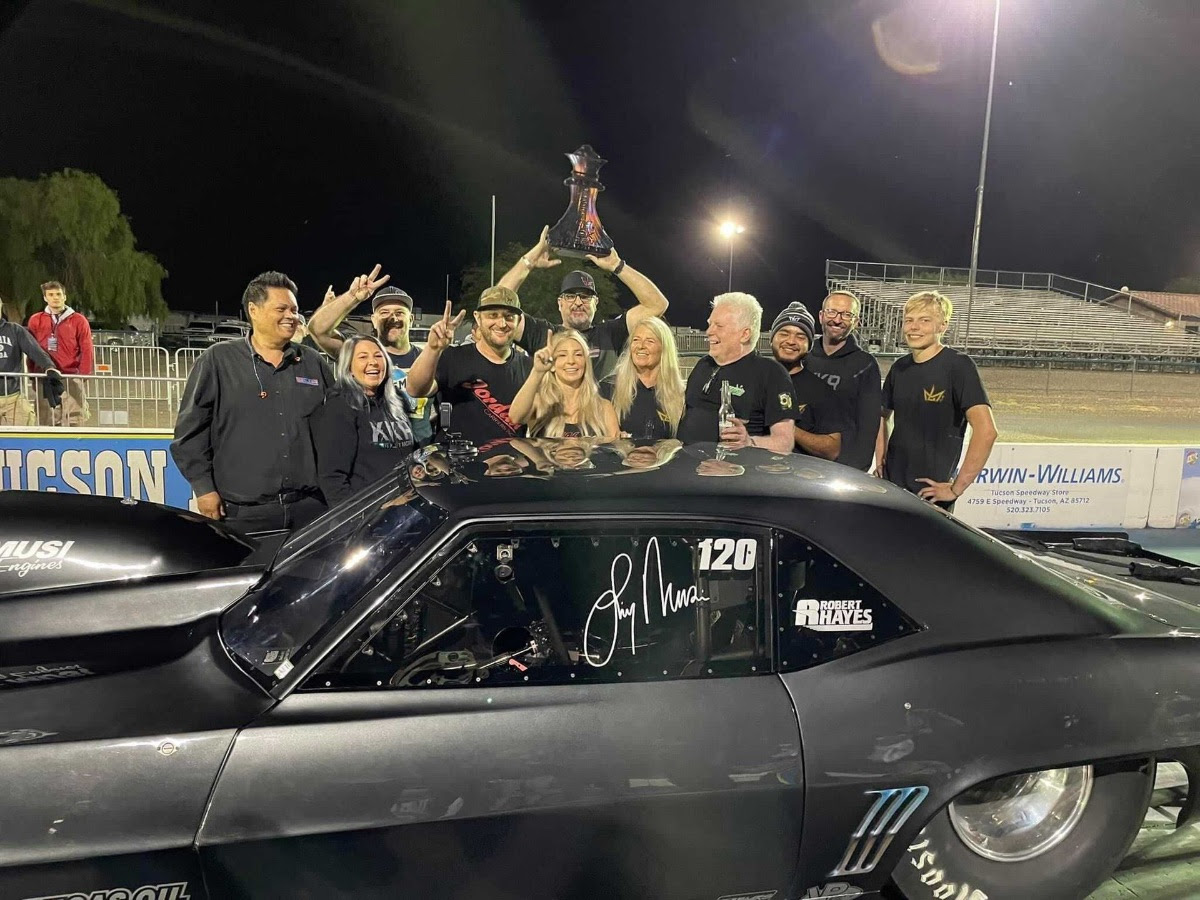 Eight weeks after a harrowing top-end crash at Darlington Dragway, Lizzy Musi and the Musi Racing team pulled off an incredible turnaround, winning the Street Outlaws: No Prep Kings event at Tucson Dragway.

With the event marking the return of the new nitrous-powered “Bonnie” Camaro that debuted earlier this year, it was a storybook finish for Musi and the team. She knocked off fiancé Kye Kelley in the final round, picking up her first win of the season in a triumphant story of perseverance.

“It’s been a whirlwind of a year,” Lizzy said. “From struggling with (the old car) ‘Aftershock,’ to figuring out the new car and then crashing the brand new car, it hasn’t been an easy season for us. A lot of blood, sweat and tears have been shed. To come out and win with a freshly rebuilt car and beat the fastest guys (in) No Prep Kings was a huge accomplishment.”

It was a total team effort from the moment the team got the car back following the crash. Robert Hayes rebuilt the car in just 45 days, an incredible feat that was backed up with an outstanding performance on the track.

The Edelbrock and Lucas Oil-powered Camaro delivered from start to finish, and Musi was impressive behind the wheel, taking out Ryan Martin in the quarterfinals and then Shawn Without to reach the final round.

In an all-nitrous championship round, Musi took down Kelley in a win-win situation for Pat Musi Racing Engines. Pat Musi praised the work of his team, which includes Elliott Loe, Jeremy Aceituno, and his wife, Liz. Musi also commended the remarkable job Hayes did to rebuild the car to not only show up, but be capable of winning the race as well.

“It was good for Lizzy, it was good for the whole team. It was pretty cool and everyone knows we’re for real now,” Pat Musi said. “We’ve got a pretty fast hot rod thanks to everybody. Robert Hayes put that thing back together in 45 days, which is amazing. I also have to thank Adam Drzayich for working with Robert to really dial in our setup and get this car working flawlessly. The whole deal just works together and that’s what it takes.

“Everyone deserves credit and it takes everyone to have success. Lizzy did not have a glitch in her driving all weekend. She stayed focused, did her job and deserves a lot of credit. Everyone did their job. It’s a team and I like the fact her and Kye raced in the finals.”

The victory also had some meaningful historical significance for Musi.

He won from the same lane as his daughter did 40 years ago at Tucson Dragway, taking the AHRA Pro Stock victory in 1981. It added another surreal moment to the win, which puts the team on a great path to end the season.

The stop in Tucson is the start of a rigorous finish to the 2021 No Prep Kingsseason, as the series closes the year with six straight race weekends. It doesn’t leave much time to celebrate as the Musi Racing team goes straight from Tuscon to Denver this weekend, and then to Tulsa, Dallas, Belle Rose and Bradenton to close the season.

But Musi knows his team will be ready and after a thrilling victory like last weekend, they’re ready for a big finish.

“This new car has been good from day one,” Musi said. “We made a few set-up changes, but everybody is working. Everything came together in Tucson, Lizzy got comfortable in the car and who would have thought, 40 years later my daughter would win in the same lane. It’s pretty amazing. Now we’ve got six races in a row and we better have our ducks in a row. It’s going to take a lot, but we’re ready for it and it’s great to start this stretch like this.”