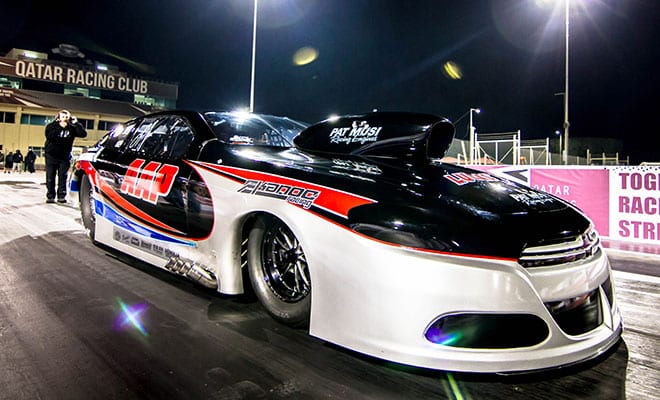 Pro Nitrous star Lizzy Musi has rewritten the history books in more ways than one during her tenure in the Middle East for the Arabian Drag Racing League Pro Series.

In winning Round 4 of the series at Qatar Racing Club in Doha, Qatar, she became the first female driver to win a race in the series’ history. At the previous event, Round 3 at Bahrain International Circuit in Sakhir, Bahrain, she recorded what was, at the time, the quickest elapsed time in Pro Nitrous history with a 3.663-second blast in her Jerry Bickel-built, Frank Brandao-owned 2015 Dodge Dart backed by Al-Anabi Performance (AAP).

“To get a win here, as a woman, was a big deal and I’m honored to be a part of this team,” said Musi. “I hope it can serve as inspiration for other women out there.”

Though the team is clearly headed in the right direction, getting to this point wasn’t easy.

“This car has always been fast and we felt confident coming overseas with it, but when we got here it was just tire shake, tire shake, tire shake,” Musi admitted. “But working with Justin Elkes from Modern Racing and Adam Lambert of Precision Racing Suspension, along with my dad (Pat) and our crew, we got it sorted out and this car is just consistent and quick every time now. It’s a dream to drive now.

“The facility here in Doha is unbelievable, and everyone treats us like family. The way the track is prepped over here, it’s just unreal. It’s so tight and you can really pour the coals to it,” Musi continued. “The consistency and just making lap after lap has helped not only our team, but my confidence as a driver. We don’t do a ton of testing back home and I really don’t have a lot of laps in this car if you really think about it, so this has been very beneficial for us and it’s what set up our win and the record run.”

Musi knows things will be a bit different when she returns home to Mooresville, North Carolina, and begins preparation for the upcoming Professional Drag Racers Association (PDRA) season. Conditions will change, but the information and experience gathered over the winter in the Arabian Pro Series will be invaluable. Plus, she’ll be returning with the same car, engine, crew, and sponsor.

“This is the same Musi 959 engine that we ran so well with last season, and we just keep refining it and making it better,” Musi said. “The same engine is in Mahana Al-Naemi’s car, and he and I keep trading records back and forth right now. We’re so fortunate to have the support of Sheikh Khalid bin Hamad Al Thani and AAP, and we’re looking forward to having them on board for the 2017 PDRA season.”

As qualifying gets underway for the fifth and final race of the winter series, the 26-year-old driver is focused on backing up her performances and taking home another win and possibly the championship.

“I have to thank my dad and the crew. Tommy Franklin has helped us a lot, as well as Ronnie Viccaro, Chris Murray, Donnie, and Shorty,” Musi concluded. “It was great to get that first win over here, and it would be just as sweet to wrap up the series with another win and the championship. We have the car to do it, and I’m focused on holding up my end of the bargain as the driver.”